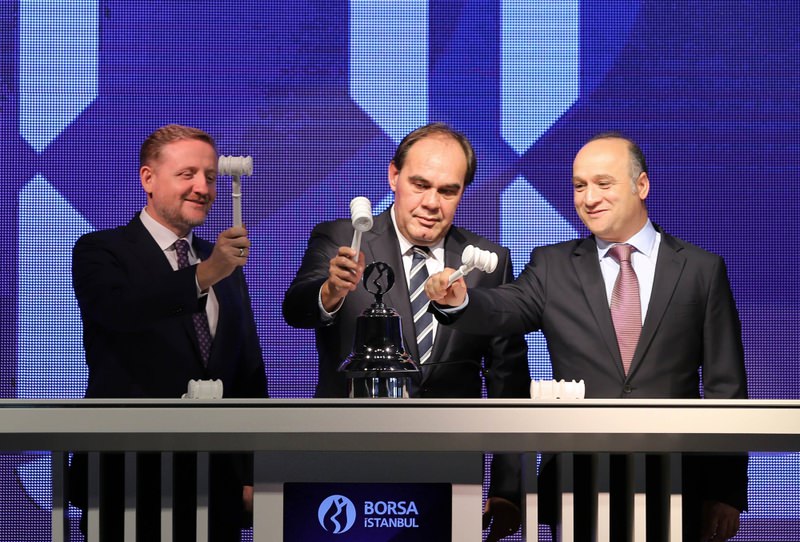 While Turkish football teams are finalizing signing one player after another, investors and the fan base want to see success. The BIST general manager wants to see more clubs go public as the Turkish Super League grows

The four major clubs, whose shares are traded in the Istanbul Stock Exchange (BIST), are having a busy transfer window. Since June 9, the opening of the transfer period, football clubs saw their shares rise by 11 percent to 24 percent, while the benchmark BIST100 index performed poorly. Having spent the most on transfers, Fenerbahçe's shares increased 24.7 percent. Beşiktaş recorded about 10 million euros surplus from transfer activities, which reflected to a 13.3 percent increase in the value of their shares. Yet to splash the cash so far, Galatasaray has seen its shares rise 11.4 percent and belt-tightening Trabzonspor's shares increased 13.2 percent. Between June 9 and Aug. 10, the BIST100 index dropped 0.4, meaning that the sports index yielded significantly above the stock market average. Fenerbahçe's Robin Van Persie and Nani, Beşiktaş's Mario Gomez, Galatasaray's Lukas Podolski, Trabzonspor's Dame N'Doye and Stephane M'Bia were the highlights of the transfer season so far.

While the big-name signings have had a positive effect on the stock market for these clubs, ALB Forex Research Specialist Enver Erkan suggested that the equity prices will fall if these clubs perform poorly, such as being eliminated from European competitions. Thus the expectations of the fan bases are important determinants of stock exchange movement, Erkan said, adding that fans expect success that brings in money. The supporters will flock into the stadiums or watch the games only if they have hopes and high expectations from their clubs, hence generating money for the clubs, Erkan said, pointing at how Fenerbahçe's Champions League exit reflected badly on its shares following the rise throughout July. A similar thing happened to Trabzonspor when they were eliminated from the Europa League. On the other hand, shares in Galatasaray and Beşiktaş were more stable than the aforementioned clubs. Enver Erkan added that a rally to stocks could occur between September and December as the season begins.

Fenerbahçe paid a total of 32.2 million euros to summer transfers, with their net transfer spend at 28.7 million euros. They also generated a lot of money through sponsors as they agreed to feature Turkish Airlines on their jersey in European competition matches and signed a $90-million-deal with Yıldız Holding for the name rights of the Şükrü Saraçoğlu Stadium for 10 seasons.

Beşiktaş's profit from transfers amounted to 9.75 million euros, and the club will compete in the UEFA Europa League, which contributes to their stock valuation. The clubs' main expenditure remains the construction of their new stadium, the Vodafone Arena.

Galatasaray has a balanced budget as the new transfers came in for relatively cheap compared to transfers in previous years. The transfer fees received offset the transfer fees paid with 5.9 and 4 million euros respectively. The fact that they are going to start from the group stage of the UEFA Champions League as the only Turkish club in the competition will provide Galatasaray with a significant amount of income.

Trabzonspor haven't spent much on transfers during this summer, contrary to last summer's 34.5 million euros expenditure. The Trabzon side signed N'Doye for 3.15 million euros while adding the rest of the players to their squad for free. Trabzonspor made an income of 4.5 million euros from the transfer of Waris Majeed who signed for the French club Lorient, but the club won't be competing in Europe this season.

Meanwhile, the 2015-16 season started with an organization in Borsa Istanbul yesterday. Turkish Football Federation (TFF) President Yıldırım Demirören, Football Clubs Association President Göksel Gümüşdağ and Borsa Istanbul General Manager Tuncay Dinç have been to the organization where they hit the gong to symbolically start the season. Demiroren said during his speech at the ceremony that football clubs lead the list of world-known Turkish brands, and the TFF aims to expand to a level that every club in the Super League has their shares traded on the Istanbul Stock Exchange. Meanwhile Tuncay Dinç wished for "a season of sportsmanship and fair-play," expressing that as the Borsa Istanbul family they want to see a year full of achievements in Europe, friendly competitiveness and, of course, goals. Dinç added that they would like to see the clubs visit Borsa Istanbul to lift their trophies with them, calling out to other teams and firms to adopt the vision of institutionalization and sustainability that the four major clubs of the Super League have and have their shares offered to the public.
Last Update: Aug 13, 2015 2:17 am
RELATED TOPICS