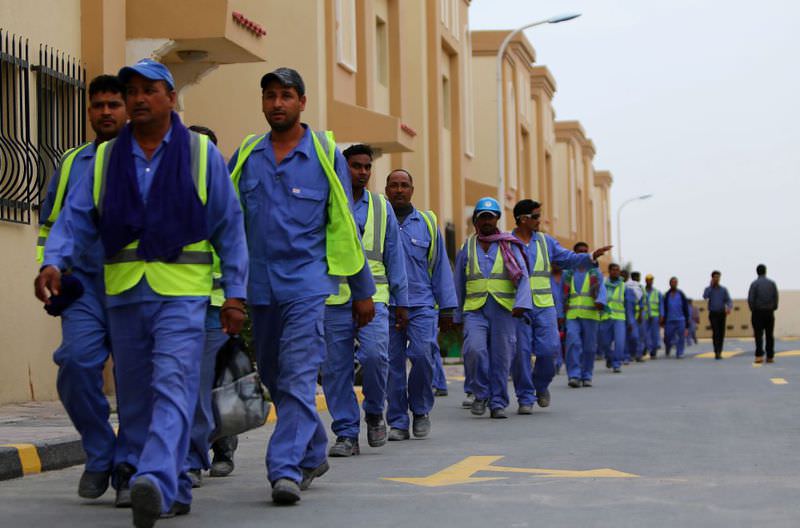 by Aug 18, 2015 12:00 am
Qatar officially launches one of its most "significant" labor reforms on Wednesday to guarantee migrant workers' wages, but rights groups are concerned over implementation of the new regulations.

The Wage Protection System (WPS) aims to ensure that migrant laborers, many working on 2022 World Cup-related projects, will finally receive their pay on time.

Under the new system, workers will be paid either twice a month or monthly with the wages electronically transferred directly to their bank accounts.

Failure to pay salaries on time, especially for blue collar workers, has been one of the biggest complaints voiced by rights groups against companies in the energy-rich Gulf state. A 2013 academic study, "Portrait of Low-Income Migrants in Contemporary Qatar," found that around one-fifth of migrant workers were "sometimes, rarely or never" paid on time. On Aug. 18, a six-month grace period for businesses to ready for the electronic payment system expires.

From that date, companies that fail to pay staff on time could face fines of up to 6,000 Qatari riyals ($1,650), be banned from recruiting new staff and bosses potentially sent to jail. Inspection teams will monitor the new system and identify any firms not complying with the regulations. The WPS is being overseen by the Ministry of Labor, which has previously pointed to its introduction as proof of Qatar's commitment to labor reform. In May, the ministry cited the WPS as an example of the "significant changes" being introduced in response to furious criticism of its labor practices since the controversial decision to allow Qatar to host football's biggest tournament.

Amnesty International, which has previously criticized Qatar for its "slow" pace of reform, said the introduction of the WPS was "welcome." "It's a positive step in principle," Amnesty's Gulf migrant rights researcher, Mustafa Qadri, said. However, Amnesty still has concerns about what will actually happen in practice following the deadline on Tuesday. It has called on Doha not to make any last-minute concessions to business or extend the grace period and also to ensure the WPS will be rigorously enforced.

Doha has said it backs "effective and sustainable change" and says the WPS, like Qatar's promise of accommodation improvements for 250,000 workers, demonstrates a commitment to this end. But reform of the WPS only adds to the calls for change elsewhere, specifically the biggest reform of all, scrapping of the controversial "kafala" system, which limits the movement of foreign workers. Qadri called "kafala" the "elephant in the room" and said the changes being introduced on Aug. 18 should open the door to further reforms.

He referred specifically to the ending of the controversial "kafala" system which has been likened by some critics to modern-day slavery. Qatar has pledged by the end of 2015 to abolish the system under which employers retain workers' passports and workers are not allowed to change jobs.
RELATED TOPICS