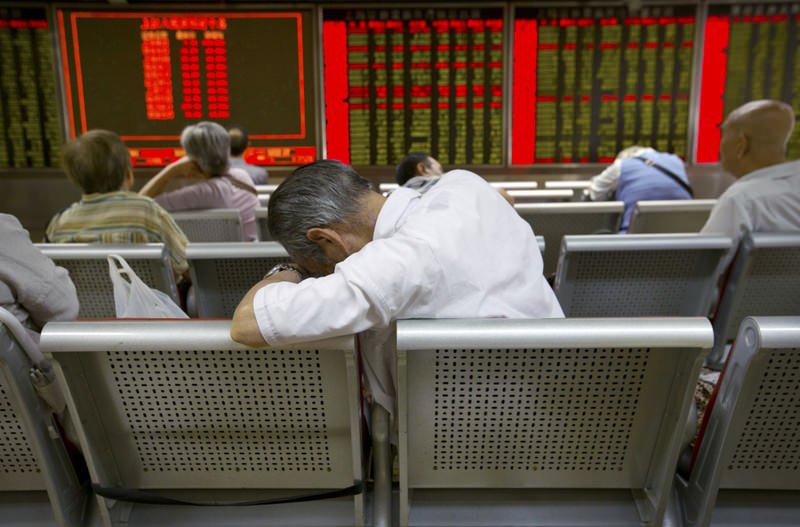 Chinese investors monitor stock prices at a brokerage house in Beijing, yesterday. China's main stockmarket index has fallen for a fourth day, plunging 7.6 percent to an eight-month low.
by Daily Sabah with Wires Aug 26, 2015 12:00 am

While most Asian and European markets are bouncing back from heavy losses, the Chinese stock markets continue on downward trend inducing panic among local investors and worry for global markets

Chinese stocks fell Tuesday for a fourth day, hitting an eight-month low amid signs Beijing was no longer buying shares to stem a price slide, and Japanese stocks also dropped. But other Asian and European markets bounced back from a day of heavy losses.

U.S. stock futures were also up after Monday's global sell-off and a tumultuous day on Wall Street, where the Dow Jones closed down 3.6 percent. Analysts said it was unclear whether the rebounds in some markets were indications that worst was over or a reprieve in a longer-term bear market.

The dollar motored ahead against most major currencies, rising 1.4 percent against the yen and 0.65 percent against its currency basket as the stimulus boost to the world's number two economy gave impetus to the case for a near-term interest rate hike in its biggest. Global markets were pummelled on Monday, with Chinese shares falling 8 percent, prompting investor calls for remedial action from authorities that grew louder overnight after the Shanghai Composite Index slumped a further 8 percent.

"The stock market might fall further in the near future because investors are in a panic," said market analyst Zhang Yang at Sinolink Securities in Shanghai.

Beijing appeared to be abandoning a strategy of having a state-owned company buy shares to stem the slide. There have been no signs of large-scale purchases by the China Securities Finance Corp. during the past week. "The fear is that the Chinese economy is slowing at an alarming pace and that the domestic policy makers have fallen well behind the curve," said Credit Agricole CIB in a report. "There is therefore little that" American, European or Japanese central bankers "could do to lift the market risk sentiment."

Economists said Tuesday's response - a 25 basis point cut in key rates and 50 bps off the reserve requirement rate for large commercial banks - sent a clear signal that Beijing, which has stepped in several times this year to keep China's high-powered growth on track, was still willing to intervene.

But as asset prices eased back following the initial euphoria, some questioned whether the measures would help.

"Investors have been waiting for them to act and they have," said Kallum Pickering, senior economist at Berenberg.

"Is this sufficient? It might not be but it does set a precedent that they are engaged and looking to prevent any further declines."

As the previous day's rush for safety reversed, German Bund yields also rose with the 10-year benchmark up 11 basis points at 0.69 percent. Yields on safe-haven U.S. Treasuries were also up.

"The PBOC (central bank) is doing what it has to do but it is very likely it is not enough so more will have to be done," said Wei Yao, China economist for Societe Generale in Paris.

The stock market gains in Europe, which recouped the bulk of the 5 percent-plus lost the previous day when around 450 billion euros ($520 billion) was wiped off the FTSEurofirst 300's value, were also supported by takeover news.

With China the world's biggest consumer of commodities, crude and metals markets also responded, albeit relatively modestly, to Beijing's move.

U.S. crude futures traded at $39.40 per barrel, up 3.1 percent on the day, while Brent rose 2.9 percent to $43.91. But global oversupply and worries over the severity of the slowdown in China kept oil prices near the 6-1/2-year lows they fell to on Monday, when the market slumped 6 percent.

Copper, often considered a proxy for global economic activity, rose 1.65 percent to $5,038 a tonne. In China where recent market volatility has been at its most extreme, the central bank's policy move - coming on the heels of a shock devaluation of the yuan two weeks ago - drew a guarded reaction.

"This is a big-bang move... Frankly (it) shows a bit of panic in my mind," said Andrew Polk, resident economist at the Conference Board in Beijing.
RELATED TOPICS