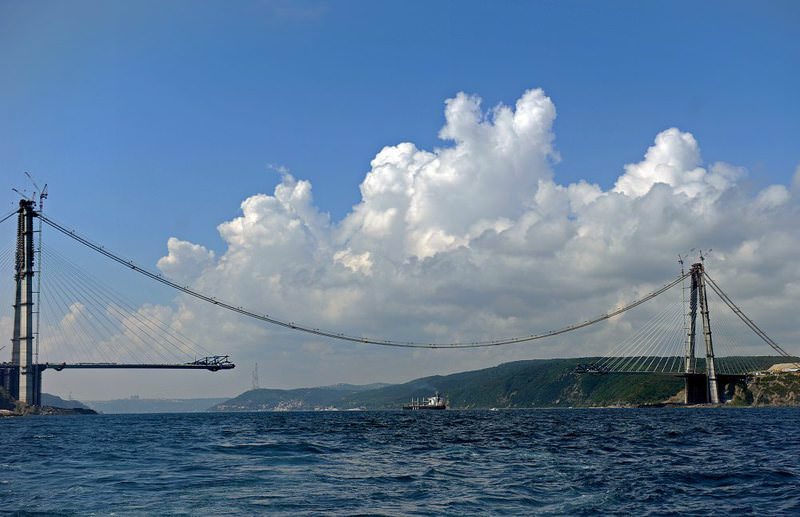 by Daily Sabah Aug 28, 2015 12:00 am
Tenders for the construction of the linking roads for the Yavuz Sultan Selim Bridge have been postposed once again. A tender will be held for the Kurtköy-Akyazı linking road in March 1, 2016, and for the Kınalı-Odayeri linking road on March 8, 2016, as part of the Northern Marmara Highway project.

The tender for the linking roads of the third bridge, which was originally supposed to be held on March 6, 2015, was postponed to May 6th. However, upon the requests of the companies applying to the tender, it was decided to hold two separate tenders on different days.

Accordingly, a tender for the Kurtköy-Akyazı linking road was originally supposed to be held on June 30. Then, it was postponed to Aug. 31. Finally, the government decided to hold the tender on March 1, 2016, with a newly released addendum. Similarly, the tender for the Kınalı-Odayeri linking road, which was supposed to be held on July 7th but was postponed to Sept. 7, was further delayed to March 8, 2016.

Construction expenses of the linking roads will be undertaken by the companies that will win the tenders. Companies are expected to complete the tender processes, expropriation and funding schemes within one year. In the meantime, the winning company or consortium will begin operating with its equity and large projects will be started after receiving the necessary funds.

Some parts of the Northern Marmara Highway have already been asphalted and are ready for use while the construction of Istanbul's third Bosporus bridge is getting closer to completion. The bridge will be the highest in the world in terms of the height of its suspension towers. The rail system that crosses the bridge will run from Edirne to İzmit, will be integrated into the Marmaray and Istanbul Metro and will connect Istanbul Atatürk International Airport, Sabiha Gökçen International Airport and the third airport, to be built on Istanbul's European side. The Northern Marmara Highway and the third Bosporus bridge are being built using a build-operate-transfer model.