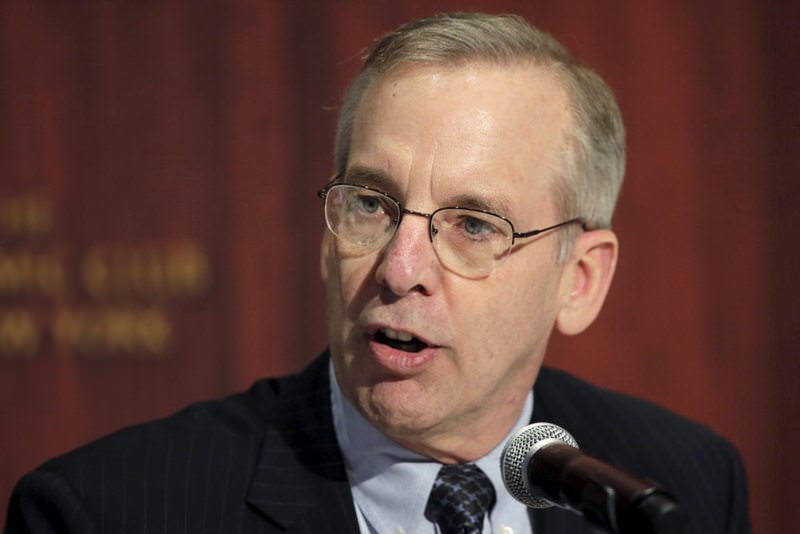 William C. Dudley, president and CEO of the Federal Reserve Bank of New York, said a rate hike in September ,seems less compelling.,
by Aug 28, 2015 12:00 am

Stocks rose around the world on Thursday, following the biggest gains on Wall Street in four years, after a U.S. Federal Reserve policymaker said the case for an interest rate increase next month "seems less compelling" than it was a few weeks ago.

In early European trading, the FTSEuroFirst index of leading 300 European shares was up 2.5 percent at 1,415 points. Germany's DAX, France's CAC 40 and Britain's FTSE 100 were all up more then 2 percent.

"Financial market volatility has increased the likelihood that the first Fed hike will occur later than the September meeting," said Angela Hsieh at Barclays. "The increasing likelihood of a later Fed lift-off has lifted market sentiment."

New York Fed President William Dudley said on Wednesday that arguments for a September rate increase "seems less compelling" than they had only weeks ago, given the threat posed to the U.S. economy by recent market turmoil.

Markets around the world plunged earlier in the week as a slump in Shanghai shares fuelled worries over China's economic health. Some calm returned after Beijing moved to ease policy late on Tuesday.

The two main Chinese indices surged 5.3 percent and 5.9 percent on Thursday, snapping a five-day losing streak that had wiped off around 20 percent from market value and sent tremors around global financial markets.

MSCI's broadest index of Asia-Pacific shares outside Japan rose 2.7 percent, pulling away from a three-year low reached earlier in the week and chalking up its best day in three years.

after U.S. stocks racked up their biggest one-day gain in four years.

U.S. futures pointed to a rise of around 0.5 percent at the open on Thursday, adding to the previous day's rise of almost 4 percent.

Dudley's comments on Wednesday came amid alarming market volatility and just before many of the world's top central bankers gather at an annual conference in Jackson Hole, Wyoming. Investors will be watching the conference how the turmoil may be shaking up policy plans.

Dudley also warned about over-reacting to "short-term" market moves, leaving the door ajar to raising rates when the Fed meets on Sept. 16-17.

"The damage to developed market shares has been done, though, with the S&P500 still down 7.5 percent on the month," noted Simon Smith, chief economist at FxPro in London.

Emerging markets stocks and currencies were rebounding on Thursday after Dudley's comments and a recovery by Chinese equities. MSCI's benchmark emerging market stocks index surged 2.5 percent as it looked to top Tuesday's best day in two years. In currencies, the Japanese yen fell as investors rediscovered their appetite for risk.

The dollar rose back above 120 yen, up a fifth of one percent on the day and recovering from a seven-month low of 116.15 yen plumbed on Monday. The euro rose a third of one percent above 136 yen.

The euro was kept under pressure by comments from a senior European Central Bank official. Peter Praet said falling commodity prices and weakness in some overseas economies had increased the chances the ECB would miss its inflation target.

The yield on 10-year German bonds rose 3 basis points to 0.74 percent. The equivalent U.S. Treasury yield was steady at 2.16 percent, having slumped as low as 1.91 percent on Monday.

Crude oil rebounded. U.S. crude futures bounced 4.2 percent to $40.20 a barrel. The contracts had slumped to a 6 1/2-year low on Monday, dogged by supply glut woes and worries about China's economy. Brent 4 percent to $44.81.

Gold regained some lost ground after suffering its biggest fall in five weeks overnight as the dollar rebounded and U.S. stocks rallied. Spot gold rose about 0.2 percent to $1,127 an ounce.