B20 offers to form set of common investment principles 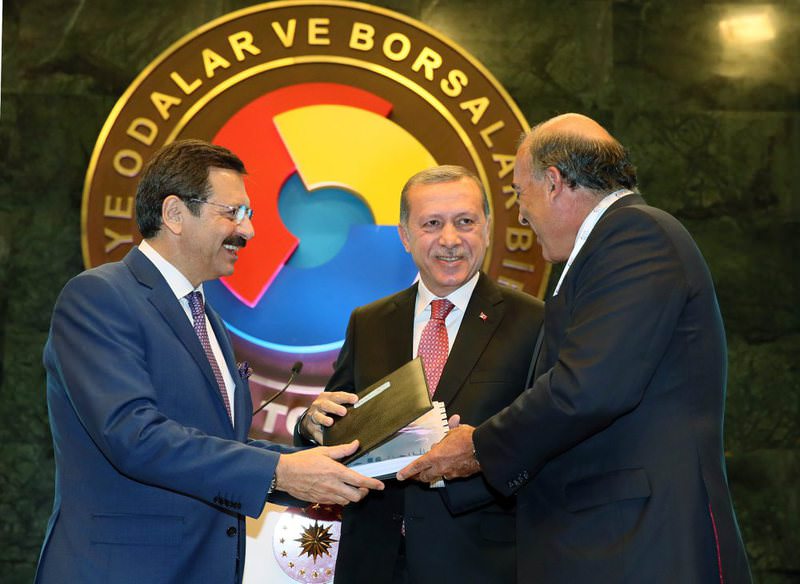 B20 representatives gathered in Ankara and agreed on 19 demands from G20 Leaders. The group suggests a common set of principles in international investment and easing the way of reaching finance for SMEs

Prepared to be presented at the G20 Leaders Summit, the B20 Turkey Report, which features a total of 19 demands from the global business world, offers the chance to form a common set of principles in international investment. B20 leaders gathered in Ankara on Thursday to focus on global economic issues.

President Erdoğan also attended the program where he called on G20 countries to turn the global financial crises into opportunities. Increasing inequality since the financial crisis must be addressed, particularly for women, Erdoğan told the world economic conference. "The elimination of youth unemployment is also a priority of the G20, with the goal of decreasing it by 15 percent," he said, adding: "We have set up the G20 agenda to address this employment issue."

The president also highlighted that Turkey was a successful example of integration in the global economy and other emerging economies should follow a similar path. He also asked the G20 countries to cooperate more to eliminate terrorism. "I invite the whole world to be sensitive and cooperate in the fight against terrorism," he said.

Furthermore, the report brought forward the demand of voting for the World Trade Organization (WTO) Trade Facilitation Agreement and bringing it into force.

Highlighting that the global finance reform agenda should be finalized and voted on, the B20 Turkey Report touched on the significance of forming the integrity of laws and enhancing the process of advice, which is on the financial reform agenda.

The report, which features the demand the application of the G20's Ownership Transparency Principles in Companies, stressed the necessity for the development of programs intended to close the gap in technical, management and entrepreneurship gaps as well as the importance of financing these programs.

The report said structural reforms should be carried out in order to make the labor market more dynamic and inclusive and to increase employment opportunities. The labor force participation rate of women and young people should be boosted as well.

The report also indicated that data regarding Small and Medium Sized Enterprises' (SMEs) credit reliability should be made more transparent and accessible to enable SMEs to more effectively use financial instruments that reduce risks about credit procurement. It also said that SMEs' accession to alternative financing should be expanded with the harmonization of policies, regulations and standards. SMEs should be supported to comply with international standards and their access to international markets should be improved with capacity development and technical support programs.

The Union of Chambers and Commodity Exchanges of Turkey (TOBB) President Rifat Hisarcıklıoğlu said during the G20 meeting that the union organizes 12 meetings across five continents as a part of preparatory work for the G20 Summit. As a result of this process, the TOBB prepared B20 Turkey Report to offer it during the G20 Leaders' Summit, he added.
RELATED TOPICS