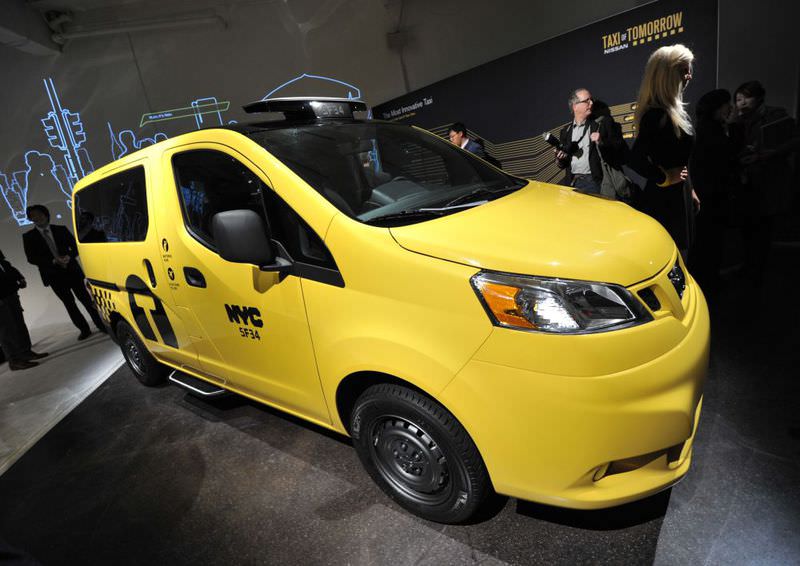 A far cry from the checkered cab that has been immortalized as part of the city's hectic image, the Nissan NV200 boasts cushy seats, adjustable air-conditioning in the back and a panoramic glass roof.
by Sep 05, 2015 12:00 am

As part of a deliberate strategy to fight back against online ride-booking services, the extra space the newly selected cars provide is hoped to give taxis an advantage over Uber's less standardized vehicles

As New York taxi drivers face surging competition from smartphone cab services, the traditional taxi force in the city that never sleeps is preparing to push back against the likes of Uber.

Spearheading that effort are a spacious mini-van - being phased in as the city's taxi firms renew their fleets - and a long-awaited phone app.

A far cry from the checkered cab immortalized as part of New York's hectic image, the Nissan NV200 boasts cushy seats, adjustable air-conditioning in the back, phone and laptop plugs and a panoramic glass roof.

Mr. Chan, 58, a city driver who declined to give his first name, described the minivan as more comfortable than the well-known Crown Victoria, although he has had little customer feedback so far.

New York authorities picked the Nissan to replace the city's ageing taxi fleet, as part of a deliberate strategy to fight back against online ride-booking services.

The extra space the cars provide is hoped to give taxis an advantage over Uber's less standardized vehicles.

City firms will have a choice between the NV200 and a hybrid vehicle, and the Nissan as they renew their fleets over the next few years. About 800 of the minivans already ply the streets of New York, according to Nissan, which touts them as a safer alternative to traditional cabs.

With a replacement rate of about 2,600 vehicles a year, according to Nissan, the bulk of New York's entire fleet of some 13,000 taxis is set to adopt the yellow minivan taxis over the next five years.

A big part of Uber's lure is that it allows people to summon rides and pay using smartphone applications, with no need for cash on hand or tips.

So the second other prong of the yellow taxis' push-back against Uber is an app of their own. Called "Arro," the New York taxi app launched Wednesday also allows users to call a cab using their smartphones' geolocation with the push of a button. Like Uber's app it provides information on where nearby taxis are, and how long it will take them to arrive. The app has been launched in some 7,000 taxis already and its backers are pushing for it to spread quickly. Arro currently doesn't take a cut of a ride in an effort to win market share, according to company spokesman Michael Woloz, who said the business model behind the app would continue to evolve. Keeping prices down is a key part of the battle with start-up companies - as highlighted by a Business Insider published in April which found that for average New York cab rides Uber costs more than the yellow taxi.

The city of New York capitulated in July in a long-running feud with Uber, agreeing to shelve plans to cap the number of vehicles operated by the online ride-booking service.

Uber said at the time it had 26,000 Uber driver-partners in New York, far surpassing the city's 13,587 iconic yellow taxis.

The intense new competition has many taxi drivers worried for the stability of their industry. "Business has slowed down a bit," said Chan. "I used to go to the airport three or four times a week. Now it's more like once every two weeks." Chan bought his license in 2004 for $240,000, but he is worried its value could be plummeting. "I don't know how much it's worth now, if it's worth something," he said.
RELATED TOPICS