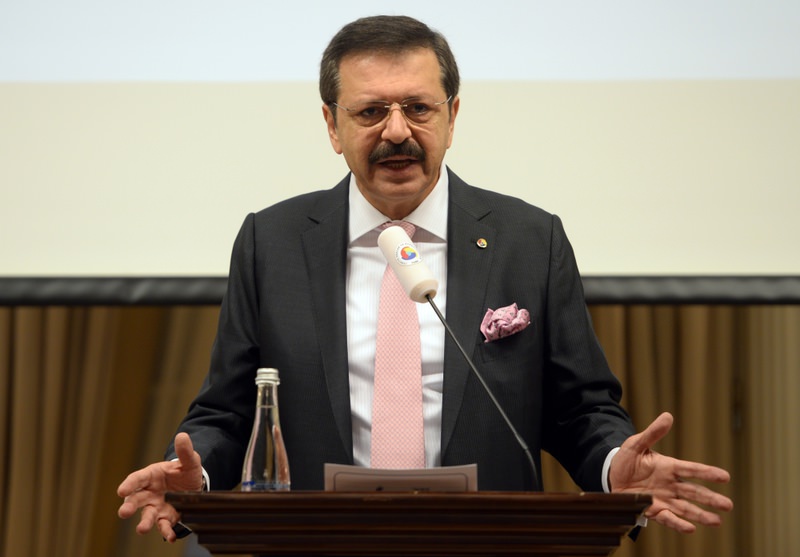 Chairman of the Turkish Union of Chambers and Commodity Exchanges (TOBB) and president of the B20, Rifat Hisarcikliou011flu
by Daily Sabah with Wires Sep 08, 2015 12:00 am

The PKK terrorist organization attacked Turkish soldiers in Dağlıca, Hakkari, in which an unknown number of soldiers were killed. Turkish business community leaders condemned the attacks and called for unity and solidarity

The Turkish business world condemned the terrorist attack on Turkish soldiers in Dağlıca, Hakkari, which killed an unknown number of soldiers and wounded dozens, with most of the leading chairmen or directors of business associations and chambers in Turkey issued condemnation letters. The chairman of the Turkish Union of Chambers and Commodity Exchanges (TOBB), Rifat Hisarcıklıoğlu, said that those involved in terror and those that support these people are committing a crime against humanity. He also said that now the feeling of unity and solidarity has increased and those who plan, support and perform terrorist acts should be aware of this.

The chairman of Independent Industrialists and Businessmen's Association (MÜSİAD), Nail Olpak, also said that attacks carried out by the PKK terrorist organization can never achieve their target. "These vicious and treacherous attacks on our national unity and solidarity, our brother and the Republic of Turkey's sovereignty and indivisibility will never reach their goal. The terrorist organizations should become aware of the fact that such attacks that target the peace and stability of our country only bring us closer. Our belief in Anatolian brotherhood will not be shattered even in these days," Olpak said.

Union of Turkish Agricultural Chambers General Manager Şemsi Bayraktar also issued a written condemnation letter and delivered his condolences to the families of the killed soldiers. His message was similar to Olpak and Hisarcıklıoğlu as he also said that such attacks like the one in Dağlıca and previously in Sur, Diyarbakır will not be adequate to discourage the nation and will not be able to reach their aim of destroying unity, solidarity or the country.

The Union of Turkish Agricultural Chambers' General Manager Şemsi Bayraktar also issued a written condemnation letter and delivered his condolences to the families of the martyrs. His message was similar to Olpak and Hisarcıklıoğlu as he also emphasized that such attacks in Dağlıca, Hakkari and previously in Sur, Diyarbakır will not be adequate to discourage the nation and won't be able to reach their aim of destroying unity, solidarity and entirety of the country.

The general director of the Confederation of Turkish Tradesmen and Craftsmen, Bendevi Palandöken, also condemned the attack: "We are deeply sorry and are in great pain for our losses. God bless our brave martyrs. And to their families I'd like to say, please accept my condolences."

The chairman of the Istanbul Chamber of Commerce (İTO), İbrahim Çağlar, also sent a message about the attack in Dağlıca. He referred to previous PKK attacks and said that the PKK only strikes when they are backed into a corner. Describing the attacks as "dastardly and cowardly," Çağlar also said that the attacks by the "terror organization with blood on their hands" are the sign of how incapable, powerless and desperate the organization is. "Those who dare to destroy our peace and brotherhood will be faced with our unity and solidarity and will pay for these attacks," Çağlar said.

The chairman of the Gaziantep Chamber of Commerce, Adil Konukoğlu, condemned anyone whether in Turkey or abroad who supports terror and gave the message to remain calm and hold on to each other as a nation. "These days will hopefully pass soon and our national unity and sovereignty will be the best answer to these attacks, which will never reach their target," Konukoğlu said.

The general director of the Union of Chambers of Certified Public Accountants and Sworn-in Certified Public Accountants of Turkey (TÜRMOB), Nail Sanlı, condemned the attack and sent his condolences to the families of those killed. He also wished for the attacks to come to an end. The chairman of the Federation of Drivers and Automobile Producers, Fevzi Apaydın, was another business figure who condemned the attack. "Those who are behind this attack are against humanity," he said.
RELATED TOPICS