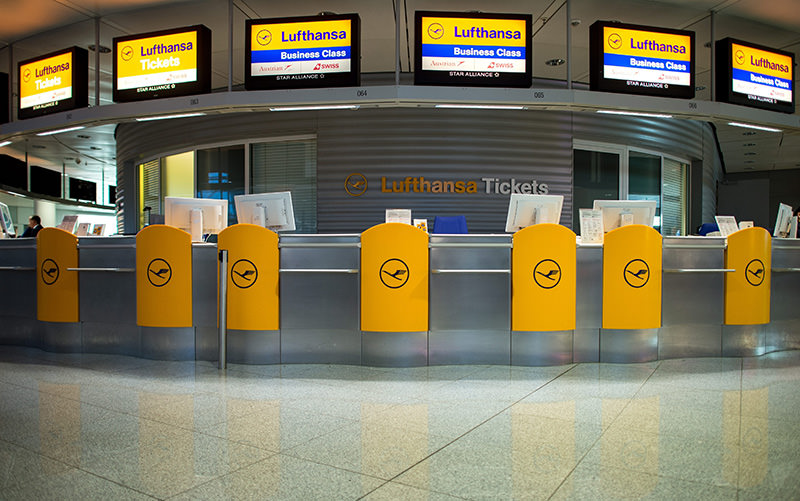 A Lufthansa check-in counter is deserted at the international airport in Munich, Germany, early 08 September 2015 (EPA Photo)
by Sep 08, 2015 12:00 am
German airline Lufthansa has announced it will cancel 1,000 short- and medium-term flights in and out of Germany on Wednesday, the second day of a two-day walkout by its pilots.

At the same time, the carrier said Tuesday it had filed a court injunction in a bid to prevent the industrial action -- the 13th walkout in 18 months -- as the company struggles to end a long-running dispute over early retirement provisions.

"One thousand Lufthansa flights are cancelled, 140,000 passengers will be affected," Lufthansa said in a statement after the pilots' union, Vereinigung Cockpit (VC), announced that it was extending a strike that began early Tuesday into a second day on Wednesday.

Out of a total 1,520 Lufthansa flights that should have flown on Wednesday, only just over 500 would go ahead, the carrier said.

Only Lufthansa services would be hit, while flights by the group's other airlines, Germanwings, Swiss, Austrian Airlines and Brussels Airlines would operate normally.

The carrier said it apologised to passengers for any inconvenience caused and added they would be able to rebook their flights free of charge.

Passengers on domestic, inner-Germany flights would be able to swap their tickets for a ticket on the German national railway, Deutsche Bahn.

The first day of the walkout on Tuesday had affected only long-haul flights, and but there would also be knock-on effects again on Wednesday, meaning that 52 of the scheduled 176 long-haul flights would be grounded, Lufthansa said.

Lufthansa filed an injunction with the labour court in Frankfurt to prevent Wednesday's extension, arguing it was illegal.

At the same time, management upped the ante, announcing it would seek damages of 60 million euros ($67 million) from Cockpit for the loss of earnings a first strike had caused back in April 2014, when the wage agreement with pilots at the time was still in force.

In the past 18 months, pilots have staged repeated walkouts, but suspended industrial action in March in the wake of the horrific crash of a jet belonging to Lufthansa's low-cost subsidiary Germanwings in the French Alps.

Lufthansa complained that it was "currently not possible to hold constructive negotiations" with the union.

Union and management have been locked in a bitter dispute since April 2014 over management plans to change the pilots' early retirement arrangements.

The dispute hinges on plans by Lufthansa to scrap an arrangement under which pilots can retire at 55 and receive up to 60 percent of their pay until they reach the statutory retirement age of 65.

Pilots are also concerned about Lufthansa's aim to further develop its low-cost activities as it faces growing competition.

Cockpit said Monday that it has made substantial concessions and accused management of seeking to "smash wage-agreement structures and demolish protective mechanisms in order to weaken the union."

Lufthansa has embarked on a massive reorganisation, farming out much of its domestic and medium-haul services to Germanwings.
Last Update: Sep 08, 2015 6:31 pm
RELATED TOPICS