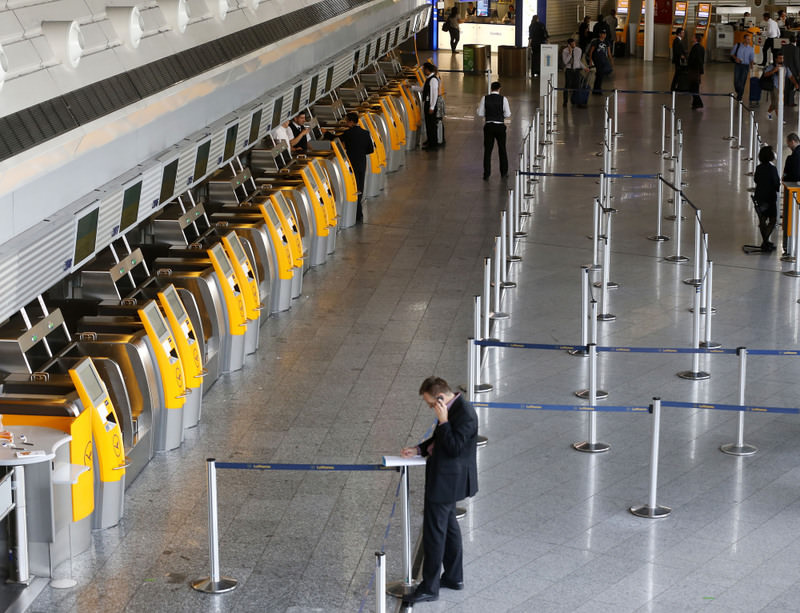 A passenger makes a phone call near empty Lufthansa counters when Lufthansa pilots went on a six-hour warning strike at the Frankfurt airport on Sept.5. The German Pilots' Association announced a one-day strike starting today.
by Sep 08, 2015 12:00 am

German carrier Lutfhansa's pilots announced a 12-hour strike at airports across the country after wage and pension talks failed last week. The strike will be the 13th walkout in 18 months

German pilots' union Vereinigung Cockpit (VC) has called an all-day strike for today at Lufthansa's long-haul and cargo flights, increasing pressure on management in a long-running dispute over pay, retirement benefits and cost cuts. The union said yesterday the strike, the 13th walkout in 18 months, would affect all long-haul passenger flights and all cargo flights out of Germany from 0600 GMT to 2159 GMT today. Lufthansa is trying to cut costs as it battles to maintain market share against budget rivals such as Ryanair, which are targeting Germany.

Relations between the union, which represents around 5,000 Lufthansa and Germanwings pilots, and management broke down again last week. The union has offered concessions, including increasing the average retirement age to 60 and looking at ways to bring costs down to a level comparable with easyJet.

"With our offer, we made it clear that the pilots are not against the necessary adjustments," VC spokesman Markus Wahl said in a statement yesterday. But as a precondition for talks, VC wants Lufthansa to halt the process of employing staff on non-German contracts for the expansion of its budget Eurowings division, which has an Austrian operating licence.

In an interview with Reuters on Friday, Lufthansa chief executive Carsten Spohr said over 1,000 pilots from within the Lufthansa group and outside had applied for jobs at the unit. "To create an airline's operating certificate in another country is something the other low-cost carriers do and we copied that model for our low-cost operation," he said.

Spohr's hard line with the pilots is reminiscent of peer Willie Walsh's stance with crew at British Airways and Iberia, with the cost cuts achieved helping parent group IAG to report stronger profits than Lufthansa or Air France-KLM.

IAG is this year aiming for operating profit in excess of 2.2 billion euros ($2.3 billion), while Spohr said on Friday Lufthansa would "comfortably" achieve its target for adjusted earnings before interest and tax of over 1.5 billion euros this year. That target does not include the impact of strikes, which have cost Lufthansa around 100 million euros this year already. However, analysts point out Walsh was negotiating during the financial crisis and when oil prices were high, whereas Spohr has a tougher job, given the backdrop of low oil

Lufthansa said yesterday it had offered talks over the weekend. VC said the offer provided no basis for talks. A spokesman for Lufthansa said it was confident of helping passengers to complete "a majority" of long-haul flights planned for today, either booking them onto other group airlines or different carriers.