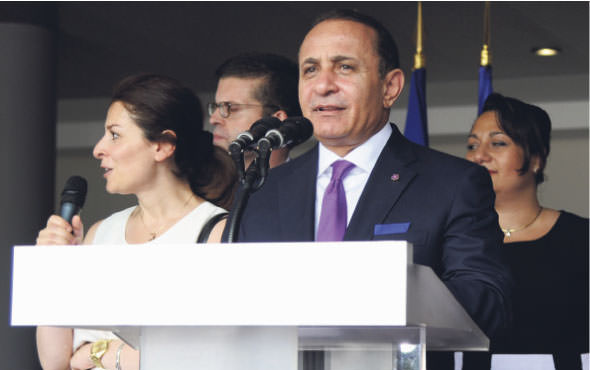 Armenia is negotiating a series of major trade and investment deals with Iran in the wake of international sanctions being lifted. Deals that have been disclosed include an Iran-Armenia rail line, Iranian gas transit through Armenia, an Armenia-Iran power transmission line, a north-south highway between Armenia and Iran, joint hydro power projects and a cross-border railway.

From Sept. 23-25, Armenian Prime Minister Hovik Abrahamyan will discuss the Armenia-Iran railway on a visit to China in an effort to attract Chinese investment in the project, Armenian News Agency NewsAm reported on Sept. 1. The Iran-Armenia railway is planned to be built over six years, and the project cost is estimated at $3.5 billion. To complete the project, Iran has to build the Julfa (Iran)-Meghri (Armenia) portion, a 90 kilometer stretch of rail line. Iran is prepared to construct the line up to the Armenian border on its own. However, the stretch of 120 kilometers on the Armenian side requires much greater investment and resources due to the need to dig tunnels through the mountainous terrain, NewsAm reported Sept. 1, adding that China Civil Engineering Construction Corporation (CCECC) Chairman Wu Wanliang expressed interest in participating in building Armenia's segment.

The Iranian envoy to Yerevan, Mohammad Reis, hopes Armenia can serve as the land link to facilitate transportation between the Persian Gulf and the Black Sea. He told journalists on Aug. 23 that an Armenian-Iranian intergovernmental commission is working on the issues related to the creation of infrastructure for Iranian gas transit to the West via Armenia.

Iranian Vice President Eshaq Jahangiri is scheduled to visit Armenia in October to review a number of joint infrastructure projects. During the visit, the timeline and other details of the construction of the third power transmission line between Armenia and Iran will be agreed upon so that its construction can begin in late 2015 in order to be completed in 2018. Other issues to be discussed also include developing trade, expanding economic relations and extending communication links, Armenian energy officials told journalists in mid-August.

There are currently two 220 kW transmission lines that each run from Iran to Armenia, and Iran's Export Bank will allocate $93 million to the development of greater cross-border transmission, the bank's executive director, Ali Saleh Abadi, told Azerbaijan's Vest Az agency on Wednesday. Bahman Salehi, head of the Iranian Water and Power Company, said the first batch of equipment for new power lines will be delivered to Armenia, Armenia's Arka news agency reported on Aug 28. The 400 kW transmission line, to cost $160 million, is intended to increase the ability to meet the electricity needs of the two countries.

According to Armenian Energy Minister Yervand Zakharyan, Armenia will link up with the Georgian electrical grid through the Georgian border station at Aryum. This has been financed by loan agreements with European donors in a project to build a 500 kW transmission line and substations that will allow Armenia to serve as a hub for electricity transit between Georgia, Armenia and Iran.

The second tier of Iranian-Armenian cooperation would allow Armenia to serve as a route for Iran in its partnership with the Eurasian Economic Union (EEU). The EEU was formed in January 2015 by Russia, Belarus, Kazakhstan and Armenia, while Kyrgyzstan also joined in May 2015. Among the five members of the EEU, Armenia has a 44 kilometer direct land link with Iran while Kazakhstan and Iran border the Caspian Sea. EEC Trade Minister Andrey Slepnev told journalists Wednesday that the EEC is expected to start a joint study with Iran this fall regarding the prospects of establishing a free trade zone (FTZ). Slepnev also recently discussed the prospect of such a move with Armenian business circles.

Commentators in Armenia anticipate strategic openings that their contiguous borders with Iran may bring for them in the coming years. Gagik Sargsyan wrote in a Caucasian Institute report in April that as a landlocked country, Armenia pins hopes on the prospects of having a new rail link connecting to Iran, which will put Armenia along the route connecting the Persian Gulf and countries in Central Asia and the Middle East as well as India and China. Armenia has road connections with Iran that serve as an important link to enable Georgia's economic cooperation with Iran.

Armenian Chamber of Commerce and Industry Chairman Arsen Ghazaryan emphasized that it is in the interest of both Iran and Armenia to seriously consider the development of the north-south corridor, which foresees the establishment of a rail link between the two countries, and the north-south highway connecting Iran with Armenia and Georgia, according to Sputnik news agency quoting Sputnik Armenia on Aug. 5.

Armenia also seeks to diversify its energy sources in order to secure energy supplies. As option one, the arrangement includes the Russian gas pipeline linking Armenia through Georgia, while the second option is the Iran-Armenia pipeline. Armenian President Serzh Sargsyan was in Moscow on Monday to secure Russian gas supplies for the winter on a discount, RIA Novosti agency reported. In recent years, Iran has been swapping gas in exchange for electricity supplies from Armenia. The two countries intend to expand their gas-for-electricity exchange program over the next three-to-five years.

Iran is also trying to revive its hydro power generation plant project with Armenia to provide increased energy resources as Iranian industries gradually increase their activities. In this context, another project in the pipeline is the Megrhi Hydro-electric Power Station on the Araks River between Iran and Armenia. The construction of the 130 MW-capacity Megrhi power plant is estimated to cost $350 million, which will be provided by Iran's Export Development Bank in exchange for a supply of 800 million kilowatt hours (kWh) of electricity per year for 15 years, Vest Az agency reported on Sept. 2.

At present, Iran exports electricity to six countries. It has contiguous borders with Turkey, Armenia, Azerbaijan, Pakistan, Afghanistan and Iraq. At the same time, it also imports electricity from Turkmenistan and Armenia, Tehran Times reported Aug. 13.

According to Deputy Iranian Energy Minister Houshang Falahatian, Iran's, Iran aims to triple its annual electricity exports from the current 8 billion kWh to 25 billion kWh in the next three years. Iran expects that, once it receives the increased capacity transmission lines from Armenia, they can also potentially be connected in the coming years to the electricity grid with Georgia and even Russia.
Last Update: Sep 09, 2015 1:23 am
RELATED TOPICS