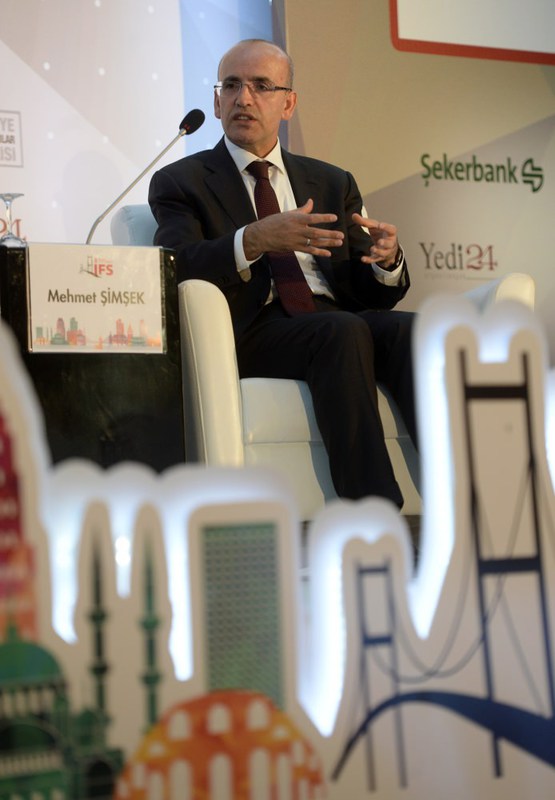 Finance Minister Şimşek said that while preliminary data projects 3 percent growth for 2015 and he is optimistic in the long run, but the country's economic outlook is overshadowed by recent political uncertainty

Finance Minister Mehmet Şimşek said Turkey's economic outlook is overshadowed by political uncertainty, but is optimistic in the long run. Delivering an opening speech Wednesday on the second day of the Istanbul Finance Summit (IFS), whose main theme is "Proceeding in the Environment of Low Growth and Low Interest Rates," Şimşek suggested investors should take a long-term look at Turkey. "The powerful stance of public finance increases Turkey's strength against shocks. However, political uncertainty might undermine it. The most important risk that we are facing is longtime political instability," he said.

Speaking about Turkey's agenda, Şimşek said the reconciliation process was a very important step, but it was exploited. He also expressed his belief that Turkey will succeed in its fight against terrorism and that separatism will never work in Turkey.

Şimşek also touched on economic growth, saying: "Preliminary data in the first nine months of the year reveals Turkey will grow by around 3 percent in 2015." According to Şimşek, the rapid growth period for developing countries has ended for at least the near future. Not only Turkey, but also all developing countries need additional structural reforms, but this is prevented by political vagueness, and that the decline in commodity prices and the rise of the dollar and geopolitical tensions create trouble for developing countries. He said that the only way to reduce these troubles is to hold on to reforms and Turkey needs political stability, a strong government and the re-initiation of reforms.

According to Şimşek, Turkey's fiscal policy could be eased to some extent if it were not facing current account deficits and inflation problems. Strong fiscal policy means a strong central bank, he said. Pointing to the U.S. Federal Reserves (Fed) possible interest rate hike, Şimşek said that monetary policy will turn to normal sooner or later and the Fed might take steps towards an interest rate increase soon, as revealed by rumors circulating in markets. If Turkey faces a decline in capital flow because of this, it will adversely affect growth, he said.

In reference to privatization, Şimşek said demand is as important as supply in privatization and Turkey will not have difficulty achieving targets. He said the country can easily achieve TL 10 billion ($3.3 billion) next year. Şimşek also said that the ministry will update the Medium Term Program and the budget will be prepared and offered to Parliament before Oct. 17. In addition Şimşek suggested that Parliament should enact a temporary budget law in December.

Touching on the unpredictability of exchange rates, Şimşek said the key factor that determines exchange rates is political uncertainty. It is a risk for electricity distribution companies, which has liabilities on the dollar basis, to sell electricity in Turkish lira, and he invited the Energy Market Regulatory Authority (EPDK) and Energy Ministry to make regulations for a well-functioning system.
RELATED TOPICS