Shiller: 2008 crisis was a mixture of innovation, bad practice 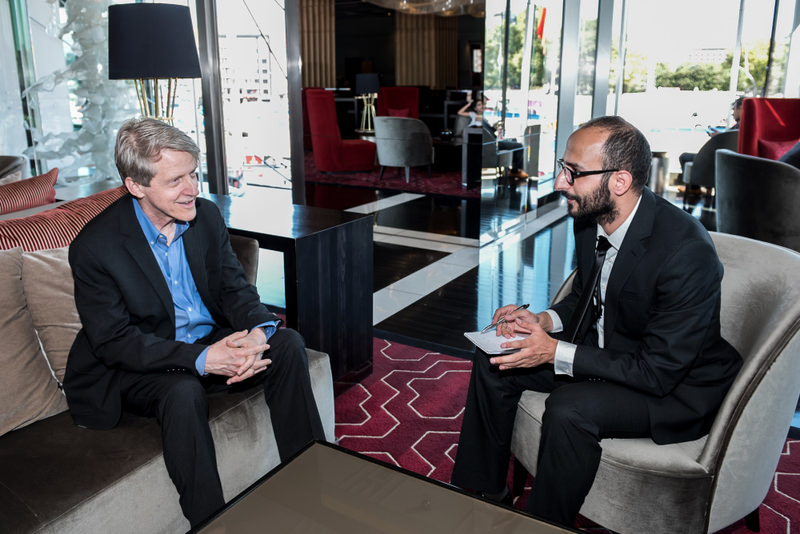 In the G20 Global Islamic Finance Conference the integrity and decency of the sector was discussed along with its future. Attending the conference, Nobel laureate economist Robert J. Shiller spoke to Daily Sabah regarding moral issues in finance

In an exclusive interview with Yale University economist Robert J. Shiller, Daily Sabah's Cafer Deniz spoke with the Nobel laureate about finance and its moral issues at the G20 Global Islamic Finance Conference "Benefits and Opportunities" held in Istanbul as part of a series of G20 events held by the presidency and the Central Bank of the Republic of Turkey (CBRT).

Robert Shiller: I think of finance as a technology, a way of getting things done. Finance is about achieving goals and the technology allows people to form organizations, of people to do things, to incentivize people, to manage their risks and to discover information – all of those things that help people achieve their goals. The technology is neutral but it is the question of goals that people have. The goals can be selfish and antisocial or they can be humane and considerate of society and the environment. So, I think it is people that make for good finance. You can use financial technology to manipulate and deceive people. but that's not good finance. So, it takes some integrity and it takes some institutions that help make good finance. Business institutions like chambers of commerce or better business bureaus or government institutions that regulate, that's would makes good finance. I'm thinking you had this other book that I'm writing with George Akerlof. The problem is that under capitalism, if it is possible to deceive and manipulate people, there is a financial reward for doing so unless there is some institution built to prevent it. So, I'm glad to think that the discussion I'm hearing here about Islamic finance is really about a process, one that is similar to processes I've seen in the U.S. about ethics, morality and finance. It's very important for business people to get together, talk about those things and decide on a course of action that will prevent them. Because if you don't have the community feeling that supports good finance, it may be impossible to be good in your financial dealings and survive.

DS: What about your latest book with George Akerlof, "Phishing for Phools: The Economics of Manipulation and Deception." How do markets both harm and help us?

RS: So, I've already alluded to that book. Humans can be very manipulative and deceitful. It's part of the human experience. The problem is that in modern society, people and organizations develop expertise and winning in the game of competitions. And part of that expertise is expertise in playing tricks on people. So, in finance it sometimes happens that an investment company, which is selling services, spends more money on marketing than research. And if that's happening, they are not serving the public good. It sometimes happens that financial advisors tailor their advice to what they perceive the clients wants to hear. If the client is very risk averse, they will advise about risk adverse investments. If the clients seem to be to be of a gambling spirit, they'll propose that kind of investment. To some extent, that might be the moral thing to do. But to another extent, maybe they should carve out people in there and move them toward a saner investing regiment. But there's an incentive in the free market economy to just say what sounds plausible to the client. So, it seems like in the long-run, it probably works out to investment advisors who are moral or investment managers who are moral but do better. The long-run takes a long time to happen, I think. It is better if we have moral principles embodied in our institutions and our government regulations.

RS: The thing is with business people, I have to think what they're doing is "bonafide." In Latin "bona" means good, "fides" means faith. The idea was that as a business person, you should not be trying to take unfair advantage of others. When you make a deal with someone, you don't have to necessarily worry too much about that person but you don't do it if it is really going to be at that person's expense and he doesn't know it. In that case, you suggest another deal; that's bonafides, good faith. That occurs naturally because most people have a sense of integrity. But sometimes certain core understandings go remiss and there is no institutions to prevent it. The people of lesser scruples will dominate. That's a fundamental problem with free market capitalism. So, we really don't have free market capitalism, we have capitalism with a moral side. Businesspeople generally have moral qualms; I say give them credit for that, and they form associations. I mean, that was one reason why I was attracted to this conference on Islamic finance. I grew up Christian, but it seems to me that they are wrestling issues that are very important. For the G20 meetings, Prime Minister [Ahmet] Davutoğlu listed the three "I"s, which were implementation, investment and inclusion. The last one reflects a moral basis of fairness to all people. Inclusion means everyone is part of this. We don't view it as we're the insiders, we businessman are the insiders and we don't care about anyone else. That's what inclusion means; that's a moral side of finance.

DS: You stressed during the G20 conference that the finance industry needs more financial innovation, whereas some other economists said these innovations were the reasons for the recent global financial crisis. So, how should we treat the innovation in finance?

There were some innovations that played their role in the financial crisis. One innovation that is most criticized is the mortgage securitization of subprime mortgages that involve rating agencies giving exaggerating high ratings to bonds that were very risky. And the innovation was to develop a very complex financial product that nobody but a professional rater could understand and evaluate. And then the professional raters often fell down on a job and weren't paying attention. So, there was a kind of fraud committed. It was not maybe technically fraud, but it was at the expense of many investors. But there was a mixture of innovation and bad practice. The innovation actually made some sense; the idea was of pooling mortgages and the mortgage securities and building on top of that, securities that divided up the mortgages and tranches so you can divide the same pool of mortgages into a different risk tranche. That's actually I think a useful technology. It was abused before the financial crisis. So, technology has both good and bad sides; it can create opportunities for abuse. But I know you would blame the technology, these things happen in a society that's advancing. I don't think we should take the idea that financial innovation is a bad thing just because we've had some bad outcomes.

DS: How did your academic and daily life change after winning the Nobel Prize in 2013?

Well, I'm working harder than ever. Some people tell me, "Look, you should relax now; you already won, you got the Nobel Prize, so now relax already." But I haven't been, it has been absolutely hectic. I suppose I should. Notably because I became president-elect of the American Economic Association, which is like a new job on top of my old job. I just get so many emails. I got more help; I have a full time assistant and more. So many people email me there is no guarantee that I'll ever see it because I cannot handle them anymore. But it's been an overall pleasure, it creates a social life that is very enduring. I meet people all over the world. I get to talk about important issues with them about the problems facing their nations. I think being a Nobel Prize winner in economics has a special advantage. I deeply admire the chemists and physicists and medical researchers, but what they do is much more abstract and technical. I don't think they can talk this easily about it to a public audience.
RELATED TOPICS