Economy minister: ‘Our goal is full integration with the EU' 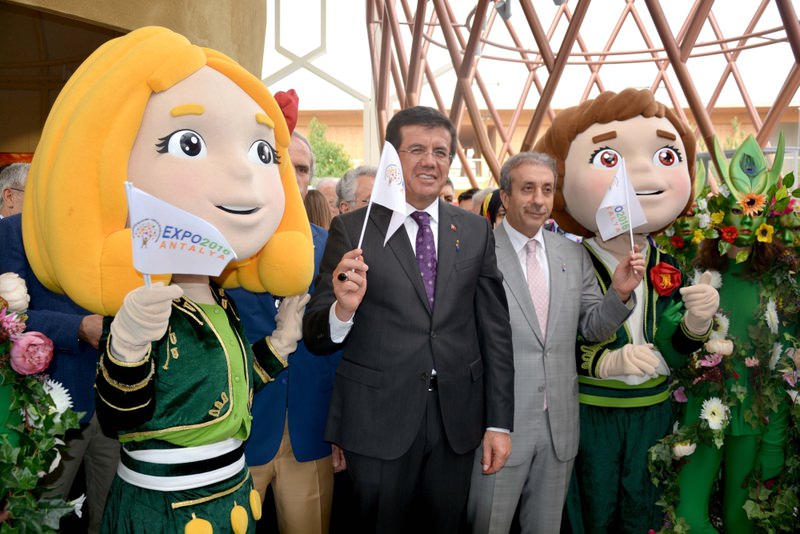 Holding flags of EXPO Antalya 2016 which will be held in Turkey, Minister Zeybekci (C-L) visited Turkey's pavilion in EXPO Milan along with former Food and Agriculture Minister Mehdi Eker (C-R).
by Daily Sabah with AA Sep 16, 2015 12:00 am

Interim Economy Minister Nihat Zeybekci said the foreign trade volume of $20 billion between Turkey and Italy is not acceptable, considering the geopolitical opportunities that the Mediterranean Basin offers to both countries.

Speaking at the Turkey-Italy Business Forum that was held as a part of the National Day of Turkey at Expo Milano 2015, Zeybekci suggested that Turkey and Italy should open their doors more widely to each other's investors. The minister criticized the restrictions that Italy places on Turkish goods that are exported through the country, saying that Italy should remove such obstacles and enable Turkey to open up to Europe and the world. Zeybekci also underscored that Turkey is the only country that has a customs union agreement with the EU, which allows the free circulation of Turkish goods in Europe.

Pointing to dramatic changes that the world is going through, Zeybekci said new global economic blocs are forming and Turkey will be one of the countries that shape these blocs. He said Turkey and Italy should boost economic relations even before Turkey achieves full integration with the EU, adding that the two countries should join hands and be a propulsive force for each other in trade, industrialization and global economic cooperation.

The minister called on Italian businesspeople to conduct joint business in Central Asia, the Caucasus, the Middle East, Africa and the Balkans with Turkish businesspeople, and said there are no obstacles preventing the development of cooperation between the two countries.

According to Zeybekci, around 5 million jobs were lost in all EU countries between the 2008 financial crisis and the end of 2014; however, Turkey increased employment by 6 million during this period, which made the country rank first in terms of increasing jobs in the world. Over the past 13 years, Turkey has increased its per capita income and made significant progress in a number of areas, such as foreign trade, agriculture and tourism, becoming the world's 17th and Europe's seventh-largest economy, Zeybekci said, stressing: "Turkey has managed to grow by 4.7 percent on average for 13 years in a row."

Zeybekci further emphasized that Turkey ranked seventh among the world's fastest-growing counties in the second quarter of the year. Referring to the significance of Turkey's membership in the EU, Zeybekci said Turkey does not only aim to be a full member of the EU, but to enact European standards in law, democracy and freedoms. "Our target is clear: Our goal is full integration with the EU," Zeybekci said.

Italy's Deputy Economy Minister Carlo Calenda said Turkey and Italy have deep and ever-improving relations, adding that foreign trade relations are developing in a balanced way. According to Calenda, Turkish companies have recently conducted business in the textile, food and tourism industries in Italy. The two countries can also cooperate with developing countries, he said.