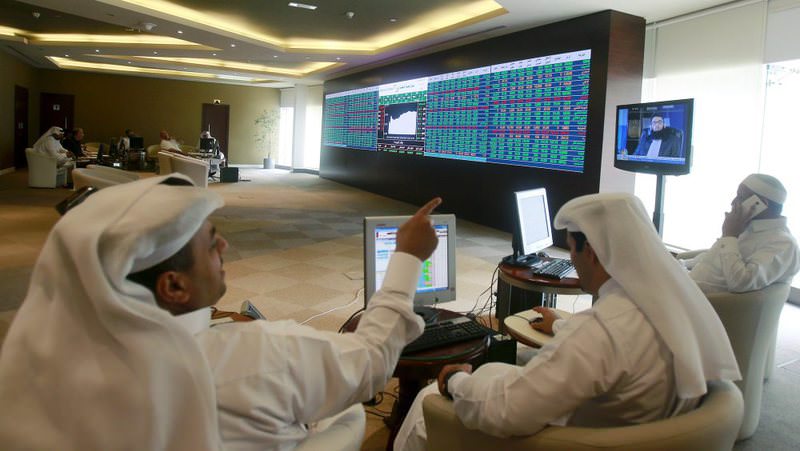 Traders watch an electronic share price display at the Doha Stock Exchange in downtown Doha.
by Daily Sabah Sep 16, 2015 12:00 am

As the Islamic finance industry marks a key milestone, a lineup of global powerhouses will meet for the 22nd World Islamic Banking Conference to take stock of Islamic finance's achievements and shortcomings

The World Islamic Banking Conference (WIBC), considered by many as the Islamic financial services industry's compass for over two decades, continues to live up to its reputation after officially announcing that its 22nd annual edition which will take place from Dec. 1 to Dec. 3 in Manama, Bahrain, will provide industry leaders with a unique opportunity to critically assess Islamic finance's 40-year history. This coming December, regulators, CEOs, scholars and other leaders from the Middle East, East Asia, Africa and Europe will assess and reflect on the achievements, challenges and opportunities in the rapidly growing Islamic finance industry, which currently amounts to $2 trillion. While it cannot be denied that Islamic finance has grown tremendously in the past 40 years from a very small base, there is a growing belief that the industry's progress should not be assessed purely on asset growth. As such, the industry is being called to address several questions such as if there should be a shift away from asset and profit growth toward other variables such as Islamic authenticity and social and economic value, how Islamic finance can advance a truly profit and loss sharing system in parallel with complying with global prudential standards, e.g., Basel III, how the industry can develop a new regulatory architecture to support small- and medium-sized enterprises (SMEs) as well as asset-backed financing in order to complement asset-based structures and public infrastructure investment financing.

The momentum for historic discussions on these matters is building up to December's WIBC, which will include a much anticipated power debate between some of the industry's preeminent leaders. They will address the core question of how the current system can converge with its original proposition. Datuk Professor Rifaat Ahmed Abdel Karim, CEO of International Islamic Liquidity Management Corporation (IILM); Noor Abid, board member of Kuwait Finance House Group, and Tirad al-Mahmoud, CEO of Abu Dhabi Islamic Bank (ADIB), are only a few of the pioneers who will address the landmark gathering of more than 1,500 attendees.

Regarding the question of convergence, Abid, a leading advisor to the Islamic finance industry for over two decades, said: "Islamic financial institutions [IFIs] need to structure their business models in such a way that the socioeconomic objectives go hand in hand with commercial and profitability goals." Acknowledging the WIBC as the definitive platform for shaping industry dialogue, he further explained: "There are now conclusive studies suggesting that doing good to the society you serve has the potential to generate positive long-term economic performance. It is time that IFIs calibrate their objectives and performance measures such that they are able to serve their communities in a positive manner while aiming for high-quality returns."

He suggested the next steps: "One way forward for the development of Islamic finance based on its true principles would be to adopt some of the leading practices from the impact investment communities and incorporate integrated reported initiatives."

International standard-setting organizations such as the Accounting and Auditing Organization for IFIs (AAOIFI) and the Islamic Financial Services Board (IFSB) have been formative in helping the industry develop a more integrated approach, coupling profitability and values.

However, while the relevant standard setters may issue appropriate frameworks or standards, it is essential to secure joint commitment from all stakeholders within the system. This is partly because of the challenges of adopting both international and industry standards. There is growing concern about a disconnect between what is required by international prudential standards and the principles of Islamic finance. For instance, IFIs have an affinity for investment management as well as credit provision to underserved segments, e.g., micro-, small- and medium-sized enterprises (MSMEs). Financing MSMEs and the risk charges imposed on profit- and loss-sharing assets by Basel III regulations mean that Islamic banks, while benefiting from greater prudential stability, will drift further away from credit provision to the real sector.

The WIBC 2015 is set to gather all the key stakeholders - governments, regulatory bodies, central banks, leading Islamic banks, IFIs and multilateral bodies - to better understand how to wed standards to ensure global compliance with adherence to core values.

Making the case for tapping into this market segment, he said: "Given that the global Muslim population represents at least a quarter of the global population and sharia-compliant assets of $2 trillion represents only a small fraction of the total global financial assets, there is tremendous opportunity for Islamic banks to target this population thereby increasing financial inclusion." In Tirad's view, the way to increase financial inclusion is for Islamic banks to expand their "reach outside major urban centers by investing in microfinance initiatives and through alliances with the relevant governmental institutions."

Resolutions of the critical matters that the Islamic finance industry faces will be moderated by Dr. Sayd Farook, the vice chairman and CEO of Middle East Global Advisors, the conveners of the WIBC throughout its 22-year history. As such, it is perfectly apt that this year's WIBC, focusing on the industry's assessment on its 40th anniversary, will take place with the theme: "New Realities, New Opportunities."
RELATED TOPICS