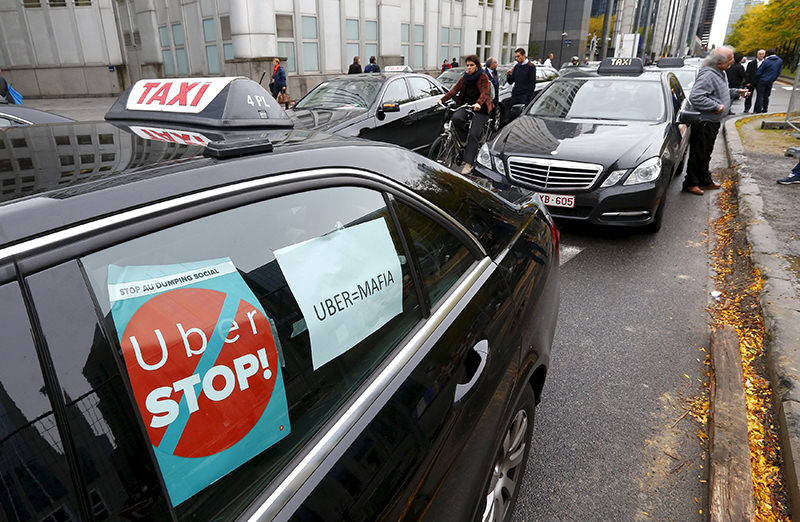 Taxi drivers from all over Europe line a street during a protest against online ride-sharing company Uber, in central Brussels, Belgium, September 16, 2015. (Reuters Photo)
by Şeyma Eraz Sep 16, 2015 12:00 am
Taxi drivers went on strike Wednesday in Brussels to protest the private-car booking enterprise Uber. Drivers burned car tires on a crossroad near Midi next to the Lemonnier metro station, and Zuidlaan and Avenue de Porte de Hal streets were also closed by furious taxi drivers, who claimed Uber costs their business a significant loss of revenue.

Uber is a mobile app that allows consumers with smartphones to submit their trip request and see the other Uber drivers, who use independent cars, on the same road. They share the costs of traveling instead of using their own car or hiring a cab. As of May 2015, the app has been used in 58 countries.

However, as it were in many other protests throughout Europe and North America, taxi drivers in Brussels were not happy about losing revenue because of the decrease in number of customers.

Taxi operators expected about 1,000 vehicles from Belgium and other EU countries to take part in the protest, which is to pass through the Belgian capital and finish in the city's European quarter, where the commission and other EU institutions are based.