European dream washes ashore with a flood of refugees 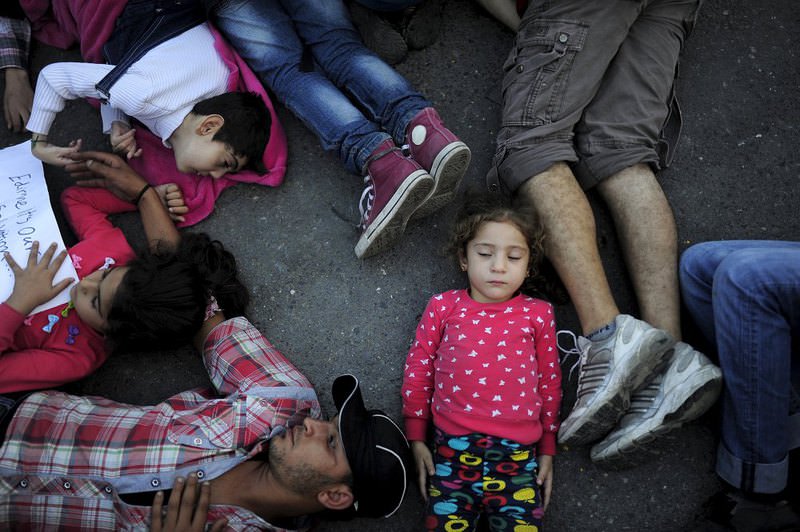 Migrants lie in protest, paying tribute to Aylan Kurdi, the drowned Syrian child whose body washed up on a beach in Turkey, as they are stopped by security forces at a bus station in Istanbul.
by Daily Sabah with AFP Sep 21, 2015 12:00 am

A flood of refugees which was symbolized by Aylan Kurdi who washed ashore in pursuit of a decent life in Europe and the war in Ukraine, tears the continent apart instead of bringing it together

The EU's founding father Jean Monnet wrote in his memoirs that "Europe will be forged in crises." So, from a flood of refugees which is symbolized with Aylan Kurdi who washed ashore in pursuit of decent life in Europe to the near-collapse of the euro and the war in Ukraine, the continent's divided leaders have struggled to deal with wave-after-wave of problems that strike at the heart of the European dream. If they fail to bridge their differences, officials and analysts warn that the principles forged in a bid to build a new Europe from the ashes of World War II are in jeopardy.

"This is now threatening the heart of Europe and the core of the European project," Guy Verhofstadt, the former Belgian prime minister of who now leads the Liberal group in the European Parliament, told Agence France-Presse (AFP). The refugee crisis is "deeper than the euro crisis. I think it's a real test - it's also an opportunity to make a jump forward," he added.

The perfect storm of crises has in recent months brought to the surface divisions that have long been papered over in pursuit of a union of 28 nations and 500 million people - together, the world's biggest economy. A deep rift between eastern and western EU states on migrants has been added to the split between north and south on the eurozone debt crisis. Instead of solidarity and humanity in dealing with thousands of migrants dying while trying to flee Syria, Afghanistan and Iraq, the world has been treated to the unedifying spectacle of EU leaders bickering over asylum quotas amounting to 0.032 percent of the continent's population. The result is that one of the EU's most cherished ideals - the Schengen passport-free area and a continent without borders - is now at risk as countries reintroduce border controls and build razor wire fences.

The migration crisis has come on top of a debt crisis in the eurozone that has left some of the southern European members economically devastated - piling misery on the same area that, incidentally, has received the most refugees. While debt-laden Greece was finally granted a huge bailout after months of bad-tempered negotiations, analysts say many of the single currency's underlying problems remain. Whichever government emerged from yesterday's Greek elections - whose results were due after the time of print - the country's colossal debt is viewed by many as unsustainable, while broader talks in Brussels on increasing banking union have largely stalled. Add the crisis in Ukraine that has plunged relations with Russia to their lowest point since the Cold War and the looming threat of a possible British exit from the EU in a referendum due by 2017, and the problems mount.

Monnet - the Frenchman who became the first head of the European Coal and Steel Community, the forerunner of the EU - believed that Europe would be the "sum of the solutions adopted for those crises," but solutions are exactly what leaders are failing to provide. Governments are increasingly paralyzed, with many of them looking over their shoulder at populist parties from both the right and left wings.

Together, the crises are increasing the likelihood of countries acting unilaterally to protect their borders or their economies from disruption - thereby undermining the whole point of the EU. "Crisis is piling up on crisis. The EU's integrity, if you look at Greece or Schengen, is under pressure," Janis Emmanouilidis of the European Policy Centre, a Brussels-based think tank, told AFP.

European Commission (EC) President Jean-Claude Juncker recently made an appeal for "more Europe," echoing calls across Brussels for greater integration to keep the bloc's core ideals in place. However, Raoul Ruparel, co-director of the London-based think tank Open Europe, said the "confluence of very serious existential crises" required urgent reform in Brussels. "Trying to force all these countries into one-size-fits-all has worsened the divisions. The eurozone showed that with Greece and Germany; now we are seeing that with the migration crisis between east and west [Europe]," he told AFP. "You have this combination of institutional flaws undermining the policy, and then pitting the member states against each other - that combination is toxic."

But the EU has not yet reached its "Titanic moment," Emmanouilidis said, highlighting that the past 60 years of integration on a once-warring continent had produced a "collective DNA." "It might be the end to some elements of the EU, but I don't think the EU itself is going to under," he said.
RELATED TOPICS