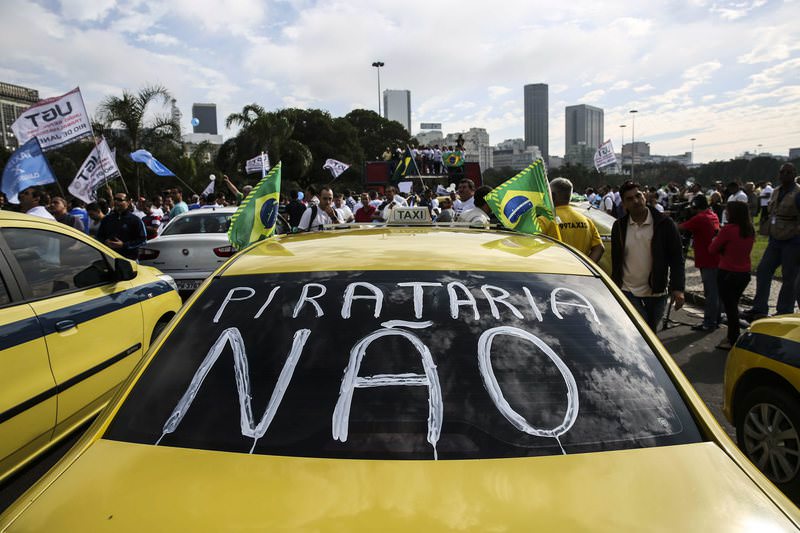 No piracy' written in Portuguese on the windscreen of a taxi as drivers protest against the Uber car service, in Rio de Janeiro, Brazil, 24 July 2015. (EPA Photo)
by Compiled from Wire Services Sep 30, 2015 12:00 am
The city that hosts next year's Olympic Games has become the first in Brazil to ban the use of smartphone-based ride-hailing-applications like Uber.

"Uber is forbidden," Paes said after signing the bill. "We are open to discuss the matter, but it is forbidden."

Uber drivers who ignore the ban can be slapped with fines of nearly $500.

"It is a sad day for Rio," Uber said in a statement. "To please taxi owners in the city, Mayor Paes sanctioned a completely unconstitutional bill to ban technology from the city, leaving cariocas (Rio residents) with less options to move around." It said it is studying possible legal actions.

Haddad told the Globo network he wanted to find "a middle path" to address the issue.

"We aren't thinking only about Uber. We are thinking of ways to include this new technology in our city's regulations," he said.

Uber has drawn increasing use since last year's World Cup of soccer, with many of its cars cleaner and newer than those of regular cabs.

"They are a multinational that pays no taxes. How can we compete with that?" said Rio cab driver Elizeu Soares, 54. "We have to go through inspections; they don't. We have to pay for special documentation; they don't. The only advantage we have is to pay a bit less when we buy new cars, but even that doesn't make up for all the costs. They can't just come to Brazil and throw us out of business."

Traffic expert Eduardo Biavati said that "although Uber isn't that big here yet, it can surely become big soon."

He said Haddad's proposed approach can be more effective.

"Mayor Paes sided with the cabbies, but that kind of legislation will soon become useless. Technology is faster than politics and this shouldn't be about Uber becoming taxis. It should be about taxis becoming Uber, with less regulations for all," he said.

Brasilia and Belo Horizonte are the only other two cities where Uber is present. To prevent its spread, city councils in at least 13 other state capitals have laws pending approval to ban the service.

Many other protests throughout Europe and North America have taken place to protest the internet-based car-hire service.

Previously, taxi drivers in Brussels went on strike September 16 to protest the private-car booking enterprise Uber. Drivers had burned car tires on a crossroad near Midi next to the Lemonnier metro station, and Zuidlaan and Avenue de Porte de Hal streets were also closed by furious taxi drivers, who claimed Uber costs their business a significant loss of revenue.

Paris traffic had also been brought to a standstill in June as taxi drivers parked their cars and took to the picket lines to protest Uber. Strikers had lit fires along the ring road and refused to provide service at the city's two main airports and train stations.

Later on, French President Francois Hollande also joined in the criticism of Uber, arguing that the company "respects no rule." "I understand that there are manifestations ... I can understand that there is exasperation," he said in Brussels, where he was attending a European Union summit.

Uber is a mobile app that allows consumers with smartphones to submit their trip request and see the other Uber drivers, who use independent cars, on the same road. They share the costs of traveling instead of using their own car or hiring a cab. As of May 2015, the app has been used in 58 countries.