Turkish defense industry aims to sign deals worth $5B in Qatar 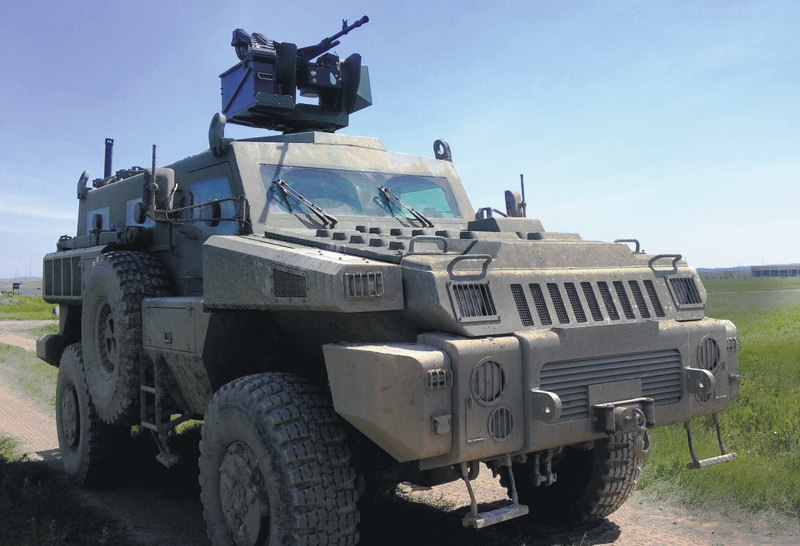 Turkish and Qatari experts aim to sign deals worth $5 billion during the High-Tech Port by MÜSİAD, a defense industry fair that will be held next week in Doha. Bilateral trade between two countries, which increased 50-fold within the last 10 years, is aimed to be increased an additional 200 times the next 50 years

Turkish defense industry expects to create business volume amounting to $5 billion in Qatar. High-Tech Port by MÜSİAD, a defense industry fair organized by the Independent Industrialists' and Businessmen's Association (MÜSİAD), will be organized with the aim to bring together Turkey's technology giants, project owners and investors from Oct. 6-8, 2015, for the second time in Doha, Qatar's capital. High-Tech Port by MÜSİAD, which will bring the biggest players in Turkey's and Qatar's defense industries, is the first fair jointly organized by the two countries.

A total of 67 companies from Turkey will join the fair, and the Turkish defense industry is expected to sign important deals at the end of the fair. MÜSİAD Chairman Nail Olpak stressed that High-Tech Port by MÜSİAD will be the beginning of new cooperation between the two countries for a better future. Moreover, this cooperation between advanced and strategic sectors in Turkey and Qatar will become a global power, and the countries will unite as historical partners.

Speaking at a press conference organized at Çırağan Palace in Istanbul, the chairman of the Permanent Committee of the Qatari Ministry of Foreign Affairs, Abdullah Fakhroo, stressed that they are expecting the commercial relations between Turkey and Qatar, which increased 50-fold within the last 10 years and are expected to increase by 200 times within the next 50 years.

Olpak also underscored that the High-Tech Port by MÜSİAD was an important forum organized within the 15th MÜSİAD International Fair in 2014, which demonstrated the achievements in the "Advanced" and "Strategic" sectors. "We realized that day that Turkey was at a point to establish strong business relations with ally countries in the production of high-technologies. With discussions we held with our President [Recep Tayyip Erdoğan], Prime Minister [Ahmet Davutoğlu] and related ministers, we decided to organize the second High-Tech Port by MÜSİAD in Qatar," Olpak added.

Fakhroo referred to Turkey as their second country and highlighted the importance of the fair. "We will be organizing a business forum to which major businessmen that have supported both Turkish and the Qatari industry will attend at the fair," Fakhroo announced.

The assistant chairman of the Industrial Committee of Qatar's National Armed Forces, Mohammed K. Al-Kuwari, also underlined that BMC, one of the leading Turkish companies in the sector, is crucial to the strategic partnership between Turkey and Qatar, while ICT Qatar's Assistant Undersecretariat Hassan Al Sayyedannounced that as the Qatari Ministry of Information and Communications Technology, they will be attending the fair with various subcontractors and public managers. He added that they are hoping to have more business deals with Turkish companies in Qatar.

"Turkey offers important incentives for Qatari investors, which enhances and empowers our trade relations, and we believe our mutual relations and investments will increase," said the assistant general manager of the Qatar Businessmen Association, Sarah Abdallah.

Yarar announced that they will be organizing the 19th International Business Forum with the participation of Turkish and Qatari businesspeople. "Together, we will show the world what Islamic cooperation can achieve," Yarar added.

Touching on the technical details of the fair, High-Tech Port by MÜSİAD General Coordinator Hakan Kurt said Turkey can escape the middle income trap and achieve its goals for 2023 through the production of value-added goods and development of high-technology.

According to Kurt, the Turkish defense industry - a sector that employs the highest technology in the country - made $25-$30 per kilogram of products it exported last year. The ATAK helicopter, TRJet - Turkey's first regional plane - and national satellite are exported for $10,000, $2,300 and $100,000 per kilogram, respectively, Kurt said, adding that these figures will be the cornerstones of the leap taken by the economy in the near future.

Underlining that the Turkish defense industry should create a development-oriented strategy, Kurt said Turkey's unmanned aerial vehicles, which are produced above world standards, challenge the products of countries such as Germany and Israel. The Turkish defense industry satisfies more than half of its needs on its own and has potential to export defense products to a number of countries in the world, Kurt added.

The fair will be organized under the auspices of Qatari Emir Sheikh Tamim bin Hamad bin Khalifa Al Thani and Erdoğan with the support of the Undersecretariat for Defense Industries and the Qatari Businessmen Association. A total of 67 Turkish companies, including BMC, ASELSAN, HAVELSAN, Turkish Aerospace Industries (TAI), ROKETSAN and Turkish Technic will participate in the fair that features firms from the defense, aerospace, marine systems, information technologies and engineering sectors. TRJet will make debut in the Middle East for the first time at the fair, and BMC will introduce seven very large defense vehicles.
RELATED TOPICS