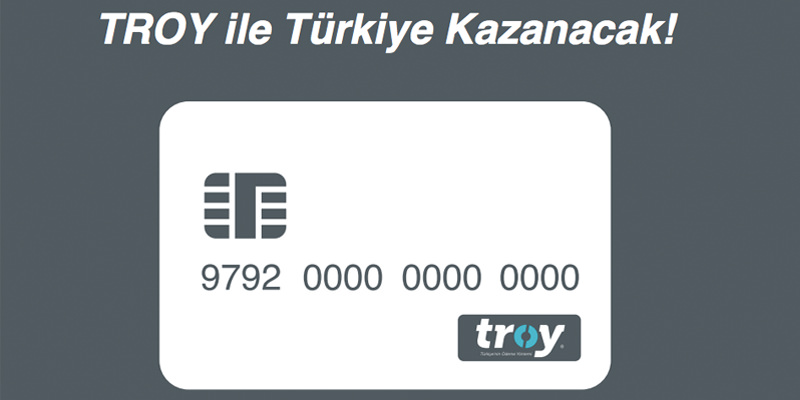 Electronic payment cards are processed by merchants and then sent to a clearing network that completes the payment. Visa and MasterCard were previously the companies of choice for this operation. But in April 2016, banks operating in Turkey will clear payments with the new national system. "We are pleased to have our own brand, which you will see at the bottom-right corner of every [debit or credit] card," Canko said. He said TROY would be a first for the country, adding that the three-year project constitutes "a historic moment."

"This payment system also is a product of 25 years of experience," Canko added, describing TROY as "a strategic step" for Turkey. However, he did not reveal how much the center invested in developing the payment system.

There are 164 million bank cards in total in the country, with 106 million of these being credit cards. Turks have spent a total of $400 billion via debit and credit cards to date. Canko said every Turk carries at least two cards in his or her wallet, yet most Turkish citizens prefer cash; paying via cards only constitutes 40 percent of all transactions.

Canko said TROY would appeal to those who still choose cash because the fee of using the card will be lower than that charged by the international card networks. In this way, the system will lead to more savings and greater innovation, he stressed.

The system will be managed by the BKM card center, but banks will be able to choose the national system or another. He also ruled out any rivalry with the international clearing networks Visa and MasterCard.

Developed countries, including Germany, France and Italy, had already launched national payment systems as well, according to Canko. States with similar economies to Turkey, such as Brazil, Russia, India, China and South Africa - the BRICS nations - have been considering introducing such payment systems.

Canko said the center had received substantial support from the Central Bank of the Republic of Turkey (CBRT), the Banking Regulation and Supervision Agency (BDDK), and all banks during the development phase of the payment system.

The Interbank Card Center was established with the partnership of 13 public and private Turkish banks in 1990. BKM aims to provide solutions to the common challenges faced by banks and develop rules and standards for credit and debit cards.
RELATED TOPICS