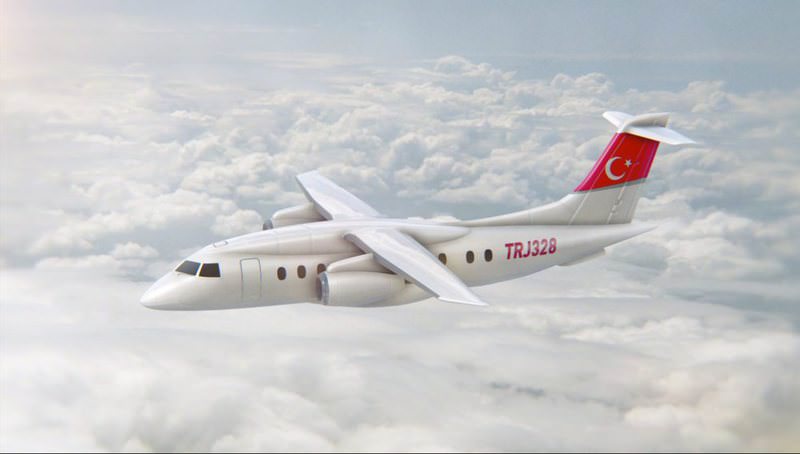 by daily sabah Oct 01, 2015 12:00 am
Turkey's first regional jet, TRJ328, which is being developed as part of the TRJet program, is set to perform its first flight in 2019, and construction work on a TRJet facility will start in Ankara during the next phase.

Underlining that the jet to be produced is expected to change the face of air transportation in Turkey, Özmen said TRJET is essentially a transfer of mastery, expertise and education. TRJET offers a solid foundation in the fields of technology and innovation on which Turkish people will be able to establish new studies for posterity, he said, adding that the final approval process for the historic project still continues.

Özmen, who was chosen as one of the 10 most influential Turks in the U.S. by TurkofAmerica magazine, said the TRJet facility to be established in Ankara will produce the TRJ328 using a modernized version of Dornier 328 aircrafts within a few years and it will perform its first flight in 2019. "Turkey aims to benefit from its existing aviation resources in the best way possible to complete the jet before the scheduled flight time," he added.

The TRJ328 is considered a major step toward the production of the TRJ628, the first domestically designed passenger plane in Turkey. It is expected that the supply of parts for the production of the TRJ628, which will be designed and produced by Turkish engineers, will lead to a significant surge in the number of suppliers in this field in Turkey. The TR628 is slated to perform its first flight in 2023 in honor of the centenary of the establishment of the Republic of Turkey.

The project will fill a great gap in Turkey's aviation market as it will offer frequent and direct flights between small cities where large planes cannot operate practically. The aim is that the TRJet plant will support growth in Turkey's civil aviation sector and pave the way for the country to open up to the global aviation market as an aircraft original equipment manufacturer.

As well as opening a new horizon for the Turkish civil aviation sector, TRJet offers an investment opportunity for the country's new engineers and the sector's leaders. The project is expected to offer new and indirect employment opportunities in the fields of aircraft engineering and manufacturing.

SNC chairwoman Eren Özmen said the human capital is the most important capital that Turkey has and Turkey is lucky to have intelligent and ambitious young people educated at high-quality universities. "We aim to form a future that will bring this potential to the highest level, create highly affective global business opportunities and offer more opportunities for Turkey and the next generation," she added.
RELATED TOPICS