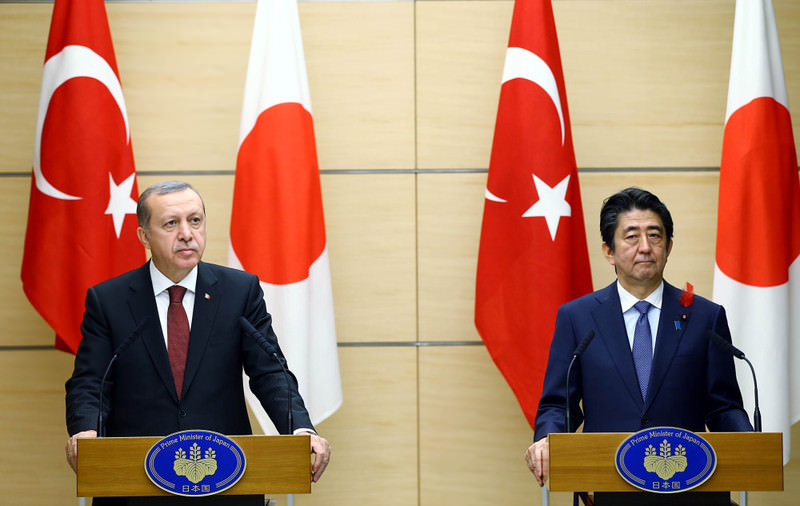 On Thursday, Erdoğan first attended a business conference where he stressed the importance of economic and financial relations with Japan, talking about mega projects in Turkey. He then he met Japanase PM Abe, reemphasizing diplomatic and economic relations

Thursday evening, President Recep Tayyip Erdoğan met with Japanese Prime Minister Shinzo Abe at the Japanese prime ministry headquarters. Delivering a speech at the meeting, Erdoğan extended his thanks for the hospitality shown to him and his entourage and offered his condolences to those who lost their lives during Typhoon Etau. Referring to the 90th anniversary of the establishment of diplomatic relations between Turkey and Japan in 2014, Erdoğan said, "As Turkey, we regard Japan as an important partner as a part of our regional and global vision." He stated that this year is the 125th anniversary of the Ertuğrul Frigate accident and the 30th anniversary of Turkish Airlines' evacuation of Japanese nationals from Tehran. Erdoğan also said he would be happy to attend the premier of the movie "Ertuğrul 1890" in Istanbul on Nov. 13, 2015 during Abe's visit to Turkey, adding, "The commemorative events that have been held both in Turkey and Japan, particularly our TCG Gediz Frigate's voyage in May-June last year, have become activities that enable us to hand our friendly relations down to future generations." Erdoğan extended thanks to Japan for its support for the actualization of such commemorative events.

Moreover, in the morning of the same day, President Recep Tayyip Erdoğan spoke to businesspeople at a seminar organized by the presidency's Investment Support and Promotion Agency during his visit to Tokyo, Japan. Underlining that Turkey is a safe zone for all investors, including Japanese investors looking to initiate new projects, Erdoğan cited the Marmaray Project as an example of mutually beneficial projects undertaken with development loans with easy terms. He also highlighted Turkey's mega projects such as light rail and metro systems as well as renewable energy projects.

Stressing projects such as the Çanakkale Strait Bridge, which will become the longest suspension bridge in the world, the three-story Eurasia Tunnel to be built in Istanbul and the Ankara-Istanbul high-speed rail line, Erdoğan said Turkish and Japanese companies can cooperate on similar infrastructure projects. Erdoğan also notified the businessmen of various hospital projects that are part of the City Hospitals Project, where hospitals will be built in 30 cities. A total of 17 of these have already been completed, while construction on the others continues.

Erdoğan emphasized new research and development projects in nuclear energy, space technologies, advanced communication and the defense industry, and added that he believes very productive projects can be realized together with Japanese partners.

Describing Turkey as a safe harbor for Japanese investors, Erdoğan said Turkey being in the middle of Europe, Asia and Africa facilitates economic cooperation in the region. He also underlined that as Turkey has been in the EU Customs Union since 1996, it is integrated with European economies. He added that Turkey's G20 membership and its current presidency of the G20 is an example of the responsibility it has assumed in the management of global economy. "The G20 summit will be organized in Antalya and the themes this year are implementation, investments and comprehensiveness. We are looking at a $70 trillion process until 2030 in terms of infrastructure investments," Erdoğan said. Regarding how such investments will be financed he said collaboration between public and private institutions is required, as the private sector should pave the way for the public sector. Erdoğan also added that he believes strong infrastructure will be formed in this manner and these projects will rapidly develop.

Mentioning the crucial targets set for the 100th anniversary of the Republic of Turkey in 2023, Erdoğan said they are aiming to turn Turkey into a country in which the national income per capita is $25,000, the total national income is $2 trillion, exports are around $500 million, with various seaports and airports and three nuclear power plants.

He further pointed to the plans that are currently being implemented to establish large logistics centers, high-capacity ports and to support these ports by train lines and highways. Erdoğan said the government would like to include Japan in this vision and desires to implement these targets together with Japanese investors. "I kindly ask you to support this sincere wish. You are valuable businessmen who would benefit from advanced political and legal infrastructure. We assure you that we will assist you in order to improve mutual economic and commercial relations," Erdoğan added.

Underscoring his belief that his visit will result in new business connections and improve the economic relations between Turkey and Japan, Erdoğan said the comments received from Japanese investors visiting Turkey are mostly about the lack of golf courses and Japanese restaurants. "I would like to note that we have the facilities and the ability to meet these requests of our fellow Japanese businessmen," Erdoğan said, and added that he does not want the recent terrorist attacks in a certain region of Turkey to give a bad impression in terms of safety in Turkey. He underlined that Turkey is set to take the right steps to fight terrorism and the problem will hopefully be resolved in the near future.

Erdoğan concluded his speech by wishing that the seminar will result in successful and productive partnerships between Turkish and Japanese businesspeople.
RELATED TOPICS