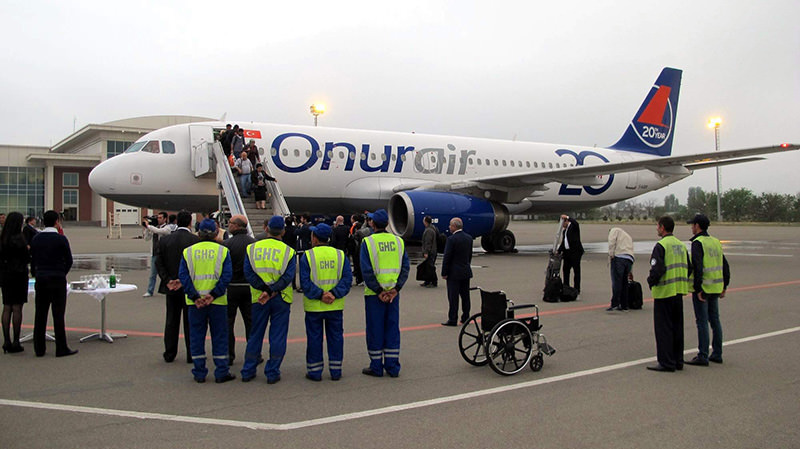 by Daily Sabah with Agencies Oct 22, 2015 12:00 am
Iran's Ministry of Oil has filed a lawsuit to acquire all the shares of Turkey's private airline company Onur Air claiming that the airline is in fact owned by the trustees of Babek Zanjani, who is currently in jail pending the verdict in a death sentence trial in Iran over the accusation of a $2.8 billion-worth fraud against the government.

According to an article in Turkish daily Hürriyet, Zanjani had earlier transferred his shares in the airline company for his debts to the Iranian government. Claiming that the Dubai-based British-Iranian businessman Mahdi Shams and Turkish businessman Kudret Tuncel who acquired the airline company in 2013 for $250 million are in fact Zanjani's trustees, Iran filed lawsuits in Turkey, making it the first of its kind against a Turkish company.

When Onur Air was sold by Cankut Bagana in 2013, it was claimed that the actual buyer of the airline was bought by Zanjani's Qeshm Airlines, which was denied by both parties of the sales.

As the Turkish Commercial Code foresees that the majority of shares should be owned by a Turkish citizen, the Iranian party claims that Shams and Tuncel signed a trusteeship agreement in 2012, and later acquired the Ten Tour company, which previously owned 92.8 percent of Onur Air's shares, with 49 and 51 percent shares, respectively.

The lawsuit petition claims that the multi-million dollar shares owned by Tuncel, which in fact belong to Zanjani, were transferred to the current owner, Cankut Bagana, free of charge with a contract on January 9, 2015. This transfer was allegedly made without the consent of Shams on the grounds that Bagana had dues from the company. A board decision on April 2015 reversed the earlier board decision and allowed the sale of transfer or the sale of Bagana's shares without Shams' consent, however, a Turkish court suspended the board decision in September until the termination of Iran's lawsuit.

The petition also claimed that Shams and Tuncel transferred all their shares to Zanjani under the supervision of Iran's Ministry of Oil and the 518th notary office in Tehran, and these shares were transferred to the Ministry by Zanjani himself over his debts.

Onur Air officials refrained from responding to the allegations on this issue.

The article stated that in the Zanjani trial in Iran, the prosecutor had earlier asked for the confiscation of $235 million worth of Onur Air shares owned by a businessman referred to as M.SH.

Onur Air is currently the oldest private airline operating in Turkey and the third largest airline in terms of fleet size. The airline was affected from sanctions against Iran due to Shams' shareholder status, raising questions on safety as spare parts sales were minimal and limiting its expansion when the Turkish aviation sector was booming as new plane acquisitions were not permitted.
Last Update: Oct 23, 2015 2:20 pm
RELATED TOPICS