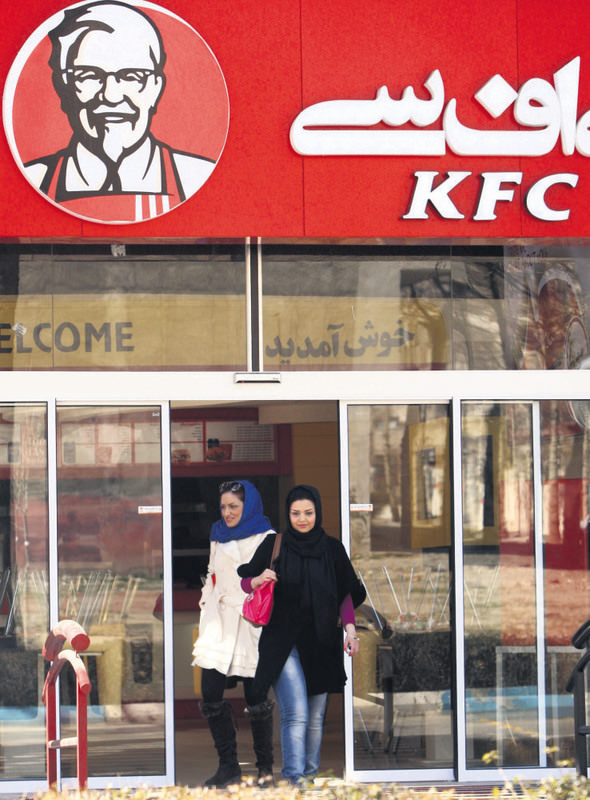 by Daily Sabah with Wires Oct 27, 2015 12:00 am
After the nuclear deal, Iran is developing trade relations with Western countries. However, a report from the private Iranian news agency Tasnim alleges that relations had begun to develop even before the nuclear deal was reached. According to a story released by Tasnim, Iran allowed Kentucky Fried Chicken (KFC) to open a branch in the country on May 10 on condition that they use a name "Iranian Halal KFC." Moreover, Tasnim alleged that Iran allowed Burger King, another American fast-food chain, to operate in the country. Iran has not been allowing the companies "who exported Western culture" to operate in the country since the Islamic revolution in 1979.

Iran is preparing for a trade and investment boom that could reshape the region after agreeing with world powers to curb its nuclear program, paving the way for sanctions that have stifled its economy to be lifted, according to Reuters.

With just under 80 million people and annual output of some $400 billion, Iran is set to be the biggest economy to rejoin the global trading and financial system since the break-up of the Soviet Union more than two decades ago.

Economists estimate that a third of Iranian industry may have been idled by the sanctions, which the U.S. Treasury estimates cut Iran's gross domestic product (GDP) by a fifth; much of this could now revive as trading ties with the West are re-established. Iran's trade with the European Union last year totaled 7.6 billion euros. In 2011, before banking sanctions hit, it was 27.8 billion euros.

Further out, many firms are likely to establish a presence in Iran through representative offices, partnerships and franchise agreements. Some Western fast-food and clothing franchises are already present, operating via Turkey, according to Tehran businesspeople.

Large-scale foreign direct investment may take at least a year or two; big Western firms will want banking networks to be rebuilt first, and will be wary of provisions for sanctions to "snap back" if Tehran is seen to violate the agreement.
RELATED TOPICS