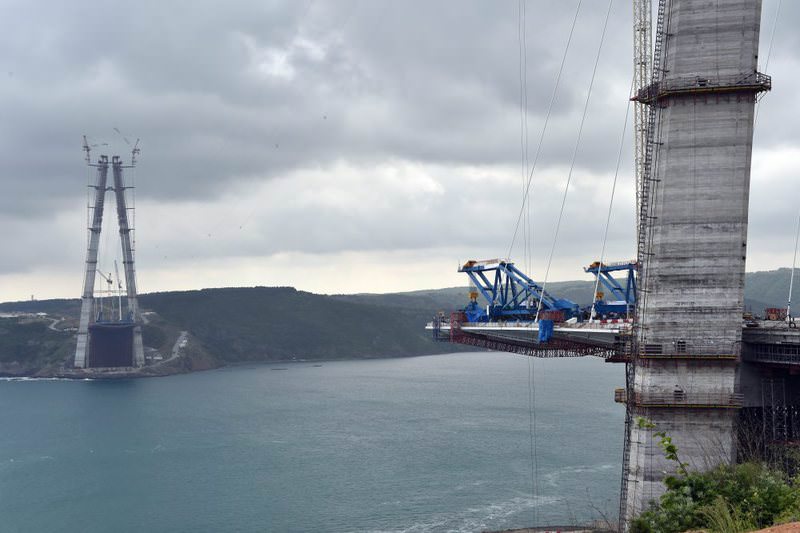 As soon as the AK Party won the elections to be in power, the sole party dispelling political uncertainty, initiated mega-projects continue without pause and new projects are now at the implementation stage

After the Justice and Development Party (AK Party) led by Prime Minister Ahmet Davutoğlu won elections to regain sole power, the mega projects initiated in various major industries including transportation, defense and energy will continue without pause. New projects that were at the decision stage are planned to be implemented in this new term. It is expected various projects including the third Istanbul airport, Istanbul-Bursa-İzmir (including İzmit Bay Bridge) highway and Northern Marmara Highway, the third bridge over the Bosporus and the Eurasian Tunnel will be completed in the near future. Projects like Kanal Istanbul and the three-level Istanbul Tunnel will change the face of Istanbul. In order to produce an electrical car domestically, infrastructure work, especially research and development will continue.

After the Justice and Development Party (AK Party) won the parliamentary elections singlehandedly to regain sole power, the mega projects initiated in various major industries including transportation, defense and energy will continue without pause. New projects that were at the decision stage are planned to be implemented in this new term. It is expected various projects including the third Istanbul airport, Istanbul-Bursa-İzmir (including İzmit Bay Bridge) highway and Northern Marmara Highway, the third bridge over the Bosporus and the Eurasian Tunnel will be completed in the near future. Projects like Kanal Istanbul and the three-level Istanbul Tunnel will change the face of Istanbul.

In order to produce an electrical car domestically, infrastructure work, especially research and development will continue. The contract for a long-range air and missile defense system is at the decision stage and the construction of the TR-Jet Plant to be established in Ankara will commence.

The Transportation, Maritime and Communication Ministry has accomplished investments exceeding $260 billion within the last 13 years and completed projects such as Marmaray and the Ankara-Istanbul High Speed Train Line. The construction of Istanbul's third airport, third bridge, the Istanbul-İzmir Highway - of which 37 kilometers is to be completed by the end of 2015 - and the Kars-Baku-Tbilisi train line and three-level Istanbul Tunnel has also begun.

Turkey is also finding its place in space. After the Türksat 4A and Türksat 4B satellites, the contract for Türksat 5A and 5B satellites will also be initiated within the next three months.

Another project for which a contract is about to be initiated is the three-level Istanbul Tunnel to relieve Istanbul's busy traffic. A 6.5-kilometer highway and metro line will cross under the Bosporus, and with this project, nine rail systems in Istanbul will be linked. The tunnel's contract process will be completed within the next few months and the tunnel is expected to be completed within the next five years.

The contract for the Çanakkale Bosporus Bridge to be built between Lapseki and Gelibolu is to be announced soon. The bridge, with a middle span of 2,023 meters and a length of 3,623 meters, will be the longest suspension bridge in the world in terms of middle span. The project will be implemented with a build-operate-transfer model.

The Kars-Baku-Tbilisi Railway, which has been developed to try to revive the Silk Road by connecting Turkey to Georgia, Azerbaijan and Central Asian republics, is meant to improve the economic and cultural cooperation between the countries and will also be completed soon.

Istanbul's third bridge over the Bosporus adds yet another link between Europe and Asia. Eight lanes and two railways will be on the same level of the bridge, which will be a product of professional engineering and advanced technology built by a team of mostly Turkish engineers. It will be among the most important bridges in the world with its aesthetic and technical features.

Istanbul's third airport, with a 160 million annual passenger capacity, is under construction in the Arnavutkoy district of Istanbul. The airport was contracted to the Cengiz-Kolin-Limak-Mapa-Kalyon Consortium, a joint venture of Turkish companies, in 2013.

Kanal Istanbul is an artificial sea-level waterway that will be built parallel to the Bosporus and will connect the Black Sea to the Sea of Marmara. The canal will provide relief to shipping traffic, particularly oil tanker traffic, passing through the Bosporus. The canal has a designed capacity of 160 vessels a day and is scheduled to be completed by 2023 at a cost of $15 billion.

The 433-kilometer Gebze-Orhangazi-İzmir motorway project, Turkey's largest highway project to date, will allow drivers to cover the distance between Istanbul and İzmir in the Aegean province in three-and-a-half hours compared to the current eight-hour trip. The project is being built through a public-private partnership and is scheduled to end in 2018. It will begin in the town of Gebze to the north of İzmit Bay, part of the Sea of Marmara, which is also part of the connecting waterway between the Black and Aegean Seas.

Also, an important financial center is planned to be built in Istanbul. The center is aimed at developing the conditions required for Istanbul to rank among the leading financial centers of the world. The $2.6 billion project is integral to Turkey's plan to make its economy one of the world's 10 largest.

The center, which is expected to be completed by 2018, will house the head offices of the country's financial market governing bodies, state-owned and private banks and related businesses. It will include over 4 million square-meters of office, residential, retail, conference, hotel and park space.

Erdal Tanas Karagöl, director of economics at the Ankara-based Foundation for Political, Economic and Social Research (SETA), said Turkey needs these projects to be finished as soon as possible in order to improve its rail, air and other transportation links. "Our country can generate wealth through these projects," Karagöl said. "Turkey is trying to position itself as an energy and trade hub for both the Middle East and Central Asia. The AK Party started these projects. Now that the AK Party will govern, they will be finished without further delay," Karagöl said. "Turkey can successfully attract foreign investment for mega projects now that the election results have ended the political uncertainty in the country," Karagöl added.

In terms of energy production, there are many projects to be finished. Turkey's first nuclear plant, at Akkuyu, will be built in the country's southern province of Mersin on the Mediterranean coast. The Russian state Rosatom Atomic Energy Corporation will build and operate the plant, which will have a lifecycle of 60 years and will cost around $22 billion. The latest technologies and safety features will be utilized in the plant. The project is expected to produce about 35 billion kilowatt-hours of electricity per year, and the planned four reactors of the plant are scheduled to become fully operational in 2023 - the 100-year anniversary of the founding of the Republic of Turkey.

Additionally, the Trans-Anatolian Natural Gas Pipeline (TANAP) project will carry natural gas from Azerbaijan's energy-rich Shah Deniz II field, through Turkey to Europe. The pipeline will run from Azerbaijan to Georgia and Turkey. It will later connect to the Trans-Adriatic Pipeline (TAP) in Greece to carry the gas further into Europe. Expected to cost $10 million to $12 million, TANAP will be an integral part of the larger strategic Southern Gas Corridor to ensure Europe's gas supply for decades to come. While TANAP is planned to become operational in 2018 with an initial capacity of 16 billion cubic meters, this amount is projected to reach 23 billion cubic meters by 2023 and 31 billion cubic meters by 2026.