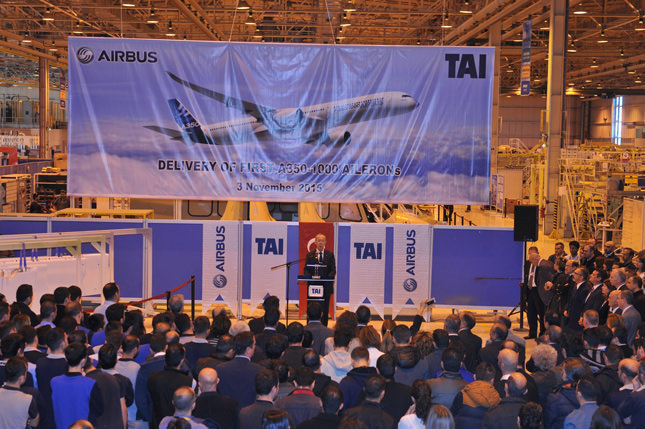 by Daily Sabah with AA Nov 04, 2015 12:00 am
Turkish Aerospace Industries Inc. (TAI – TUSAŞ) delivered its first A350-1000 aileron (little wing) set to European aerospace giant Airbus at a ceremony in its facility in the province of Ankara's Kazan district on Tuesday.

The aileron, which controls the plane's altitude, is a critical control surface assembled on the wings of an aircraft. Wholly designed and manufactured by TAI, the aileron sets to be used in the A350-1000 aircraft are made from carbon fiber.

TAI and Airbus are partners in the A350-900 program, which is the new family of long-range, wide-body jet aircraft the European aerospace company developed in two years. It would also be the first Airbus aircraft with both its fuselage and wing structures made primarily of carbon fiber reinforced polymer.

The statement released on the company website described the delivery as an important milestone contributing to the success of the program. It also said the ongoing A400M, A330 and A320 programs, in which TAI and Airbus are partners, are on schedule.

"As aviation grows to meet travel needs and business demands, Airbus designs new state-of-the-art aircraft as per customers' requirements with support from strategic partners. As such, TAI, a strategic partner, is continuously increasing its methods, procedures and engineering capabilities to contribute to more sophisticated Airbus components," the statement said.

Founded in 1973, TAI is a joint venture of the Undersecretariat of Defense Industries and the Turkish Armed Forces Foundation. TAI produces and conducts modernization projects on F-16 fighter jets, both for the Turkish Air Force and its allies, along with training aircraft, unmanned aerial vehicles and spacecraft electronic systems manufacturing. TAI also takes part in various military and civilian aircraft projects.