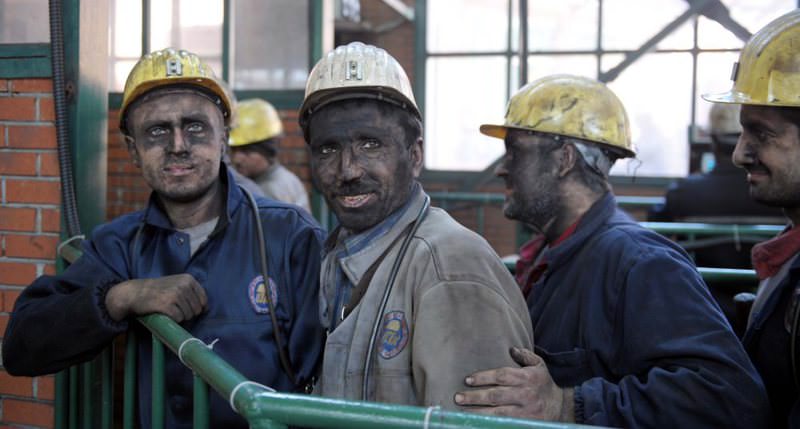 by Hazal Ateş
Nov 06, 2015 12:00 am
After the Justice and Development Party (AK Party) won the majority of votes in the Nov. 1 elections, the government will submit a proposal to the Minimum Wage Determination Commission at the beginning of December to increase the net minimum wage to TL 1,300 ($454), which will mean an increase of TL 400 for workers earning minimum wage as of Jan. 1, 2016. Moreover, under the new system, the minimum wages will be calculated depending on the occupational hazards the job poses, and the wages of workers who are employed in hazardous jobs like mining or construction will almost be doubled. The workers employed in jobs deemed not as hazardous will earn the base wage.

The list of hazardous occupations will also be reclassified. Currently, hazardous occupations include those involved with the production of leather, petroleum products such as mineral oil and paraffin, coloring additives, carbonate, enriched uranium and thorium products, organic chemicals and paint, mouth and teeth products, glass and mirrors, steel castings, nuclear reactors and parts, bombs, missiles and military ammunition. The minimum wage will be separately determined for each of these industries. The Minimum Wage Determination Commission will determine the minimum wage for the mining industry, but an increase is expected to be at least TL 2,600 as per the conditions of the Occupational Safety Bill submitted to Parliament last year. Along with monthly premiums, this amount is expected to exceed TL 3,000.

The exact minimum wage amount will be determined by the Minimum Wage Determination Commission, which includes representatives for workers, employees and government, and gathers in December each year.

Currently, the gross minimum wage's ratio to the monthly national income is approximately 47 percent. Once the minimum wage increases to TL 1,300 in January, the ratio will increase to 57 percent. The 30 percent increase will mean an additional TL 400 per month. This increase does not only concern five million employees earning the minimum wage but a wider part of society, since various economic indicators are adjusted according to the minimum wage. With this increase, Turkey will catch-up with Germany, where the minimum wage-to-national income ratio is 59 percent, while also surpassing various European countries. Currently, the U.K., France, Ireland and Belgium have higher ratios than Turkey, while other countries like Greece and Slovenia have similar ratios to Turkey. The minimum wage in Albania, Romania, Serbia, Hungary, Slovakia, the Czech Republic and Latvia are lower than Turkey, at around 160 euros to 300 euros.