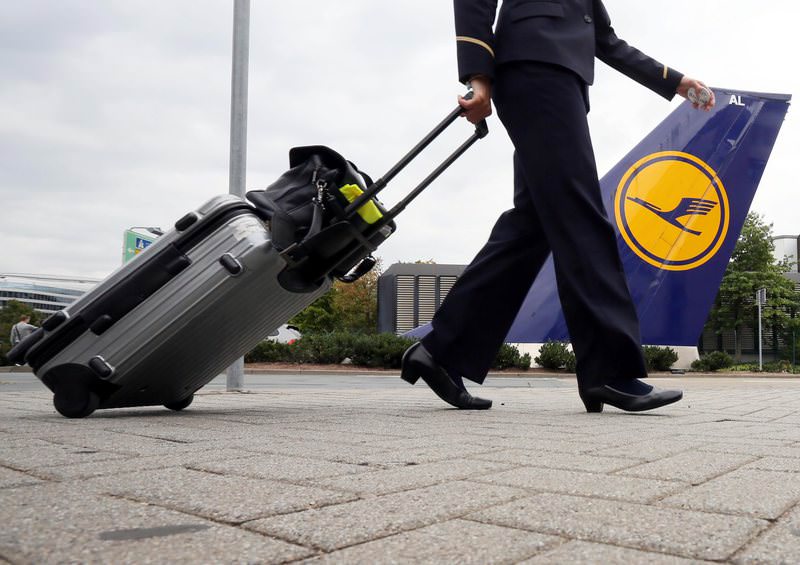 Flight attendant going back to work after the strike final demonstration, at the Lufthansa at the airport in Frankfurt am Main, Germany, 31 August 2012 (EPA Photo)
by German Press Agency - DPA
Nov 06, 2015 12:00 am
Flight attendants at Lufthansa are to begin their rolling eight-day strike by withdrawing crews from 2 pm (1300 GMT) at Frankfurt, the German airline's main hub, their union announced.

The union, Ufo, is demanding preservation of retirement benefits that enable many stewards and pursers to retire from 55. The strike threatens to pull the airline group back into the red after a quarter where its earnings rose by half and it forecast a strong full year.

Instead of holding an all-out strike, Ufo has adopted a rolling strategy, announcing its members will not crew any take-offs from Frankfurt for Friday afternoon and evening, whereas crews will work as normal at Lufthansa's number-two hub, Munich, through Sunday.

Crews were also pulled Friday at a minor field, Dusseldorf, where Lufthansa operates only a single daily international flight and 18 domestic connections.

"All passengers of Lufthansa must assume that their flight might get cancelled at the last minute," Nicoley Baublies, leader of Ufo, warned. The short-notice tactic has been adopted by the union to thwart Lufthansa counter-efforts to organize skeleton services.

He added the union was no longer open to talks, and would only call off the strike if Lufthansa made a substantial offer.

Lufthansa's 19,000 attendants had previously been docile compared to its pilots, who have struck 13 times in a similar dispute that is still simmering.

Lufthansa chief executive Carsten Spoehr is spearheading a cost-cutting drive to ward off competition from both budget lines such as Ryanair and mega-carriers from the Gulf such as Emirates.
Last Update: Nov 06, 2015 12:45 pm