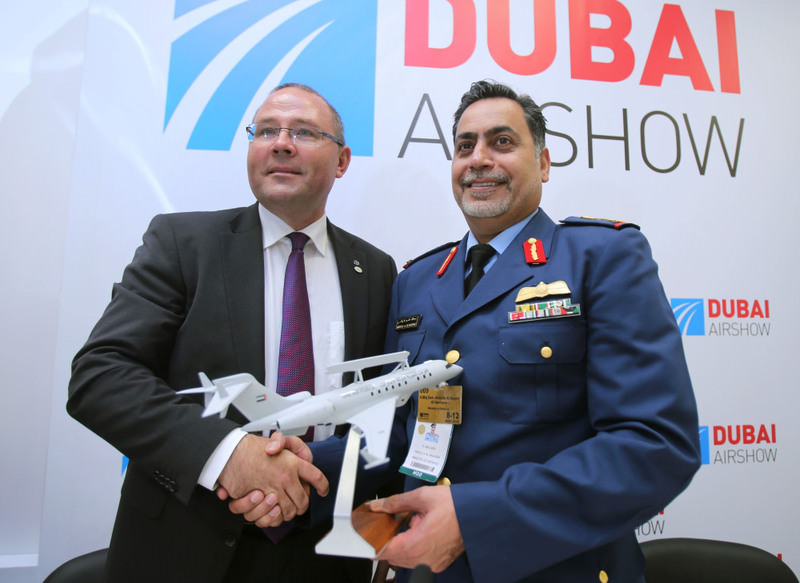 Saab President and CEO Hakan Buskhe (L), and UAE Major General Abdullah al-Hashimi shake hands as they hold a model of the Bombardier Global 6000 aircraft at the DubaiAirshow.
by Associated Press
Nov 10, 2015 12:00 am

A number of military purchases announced yesterday at the Dubai Airshow, including a $1.27 billion deal for upgraded Saab surveillance systems purchased by the United Arab Emirates, reflect a shift in focus at the biennial event this year from civil aviation to defense.

Saudi Arabia and the UAE have been leading the war in Yemen against the country's Shiite Houthi rebels since March and are part of the U.S.-led coalition bombing the Islamic State group in Syria and Iraq.

The United Arab Emirates announced a $1.27 billion deal for upgraded Saab surveillance systems aboard newly acquired Bombardier aircraft. Saab said the deal is for a new version of its Erieye radar system for the Bombardier Global 6000.

Lockheed Martin meanwhile announced it has been awarded a $262.8 million contract from the U.S. Air Force to service Saudi Arabia's F-15 sniper targeting system, search and track sensors and radars that allow for day and night low-level navigation.

Embraer Defense & Security said Lebanon would be acquiring six A-29 Super Tucano turboprop aircraft, a sale approved by the U.S. State Department in June. The deal includes logistics support for the aircraft, which are used in light air support missions, and training for Lebanese pilots and mechanics. The company did not disclose the value of the deal.

Despite a drop in oil prices and subsequently lower revenue for Gulf Arab countries, Saudi Arabia and the UAE are not expected to cut back on defense spending in the coming years. The kingdom and its rival Iran are backing opposite sides of the war in Syria and support opposing political groups in Lebanon and Bahrain. In Yemen, Iran has given political support to the Shiite rebels, though it denies Saudi accusations that it has armed them.

Compared with the last 2013 airshow, which included announcements of $140 billion in Boeing and Airbus orders by four major Gulf carriers, this year's event has been largely a chance for Gulf carriers to showcase their new planes and for international businesses to meet potential aviation and aerospace clients in the region.

Yesterday, India's Jet Airways announced the purchase of 75 Boeing 737 Max aircraft, estimated to be worth around $8.25 billion. Though Jet Airways declined to release the cost of the deal, Boeing lists on its website the price of the 737 Max 8 aircraft at $110 million each. The short-haul aircraft will likely be used for flights to Gulf destinations in the UAE, Qatar, Kuwait, Oman and Saudi Arabia. The UAE's Abu Dhabi-based carrier, Etihad, owns a 24 percent stake in Jet Airways.

Meanwhile, Dubai-based carrier Emirates announced it has signed another 12-year services contract worth $36 million with GE Aviation. The deal means GE Aviation will be tasked with maintenance, repair and overhaul of the GE9X engines that power the airline's fleet of 150 Boeing 777X aircraft. At the 2013 Dubai Airshow, Emirates announced it was purchasing 300 units of the engines, valued at $16 billion. The Dubai Airshow, which runs until Thursday, is taking place at the emirate's newest airport, the Al Maktoum International.