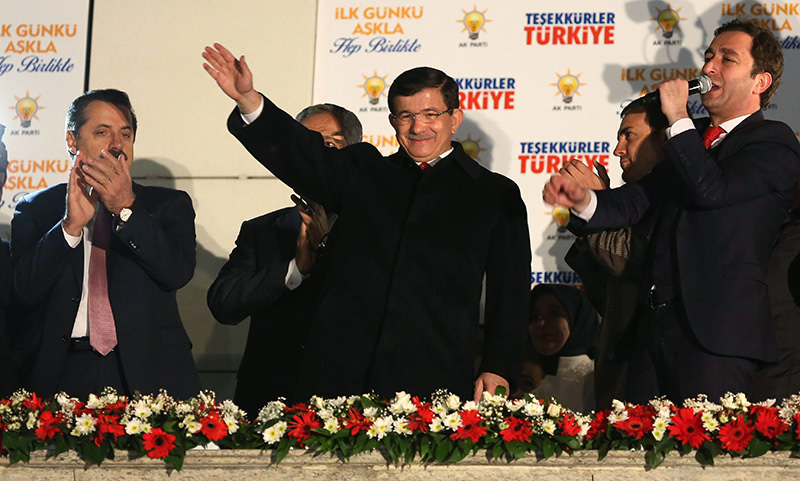 by Daily Sabah Nov 10, 2015 12:00 am
Prime Minister Ahmet Davutoğlu said all the election promises that the Justice and Development Party (AK Party) made in its Nov. 1 election manifesto will be fulfilled in the next three months at the latest.

Speaking on the state-run TRT Haber news channel, Davutoğlu said the government wants to take steps to minimize the spheres of tension and eliminate polarization. Davutoğlu also said that all the party's election promises, which included a hike in minimum wages, student scholarships, salary increases for policemen and military staff and funds for farmers, will be realized soon, adding that the new government program will be prepared by asking the opinions of employer and employee groups. "We want to initiate a medium and long-term and large-scale structural reform process. We will complete the first phase of political and economic reforms within six months. After the government program is read out, we will announce the quarterly, bi-annual and annual goals," the prime minister said.

Last month, the AK Party leader said that the promises made in the party's new election manifesto will cost TL 19 billion ($6.338 billion) to implement. He further claimed that these promises will not be a burden on the budget and no budget deficit will be incurred because of the new projects. The AK Party's election manifesto involves projects regarding areas like protecting economic and financial stability, increasing employment and supporting investments and production. Unlike the manifesto that consisted of more general terms prepared for June 7 elections, when the parties failed to form a single-party government, the AK Party preferred to announce concrete steps like promising to increase the minimum wage to TL 1,300 for the Nov. 1 elections.

Realizing that the general health insurance (GSS) debts burdened many youths, the AK Party promised to write off all its debts. The plan also included free general health insurance for university graduates for up to two years after they finish school. The AK Party further promised to increase the monthly financial support it provides to university students from TL 330 ($93.6) to TL 400. The AK party is also expected to provide free Internet to youths. Davutoğlu reiterated the AK Party's pledge to support recent university graduates who are looking at investing a TL 50,000 ($17,564) fund with no repayment. A further TL 100,000 in interest-free funding will be provided by the government where necessary. Apart from pledges made to young people, the AK Party said it would increase the minimum wage to TL 1,300. The party also guaranteed new financial privileges to senior citizens. If the promises are kept, retirees will receive an extra TL 1,200 a year. Retirees having to pay rent will also be pleased by the AK Party's pledges to provide flats with TL 250 installments. The AK Party promises not to neglect new mothers. New regulations will allow mothers to receive TL 300 for their first child, TL 400 for the second and TL 600 for the third, per month. Laws regarding maternity leave will also be improved.

According to the AK Party's election manifesto, the treasury redemption of up to TL 20 billion will be paid out through the Credit Guarantee Fund and the share of the finance sector in terms of gross domestic product (GDP) will expand. Via Treasury sources, the accessible funds to credit guarantee establishments will increase from TL 1 billion to TL 2 billion. An additional TL 10 billion will be given to the agriculture sector, and some taxation procedures regarding the profits from the increase in the value of the housing sector will be revised. The credits used in the financing of real estate will be revised considering their social and economic purposes. There will also be taxes imposed on luxury products and imports to discourage consumers from purchasing them. Moreover, there will be tax exemptions allocated as an incentive for the production industry. The farmers who are willing to combine and expand their territories to establish large-scale agricultural production houses will also be given incentives. Some bureaucratic procedures will be lifted regarding intermediary goods as well. Fiber optic infrastructural investments will be increased for quick and high-quality access. Banking aimed at contributing to economic development will be increased to provide for the long-term financing of investments. There will also be a reduced tax burden to facilitate the use of owner's equity.
Last Update: Nov 10, 2015 5:46 pm
RELATED TOPICS