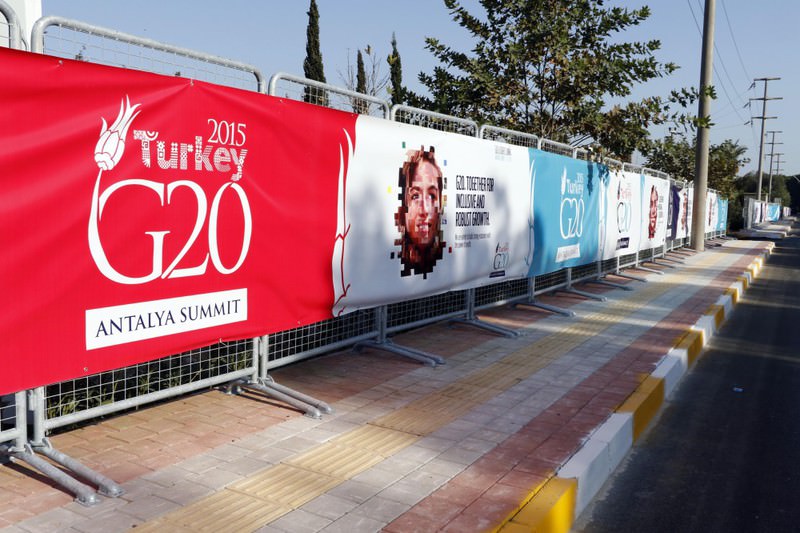 The G20 Leaders' Summit will gather the most powerful politicians and economists in Antalya to focus on global economic issues, the Syrian crisis and refugees under the presidency of President Erdoğan

The 10th meeting of the leaders of the G20 - consisting of the 19 biggest economies in the world and the European Union and deemed as the most crucial platform for solving global economic problems – is set to take place on Nov. 15-16 in Antalya under the presidency of Turkey to discuss prominent issues in global politics, diplomacy and economy. The global refugee crisis and the rising terrorist attacks are some of the most crucial topics on the agenda of the G20 Leaders Summit, along with the global economy.

Presidential spokesman İbrahim Kalın held a press conference in Ankara yesterday to share details of the summit. Kalın underlined that the main topic to be discussed in the summit will be the global economy, however the refugee crisis will figure on the agenda as a global political issue that cannot be considered separate from economics. "No one should expect the Syrian issue to be solved at the G20 summit," added Kalın. Representing approximately about 90 percent of the world economy, 80 percent of global trade and two-thirds of the world's population, the G20 is a platform that brings together developed and emerging economies, building a high profile in global economic relations with its inclusive structure.

Turkey was represented at the Prime Ministry level in the ninth summit and will be represented at a presidential level for the first time in the summit in Antalya this year. Two business meals and five main sessions are scheduled for President Recep Tayyip Erdoğan. Bilateral discussions are to kick off on Nov. 14 and some leaders will remain in Turkey to hold further meetings until Nov. 17.

Global economic issues will be discussed under three categories; employment, comprehensiveness and implementation. Along with issues concerning developed countries, the issues and problems observed in developing and underdeveloped countries, environmental problems and migration are expected to be discussed during bilateral meetings, political meetings and business meals.

The G20, which used to hold summits at the ministerial level, has organized summits at the leadership level since it had to find a solution to the economic and financial crisis in 2008. This year will feature leaders from the U.S., U.K., Russia, Japan, Canada, Germany, France, Italy, Australia, Brazil, Argentina, India, China, Indonesia, Mexico, Saudi Arabia, South Africa, South Korea and European Commission.

The G20 Leaders' Summit will take place in the Regnum Carya Golf & Resort Hotel, owned by the businessmen Fikret Öztürk and opened last year. Around 3,000 Turkish and foreign press members will attend the summit and the Kaya Belek and Kaya Palazzo hotels close to the Regnum Carya have been reserved for the press and media.

The official opening will take place on Nov. 15 with a speech by President Erdoğan, accompanied by his wife, Emine Erdoğan, and a portrait will be taken with all the leaders. Erdoğan will hold a press conference on Nov. 16 and answer questions from Turkish and foreign press members.

Under growth, investments, trade, employment and competitiveness titles, reforms and strategies for ending the global economic recession will be discussed at the G20 Summit.

Simultaneously, the B20 (Business 20) session, which has been initiated by Turkey, will bring together the business worlds of the member states. There is also the L20 (Labor 20), aiming to target issues regarding global employment, and the T20 (Think 20), striving to serve as a platform for the exchange of ideas, at the summit.

L20's suggestions for ensuring more comprehensive, balanced and sustainable growth and employment will be submitted to the leaders during the summit. The participants will discuss offers for creating more qualified labor and a better functioning labor market at the B20 session. The summit will start with T20 activities on Nov. 12 and L20 sessions will be held on Nov. 13 and Nov. 14. B20 meetings will take place on Nov. 14 and Nov. 15.
Last Update: Nov 10, 2015 5:35 pm