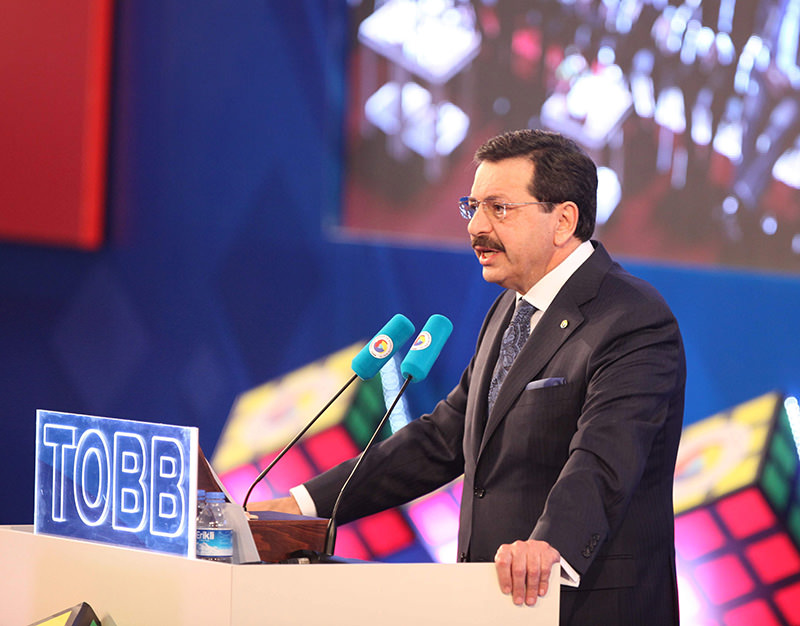 by Daily Sabah Nov 10, 2015 12:00 am
The Egypt visit of Rıfat Hisarcıkoğlu on Monday, the chairman of the Union of Chambers and Commodity Exchanges of Turkey (TOBB), accompanied by three experts, was interpreted as the first high rank visit to the country since relations were strained following the ousting of democratically elected President Mohammed Morsi by Abdelfattah el-Sissi in 2013.

According to the information obtained by Daily Sabah, Hisarcıklıoğlu attended the Islamic Chamber of Commerce, Industry & Agriculture's (ICCIA) 21st board and 31st general assembly meetings as Hisarcıklıoğlu currently holds the vice-chairman post in ICCIA. As the vice-chairman of Association of European Chambers of Commerce and Industry (Eurochambres), Hisarcıklıoğlu also attended the EU-Africa Energy forum. The delegation held talks with the Chairman Ahmed al-Wakil and officials from Federation of Egyptian Chambers of Commerce regarding the trade relations among two countries. TOBB sources stated that Hisarcıklıoğlu visit to Egypt was related with his titles in ICCIA and Eurochambres.

The visit was carried out by the knowledge of President Recep Tayyip Erdoğan and Foreign Minister Feridun Sinirlioğlu, and the delegation was reportedly greeted by Turkey's Charge d'Affaires in Cairo, Ali Rıza Güney. The last visit which can be classified as high rank from Turkey to Egypt was carried out in 2013 by main opposition Republican People's Party deputies and former ambassadors Faruk Loğoğlu and Osman Korutürk upon the invitation of the Sissi administration.

Although the relations among two countries are at a historic low in diplomatic terms due to the coup in Egypt and Turkey's reaction, trade among two countries, especially Turkish exports, have recently been on an increasing trend.

In 2005, the trade volume among two countries was lower than $500 million while in 2010, it increased to $3 billion with Turkish investments in Egypt amounting to $1 billion. This positive environment was stalled as the Mubarak regime was overthrown with the protests started in late 2010 as part of the Arab Spring, and the coup staged by Sissi further harmed the relations.

The two countries were participants in the Syria talks carried out in Vienna on October 30, and Turkey's Presidential spokesman Ibrahim Kalın described the involvement of Egypt to the talks, along with Iran, as a positive development.
Last Update: Nov 10, 2015 2:43 pm
RELATED TOPICS