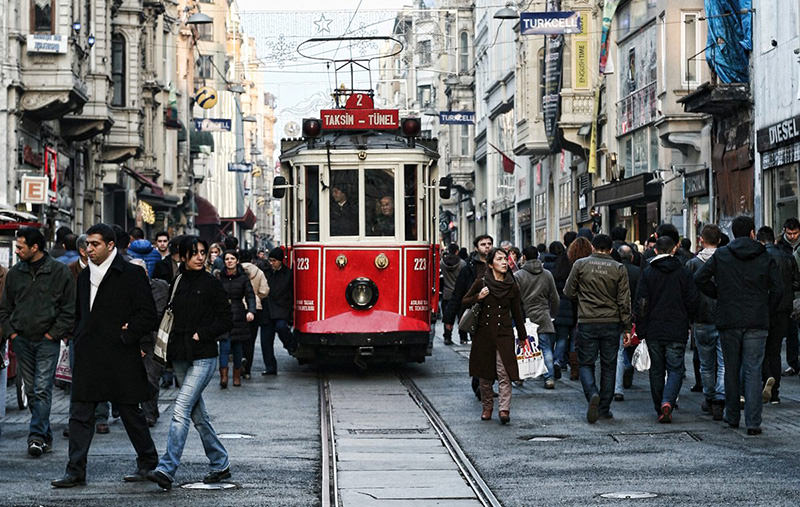 by daily sabah
Nov 11, 2015 12:00 am
The Istiklal Street and Historic Tram Lane Application Project, with its 15 million Turkish lira ($5.2 million) budget, became one of the most prominent items of Istanbul Metropolitan Municipality's (IBB) investment and service budget for 2016.

The TL 16.1 billion ($5.57 billion) budget will be put to vote in the municipal council on Nov. 12. The TL 12.7 billion part of the budget will be funded through taxes, while loans will be used for the remaining part.

Mayor Kadir Topbaş stated that a total of 630 projects, which include 358 investments and 272 services, will be funded through the budget. He added that 67 percent of the budget, which account for TL 8.26 billion, was spared for investments. New investments will receive TL 4.36 billion from the budget.

Transportation again received the largest share from the budget with TL 5.5 billion, which accounts for 44.7 percent of the total budget. TL 1.8 billion was spared for the European Side Rail Systems Directorate while the Asian side received TL 1.3 billion.

For one of the main items of the 2014 local election campaign, the underground road tunnel to cross the Golden Horn, TL 100 million was spared for the years of 2016 – 2018. Zoning and road construction works in Kadıköy district's Fikirtepe neighborhood received TL 9 million.

Budget items included road tunnel projects between Dolmabahçe, Fulya, Levazım and Armutlu neighborhoods in central European district of Beşiktaş, Üsküdar – Çekmeköy subway project and Beykoz – Karlıtepe and Beykoz Meadow - Hz. Yuşa (Prophet Joshua) Hill cable car projects on the Asian side. The cable car project stretching from the district of Mecidiyeköy on the European side to Çamlıca Hill on the Asian side was also one of the most prominent items included in the budget.
Last Update: Nov 11, 2015 12:45 pm