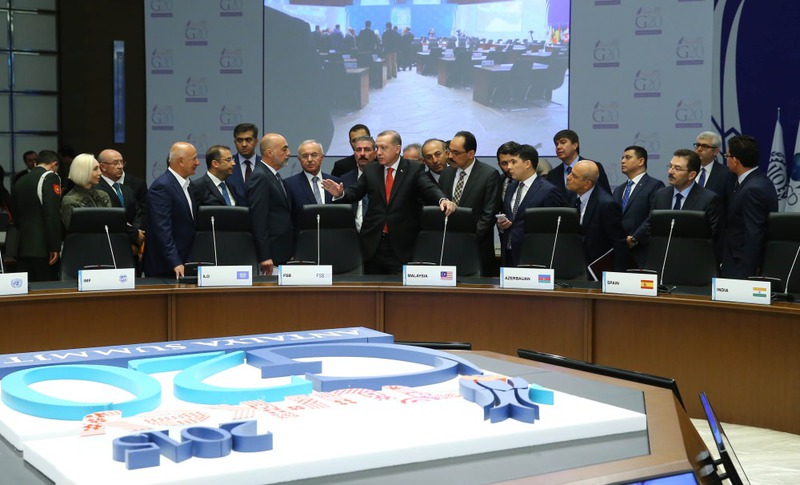 As Antalya readies to host world leaders on Nov. 15-16, the country's perfectionist president checked preparations in person Tuesday. Turkey will be represented at the presidential level at the G20 summit for the first time by President Erdoğan

President Recep Tayyip Erdoğan examined the preparations for the G20 Leaders Summit in Antalya on Tuesday. The 10th meeting of G20 leaders from the 19 biggest economies in the world and the European Union and deemed the most crucial platform for solving global economic problems is set to take place on Nov. 15-16 in Antalya under the presidency of Turkey. Since Turkey will be represented at the presidential level at the summit for the first time, the country's perfectionist president went to Antalya to check preparations in person.

Antalya was preferred due to its accommodation, transportat and other logistic infrastructure for the summit. As it is a natural, historic and cultural port and trade center, Antalya is beneficial for introducing Turkey to a wider audience.

Three-thousand members of the press will attend the summit and a press center will be established at International Flights Terminal 1 at Antalya Airport where they can obtain their accreditation cards and then move to the Belek district where the summit will take place. The international press center in Belek will open its doors on Nov. 12 and will be open 24/7 until Nov. 17 and broadcast the meetings. Kaya Hotel Group will organize a culture zone, "Home," on Nov. 13 for members of the press and will display Turkish music, art and history through promotions and offer Turkish food and delicacies and Turkish coffee.

Call center for the press

The Metropolitan Municipality of Antalya has set up a call center with the number 444 0 420 for the press. The center will reply to calls in English and answer questions about health centers to places to visit. If members of the press call the center and say that they are lost in the city, officers from the municipality will help.

A desk will be available at Antalya Airport with brochures, DVDs, photos, city maps and G20 programs. A 24-hour ring shuttle service will enable visitors to reach the city center. Mayor Menderes Türel is expected to organize a gala dinner for the press.

Since leaders from G20 countries will be visiting the region, security measures will be at the highest level and Belek has been designated a high-security zone. From police to the Coast Guard, all security units have taken various precautions. There will be 12,000 security guards, of which 11,000 will be police officers and the remainder from the gendarmerie, will be in charge during the summit.

More than 350 Mobile Electronic System Integration (MOBESE) cameras have been installed between the airport and the hotel region in Belek with license-plate-recording and face-recognition systems.

Thirty out of the 46 hotels in Belek have been designated as the summit zone and entry and exits will be controlled. Only people with authorization will be allowed in the zone. The remaining 16 hotels have been reserved for various participants from the business world, nongovernmental organizations, women's organizations and others.

Military units in Antalya and the General Directorate of Civil Aviation will also take necessary precautions and, if necessary, a no-flight zone will be established.

All the planning for the G20 summit involved worst-case scenarios and therefore, the Health Ministry assigned at least one health team to all committees. Two additional helicopter ambulances were brought to the region and throughout the summit, along with nine motorcycle ambulances and 68 ambulances will be at the ready at the summit.

Social programs have been organized for the spouses of participants in Antalya with its history and nature. The programs will be arranged and announced after the required security investigations are made and measures are in place.

Since the G20 Leaders Summit will generate traffic, the General Directorate of Highways, Antalya Metropolitan Municipality and various other state institutions will cooperate. Work required at crossroads, roads and subways have been completed and municipality teams have hung the flags of guest countries at the exit of Antalya Airport. All asphalt, bridge, pavement and landscaping works of the 32-kilometer road from the airport to Belek Tourism Center have been completed. Infrastructure for telephones, Internet and electricity has also been reinforced.

Final preparations have been completed in hotels near Belek where the summit is scheduled to be held. Three districts in the province - Üçkumtepesi, Taşlıburun and İskele - have been declared red zones. The number of staff in the surrounding 22 five-star hotels has been increased and they were given English lessons to speak more fluently.

Hotels made great efforts to provide comfort to G20 leaders. One hotel has been allocated for each delegate to come from guest countries and rooms have been redesigned in line with requests. The escalators that will be used by leaders have been coated with film and windows have been replaced with bullet-proof glass. Movable furniture has been either removed or fixed in some hotels on request.

Although there are luxurious and comfortable villas in hotel complexes that were designed by world-renowned architects, they were not preferred for security reasons. Instead, royal suites and suites in main buildings have been allocated for leaders. Also, the hotels' management contacted the hotels where G20 leaders previously stayed to receive information about their demands and prepared alternative rooms accordingly.

Leaders to come with cooks

Meanwhile, technical teams, especially security teams, have started to arrive to Belek. Reportedly, all leaders will be accompanied by their kitchen teams, from cooks to food control.

A G20 application has been developed for smartphones. The "G20 Antalya Summit" application includes details about the program, transportation, maps, photos and Antalya's climate.

Orbicular LED armatures running on solar power will be installed on the cliffs on both sides of the waterfall to introduce a homogenous view. Colorful, flashing globe-shaped lights will give a magnificent view. The project cost TL 1.69 billion ($579 million). The summit which was held in Brisbane, Australia last year will be held in Hangzhou, China in 2016.
Last Update: Nov 11, 2015 11:45 am