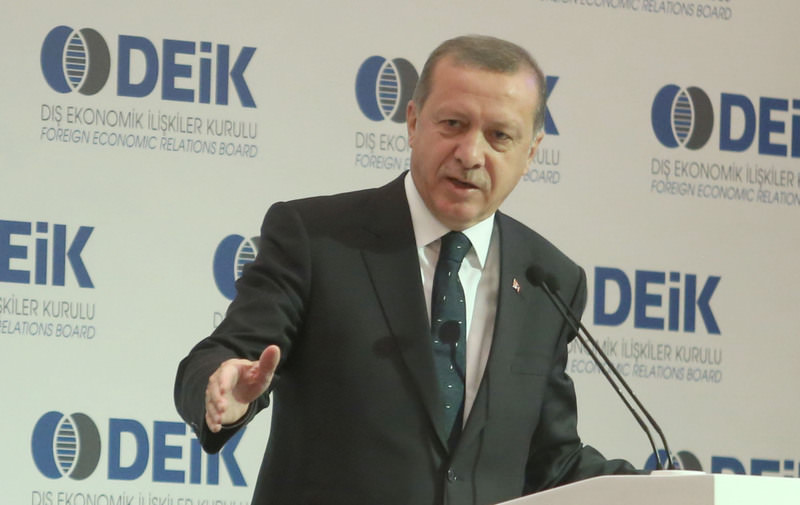 Along with economic issues, the refugee crisis is expected to appear on the agenda of the G20 Leaders' Summit. Erdoğan is expected to warn of an additional 3 million Syrian refugees that could leave their countries

With just a couple of days left before the G20 summit begins, meetings were held between officials from the Ministry of Foreign Affairs, Interior Ministry, Turkish General Staff and the National Intelligence Service to discuss scenarios for the worsening Syria crisis. The conclusions drawn from the discussions have been presented to President Recep Tayyip Erdoğan. Erdoğan will hold meetings with U.S. President Barack Obama, Russian President Vladimir Putin and various other European presidents to discuss possible solutions for the conflict in Syria.

Erdoğan will note in his meetings that the crisis is at a different stage now after Russia's attacks in Syria, and the deepening crisis will cause larger migration waves. An invasion of Aleppo by the Assad regime will create thousands more refugees, and if ISIS continues its offensive, a major human security issue will develop. Another point he will bring up will be regarding the refugee crisis.

As a neighbor of Syria, Turkey worries that around 2 million more immigrants might come to Turkey in addition to those who are already here, which will mean a total of 4 million Syrian immigrants could be living in Turkey. President Erdoğan will underline that this is beyond Turkey's capacity to accommodate immigrants. Moreover, around 1 million Syrians would head to Europe and the refugee situation that the E.U. is trying to control would deteriorate even further.

The PKK-linked Democratic Union Party (PYD) is currently accused of "ethnic cleansing" by Amnesty International reports. If PYD crosses the Euphrates River, the invasion will cause residents to flee and create new ethnic clashes. President Erdoğan will tell world leaders that a PYD advance west of the Euphrates River is a red line for Turkey.

President Erdoğan will also present Turkey's suggestions about this picture. Ankara is requesting an ISIS-free zone in north Syria to allow immigrants to return to their countries. "There is the issue of establishing a no-fly zone and a terror-free zone. Our allies are gradually all agreeing on the terror-free zone. There are also positive developments regarding the no-fly zone and the land operations," President Erdoğan stated.

Along with President Erdoğan's meetings with Obama and Putin, he is also expected to hold bilateral meetings with presidents of the U.K., Japan, Canada, Germany, France, Italy, Australia, Brazil, India, China and Saudi Arabia.

President Recep Tayyip Erdoğan said the world cannot be considered a field of activity of developed countries and underlined inclusivity ahead of the G20 Leaders Summit in Antalya on Nov.15-16. While Antalya readies to host the world's most powerful leaders, Erdoğan stressed the importance of globally joined work to discuss and solve the problems of low-income and developing countries. Speaking at the Foreign Economic Relations Board (DEİK) business councils meeting, Erdoğan said they will bring these problems to the agenda of the G20 summit under the theme of inclusivity.

Meanwhile, Deputy Prime Minister Cevdet Yılmaz said Turkey has gone through a successful G20 presidency period, adding: "Everyone was pleased with our presidency. Turkey establishes a balance between developing and developed countries."

Explaining that transparency and accountability mechanisms were created during Turkey's presidency, Yılmaz said G20 countries laid out over 1,300 commitments in the previous period and the two mechanisms under the Organization for Economic Cooperation and Development (OECD) observe whether such structural reforms are fulfilled. So far, 48 percent of the commitments have been fulfilled, he said. Turkey has held 90 group meetings for the Business 20 (B20), Labor 20 (L20), Women 20 (W20), Civil 20 (C20) and Young 20 (Y20) during the year.

Erdoğan also remarked on the need for the G20 to follow up with its decisions. "We have followed and will continue to follow the work of all countries to reach the 2 percent global growth target," he said.

19 proposals for G20 leaders from the business world

The Union of Chambers and Commodity Exchanges (TOBB) and B20 Chairman Rıfat Hisarciklioğlu said that the B20 Turkey will make 19 proposals to G20 states. In addition, the chairman of the L20 Turkey and Türk-iş, Ergün Atalay, said that they arranged appointments with many world leaders such as German Chancellor Angela Merkel and President Vladimir Putin of Russia and they will discuss the problems of workers on a global level at the G20 summit. Hisarciklioğlu said that as a consequence of the meetings they have organized throughout the last 12 months, they came up with 19 proposals for G20 leaders. Hisarciklioğlu said the first proposal is on world trade and that the size of the world trade cake did not grow, saying that protectionist policies are no good for global trade, adding that they will request that the World Trade Organization's (WTO) Trade Facilitation Agreement (TFA) be put into practice as soon as possible. Hisarciklioğlu said another proposal is that they would prefer the global financial system, which has been exposed to various reforms since 2008, to have more certain and conventional rules. Hisarciklioğlu said another proposal about infrastructural investments that they demand from G20 leaders is that 10 and 20-year infrastructural investments be prepared so that the private sector can face a brighter future through private and public sector cooperation models to satisfy necessary real estate needs.

Another proposal concerns expectations of small and medium-size enterprises (SMEs) to enable them to comply with world standards and access world markets. Stressing that SMEs will have the chance to raise their voice in such a big organization for the first time, Hisarciklioğlu said they request that world leaders support the World SME Forum by recognizing and supporting the forum as a worldwide labor organization that defends the rights of the SMEs.

Prime Minister Ahmet Davutoğlu is preparing to host Japan and Greece ahead of the G20 Summit in Antalya. Davutoğlu will discuss the cooperation opportunities with Japanese Prime Minister Shinzo Abe, and right after the G20 Summit, he will host the Greek Prime Minister Alexis Tsipras. Visiting Turkey as prime minister for the first time, Tsipras will make proposals for active coordination in dealing with the refugee crisis.

On Nov. 14, Davutoğlu and Abe will attend both the Turkish-Japanese labor forum organized by the Japanese external trade organization and the External Economic Relations Council (DEİK). Davutoğlu and Abe will also talk about regional issues. Thereafter, Abe will go to Antalya to attend the G20 Summit. After the G20 Summit, Davutoğlu will host Tsipras, who previously called Davutoğlu to express his desire to visit Ankara following the Justice and Development Party's (AK Party) success in the Nov. 1 elections. Tsipras will visit Turkey on Nov. 18 to discuss regional and international issues as well as topics on bilateral relations. During Tsipras' visit to Ankara, it is expected that the topics of discussion will include refugee boats in the Aegean Sea and a proposal for cooperation.