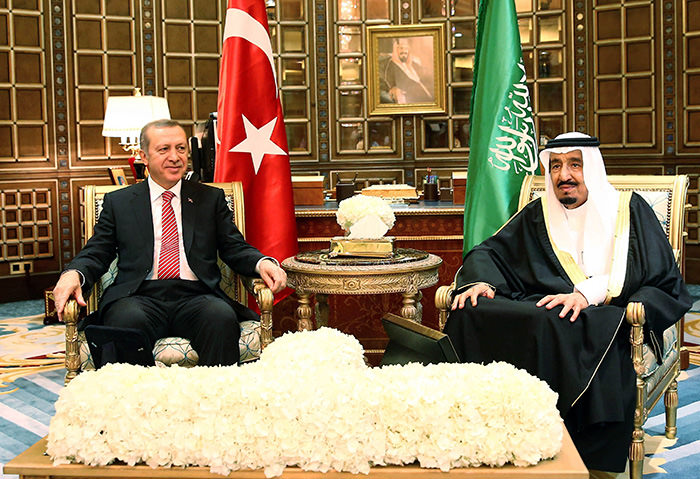 by Ali Ünal
Nov 13, 2015 12:00 am
The G20 summit, which will be held in Antalya over the weekend, is expected to function as a golden opportunity to improve Turkish-Saudi relations. The bilateral trade volume, which has seen a fivefold surge over the past decade, is also expected to gain momentum thanks to the summit.

It is said that the summit will play a key role in taking bilateral political, economic and security-related relations to a more strategic and diversified level.

As the two fastest growing G20 states, Turkey and Saudi Arabia also play a unique role in acting as the pillars of economic prosperity and political stability in the region. The two have been inching closer and their political and economic ties, although already strong, can benefit more from an energized leadership in both capitals to propel the relationship to a higher strategic level. In these times of uncertainty, the two countries can make use of their strength and stability to help mitigate the various crises in the Middle East. Two elements in particular make this G20 meeting a springboard for a turning point in the relationship.

The first is the new mandate that the Turkish leadership continue taking the country on a path toward prosperity, stability and security. The second element is the qualitative change that the current Saudi leadership brings to its regional leadership and its new and energized foreign and domestic policies.

Turkey and Saudi Arabia have signed military and economic cooperation agreements in the last few years and economic relations are improving between the two countries. Turkish-Saudi trade, for example, has been increasing steadily over the last 10 years, and it increased from $1.1 billion in 2004 to $5.4 billion in 2014, after signing mutual investment protections and treaties to avoid double taxation, according to published reports.

The Saudi delegation will include Deputy Crown Prince HRH Mohammad Ben Salman, the head of the Saudi Economic Council, Saudi Arabia's minister of defense and the confidante of the King, an important presence at any economic or defense conference. The young prince has introduced a new vision for the Saudi economy and government. Saudi Arabia boasts the largest GDP in the Middle East and is working on plans to diversify the economy. The Deputy Crown Prince is at the forefront of this effort. He envisions an economy not dependent on oil but on the many important facets of the Kingdom's rich natural resources and human capital.

The new Saudi approach, which is supported by the Kingdom's leadership and especially by the Deputy Crown Prince, strives to create a more equitable distribution of income, investments in talent and higher levels of professionalism. It also seeks to streamline resources and cut spending.

Saudi Arabia's leadership envisions multiple short- and long-term plans that aim to promote excellence in work and conduct. To this end, the Kingdom is recruiting top international experts and companies to help Saudi Arabia meet its goals.

The Public Investment Fund is overseen by the deputy crown prince who seeks to make it one of the biggest funds in the world. Other new Saudi plans focus on improving the work force and the labor market by introducing stricter work ethics, standards and conduct.

Turkey can find a reliable and formidable partner in Saudi Arabia and its new leadership, which has shown its resolve in Yemen and strategic vision in the region. This visit to Turkey by King Salman and his Deputy Crown Prince can build on the important base that the Kingdom has laid down with President Erdogan during his visit to Saudi Arabia in March. The two leaders expressed their commitment to develop the relationship into a strong and durable relationship for the benefit of peace and security in the region. The two leaders agreed during the visit to expand the bilateral relationship in the political, economic, security, defense and public realms.

The G20 visit can build on that and be the catalyst to start a new energized relationship under the new Saudi leadership and the new Turkish government with the mandate the President and his party have received from the Turkish people.

The timing of the G20 summit, at this important historical moment for the region, is ideal for setting an agenda for more active Saudi-Turkish cooperation. Their position in the G20 summit is critical to any successful outcome of the summit. The two countries have been cooperating on many regional issues and are committed to establishing a stable and peaceful region. Their economic relationship is expanding and becoming more diversified.

This particular summit holds much promise – if it is used properly to push the relationship to a higher and more beneficial level. The presence of King Salman and the deputy crown prince guarantees that whatever decisions are taken during the summit, it will be implemented in the bilateral relationship immediately and put on fast track with solid clad commitment.

Antalya's summit may be critical for 20 important countries and their guests in light of the challenges that the region and the world face, but the success of the summit falls to Turkey and Saudi Arabia who hold the keys to the political and economic stability of the region.
Last Update: Nov 13, 2015 10:08 pm