G20 Leaders Summit with a Turkish flair begins in Antalya 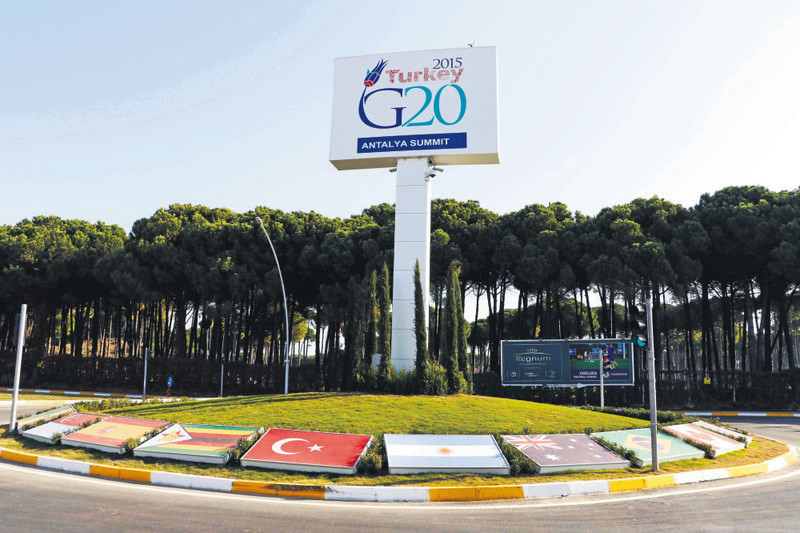 With the terms of Erdoğan an unforgettable G20 summit begins in Antalya on Sunday. The refugee crisis has become an unavoidable issue on the agenda

Leaders of the world's 20 largest economies are set to meet in Antalya on Sunday for the Group of 20 (G20) Leaders Summit. The two-day summit will be focusing largely on global economic challenges, like boosting global and sustainable growth, development and climate change, investment, trade and energy. Turkey will be represented on the platform at the presidential level for the first time. Under the chairmanship of President Recep Tayyip Erdoğan, the leaders will also discuss global terrorism and the widening refugee crisis that now stretches from Afghanistan, Somalia and Libya to Syria and Europe. According to some officials, this shall be the second time a topic other than global economic policies will appear in the G20's agenda since its establishment in 1999. As a neighbor of Syria, Turkey worries that around 2 million additional immigrants might come to Turkey, meaning a total of 4 million Syrian immigrants could be living in the country. President Erdoğan is to underline that this is beyond Turkey's capacity to accommodate immigrants. Moreover, around 1 million Syrians could head to Europe and the refugee situation that the E.U. is trying to control would further deteriorate. "As the G20 leaders gather in Turkey this weekend, they will have on their minds heartbreaking images of displaced people fleeing countries gripped by armed conflict and economic distress," Christine Lagarde, the managing director of the International Monetary Fund (IMF), said in a blog ahead of the summit.

She was referring to the devastating images of a drowned Syrian toddler washed ashore on the beach of Turkish resort town Bodrum in September. The incident proved how severe the Syrian refugee crisis had become, as yet another group of refugees drowned in the Aegean after two boats sank. Lagarde also underlined that migration is a global issue and joint work to address it is essential. On the other hand, President Erdoğan is determined to change the "talk shop" image of the G20. Recalling a Persian idiom that says "They sat, they talked and they disassembled," Erdoğan said they aim to change the image of the G20 and turn it into a platform which offers concrete solutions and follows up on the results.

Also, speaking to Anadolu Agency, Erdoğan said Thursday that participants in the G20 summit in Antalya will not forget the event, claiming it would be the most productive and dynamic conference among the meetings held so far. "We've had an important preparation process and it has been successful. I believe both we, as a host country, and our guests will find a very different atmosphere here compared to the former meetings, in terms of accommodation and meeting venues - and it will be an Antalya summit, which they [the participants] will not forget," Erdoğan said.

The Turkish president also stated that the G20 shouldn't be limited to an economic agenda. "G20 is a forum where economic components come together in the world but is it limited to that alone? No. Very different subjects in the world's agenda could emerge, especially during the working dinners. For example, climate change is one of the subjects that will be discussed during the dinners. International terrorism is again one of the important topics that we will discuss," Erdoğan said.