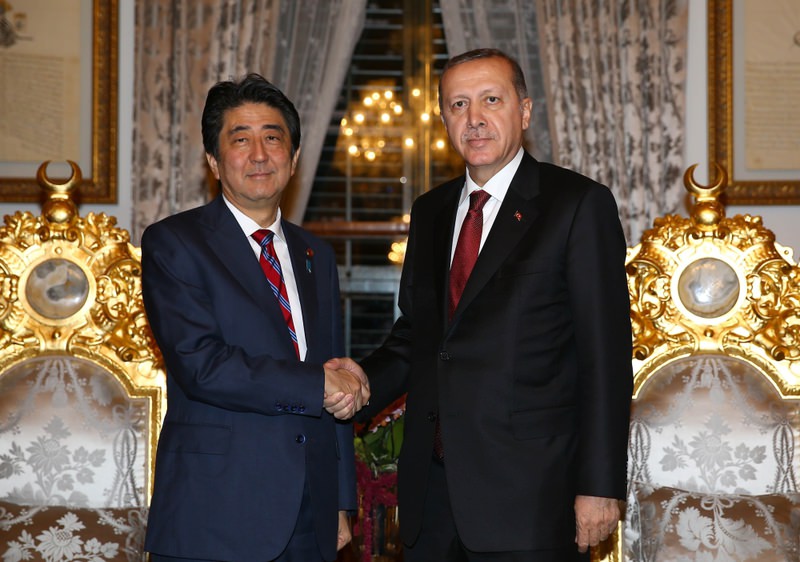 In an exclusive interview with Daily Sabah, Japanese Prime Minister Shinzo Abe expresses his gratitude to Turkey for hosting 2 million Syrian refugees as well as for the G20 Summit, which is set to contribute to sustainable global growth

Daily Sabah: We would first like to hear your expectations from this year's visit to Turkey based on the 125 years of fellowship between Japan and Turkey. There are numerous joint projects from the nuclear power plant to large-scale infrastructure projects, from academic projects to cultural exchange projects to be initiated jointly by the two countries. What are your views on these joint efforts?

Abe: It's the 125th anniversary of the Ottoman frigate Ertuğrul accident, which occurred in Japanese waters in 1890 and is deemed as the basis of the friendship between the two countries, this year and the 30th anniversary of the rescue of Japanese people in Tehran in 1985 during the Iran-Iraq War.

In this special year, we held a productive meeting with Turkish President Recep Tayyip Erdoğan last month in Japan, and now I'm deeply pleased to have the opportunity to visit Turkey for the third time during my prime ministry. I believe with close contact between Japanese and Turkish leaders and through frequent meetings, the cooperation and friendship between the two countries can advance.

During my visit this time, I will meet with Erdoğan in Istanbul, and additionally, we will be attending the Turkish-Japanese Business Forum, to which the leading names from the Japanese business world will participate, together with Turkish Prime Minister Ahmet Davutoğlu. I hope the forum serves as a platform where leading entrepreneurs from both countries can exchange their views and ideas, which will help intensify and enhance economic and investment relationships and cooperation between the two countries.

Japan has provided cooperation mainly to the nuclear power plant to be established in Sinop and various other mega infrastructure projects, which are bound to be symbols of Turkey, such as the İzmit Gulf Bridge. I kindly hope that Japanese entrepreneurs and investors will contribute to the intended bridge, electrical power plant, hospital, fast-train line and communication satellite projects to be completed by 2023, the 100th anniversary of the foundation of the Turkish Republic, with their technologies and innovations.

I also intend to improve the friendship and cooperation between the two countries by attending the gala introduction event for "Ertuğrul 1890," a Japanese-Turkish co-production telling the rescue story of Japanese besieged in Tehran and brought to Turkey and also the Ottoman Frigate Ertuğrul.

As the film also depicts, Turkey, which was grateful for the helping hand the Japanese lent to Turkish officers and sailors, returned the favor 95 year afterwards. Further, both countries had been devoted to helping each other during the Great East Japan Earthquake of 2011 and the Van Earthquake in Turkey. I believe the relationships have advanced based on the deep connections and friendship between the people of both countries.

The town twinning founded between the Metropolitan Municipality of Istanbul and my home town, Shimonoseki, has continued for the past 40 years. I'm pleased to attend the opening ceremony of the Baltalimanı Japanese Garden established in Istanbul with technical support from the Shimonoseki Municipality and efforts from Turkish citizens. However, the power of cultural and social interaction between the two countries is not limited to this garden. Japanese and Turkish citizens won Nobel prizes this year, which is proof of the highly advanced science and technology levels of both countries. With the opening of the Turkish-Japanese Science and Technology University, which is currently on the agenda, I hope exchange programs that strengthen ties and academic cooperation between the two countries will be established.

Daily Sabah: What are Japan's targets for the G20 Summit in Turkey? What do you think will be on the global agenda in 2016? What kind of a stance and approach will the Japanese government take to tackle the deepening Syrian civil war and refugee crises?

We would underline the importance of each country to focus on and offer solidarity to ensure sustainable global growth. Further, we also highlight the importance of "high quality infrastructure investments" for strong and comprehensive growth.

In my opinion, the G20 leaders should give strong messages regarding the importance of establishing a new international framework regarding climate change at the COP21 Climate Conference to be held in Paris at the end of this month.

We are extremely concerned about the deepening crisis, deteriorating human conditions and the extension of such a period in Syria. I would like to express my gratitude to Turkey, which has accepted about 2 million Syrian refugees. Japan has granted $15 million through nongovernmental organizations and international associations, including the Office of the United Nations High Commissioner for Refugees and the United Nations International Children Emergency Fund to help refugees in Turkey.

It has become a great necessity to help the 10 million Syrian refugees and displaced persons and the nations that have welcomed refugees to prevent the crisis from deepening any further. Along with evident and obvious issues, it is of the utmost importance to resolve issues by creating a labor force that will strive to resolve issues like the refugee crisis, to restore welfare and stability in the region and help the reconstruction of the region.

Along with humanitarian aid, including food and medicine, Japan strives to support the restoration of infrastructure and training of human resources. The total aid Japan has provided to Syria and neighboring countries since the start of the crisis has exceeded $1.1 billion. This aid also includes long-term necessities for children and women like education along with short-time support such as health, hygiene and food aid.

We believe the main political solution, which will be determined eventually by the Syrians, should be based on the 2012 Geneva Declaration on Armed Violence and Development. Japan will continue to provide humanitarian aid and support to political dialogue, which it perceives as being integral and inseparable.