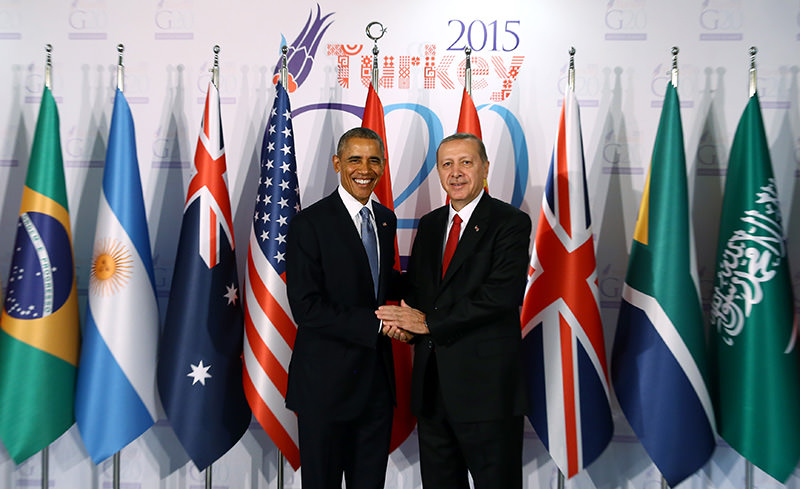 | AA Photo
by daily sabah
Nov 15, 2015 12:00 am
Speaking at a joint press conference, President Recep Tayyip Erdoğan and U.S. President Barack Obama underlined the close collaboration between Ankara and Washington and vowed to tackle the threat of terror posed against "the whole of humanity."

Erdoğan and Obama held a bilateral meeting early Sunday and addressed a joint press conference following the meeting. Explaining that the Islamic State of the Iraq and al-Sham (ISIS) was the main point of the discussions, Erdoğan said: "We talked about the fight against ISIS. We found the opportunity to assess the steps to be taken as coalition forces. We will resolutely continue our solidarity to contribute to world peace."

Erdoğan also reiterated his strong condemnation of the Paris attacks that left at least 129 people dead and wounded hundreds more Friday night. He also mentioned the terrorist attacks inside Turkey. "We are faced with a collective notion of terrorism. Terrorism has no religion, race, nation or motherland. We were confronted with collective terrorism in Paris just like we were in Ankara, Gaziantep, Suruç and Diyarbakır," Erdoğan said.

Obama also shared his views following the meeting: "The killing of innocent people based on a twisted ideology is an attack not just on France, not just on Turkey, but it's an attack on the civilized world."

Concerning their meeting, Obama said: "The discussion we had today I think was very helpful in helping continue to coordinate work that we are doing together, to help to fortify the borders between Syria and Turkey that allow ISIS to operate."

Stressing that Turkey and the people of Turkey have taken in 2 million refugees, Obama hailed Turkey as one of the leading countries in providing humanitarian aid in this regard. He added that both leaders discussed which countries could offer help on the issue.

Obama also laid emphasis on the Paris attacks saying: "As we I'm sure each said to [French] President [François] Hollande and the French people, we stand in solidarity with them in hunting down the perpetrators of this crime and bringing them to justice."