World at a point of achieving results, not disintegration, President Erdoğan says at B20 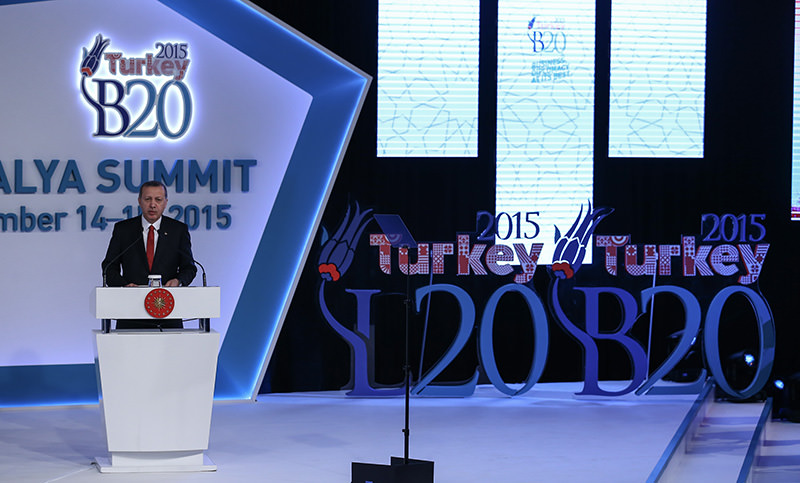 | AA Photo
by Daily Sabah with AA
Nov 15, 2015 12:00 am
President Recep Tayyip Erdoğan on Sunday has said that the world is no longer at a point of disintegration, it is at a point of achieving concrete results.

Speaking at the Business 20 and Labor 20 session prior to the G20 Summit, the president underscored that sustainable economic growth should be accompanied with inclusiveness.

"Growth is not only about numbers" Erdoğan said, adding that the quality of growth is also significant to ensure that all segments of the society benefit from prosperity.

He stated that Turkey sees inclusivenessas a means of creating employment and overcoming inequalities.

Erdoğan urged countries to investigate whether unemployment, poverty and inequality were causes of latest terrorist attacks.

The Turkish president said that the causes of terrorism need to be debated in order to defeat it.

"I am wondering whether world capital and financial sectors are a little bit jealous. I think we have to think about that. When we look at the latest terrorist attacks, we have to wonder whether one of the causes of this terrorist attack is the jealousy. We have to investigate whether unemployment, poverty and inequality caused these terrorist attacks," he said.

"Unemployed young people in the world, if they want to become entrepreneurs, I wonder whether the financial world is supporting them or whether the financial world is supporting unemployed women. In Turkey, we are taking new steps for young people and women who want to make investments, who will be supported by the government. This initiative is very important," he added.

The G20 leaders will agree in Antalya to a common position in the fight on terrorism in light of the Paris attacks, an advisor to Russian President Vladimir Putin said, according to Interfax news agency.

The leaders' final statement will not name "specific countries, regions or groupings," Svetlana Lukash said, adding, "It is rather about a joint approach to questions on terrorism."

The leaders are also expected to agree a common position on managing the refugee crisis.