Erdoğan urges G20 to fight against inequality to overcome terrorism 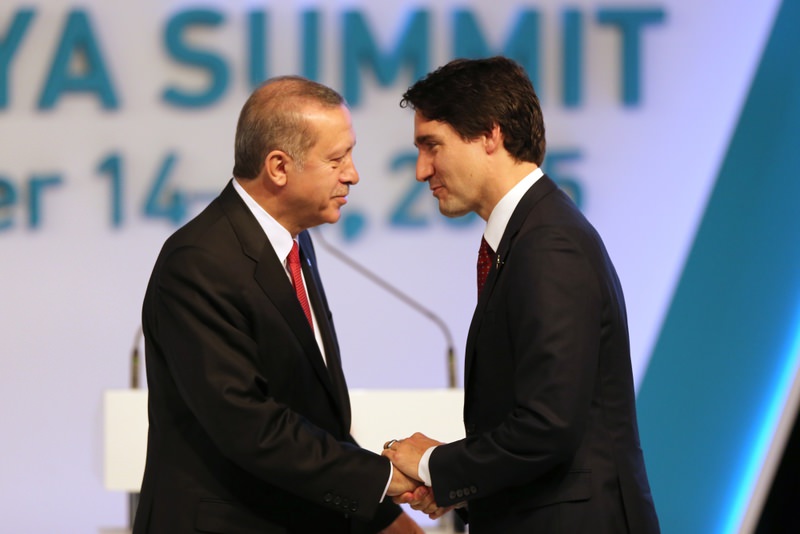 President Erdoğan said jealousy is behind terrorist attacks and pointed to unemployment, poverty and inequality as possible reasons. As included in Turkey's G20 motto, to ensure inclusivity he called the business world to act more generously

President Recep Tayyip Erdoğan on Sunday said the world is no longer at a point of disintegration, but at a point of achieving concrete results. Speaking at the Business 20 (B20) and Labor 20 (L20) session prior to the G20 summit, he said sustainable economic growth should be accompanied with inclusiveness. "Growth is not only about numbers," Erdoğan said, adding that the quality of growth is also significant to ensure that all segments of society benefit from prosperity. He said Turkey sees inclusiveness as a means of creating employment and overcoming inequalities.

"Unemployed young people in the world, if they want to become entrepreneurs, I wonder whether the financial world is supporting them or unemployed women. In Turkey, we are taking new steps for young people and women keen on making investments and who will be supported by the government. This initiative is very important," he said.

The general director of the International Labor Organization (ILO), Guy Ryder, said one of the achievements of Turkey's G20 presidential term is the comprehensiveness to become both a message and a result.

At the session moderated by Coca Cola CEO Muhtar Kent, Ryder said the joint declaration was a success and that the B20 and L20 are adding value to the efforts of the G20. He said the messages delivered to the G20 by the business and the labor world were clear and that it is important for the B20 and L20 to interact not only in the international arena but also locally. "In other words, what efforts will they show in dialogs and collective labor agreements? The declaration basically focuses on the importance of improving qualifications, employment of youngsters, providing support to SMEs [small- and medium-sized enterprises] in terms of infrastructure, active labor market policies and support for growth, as these are the main factors that will help increase employment," Ryder said.

Underlining that labor and the business world need to work together to increase comprehensiveness in work places, Ryder said the implementation of declarations is key. Ryder further pointed out that another crucial issue for developing countries is to decrease the gray economy and improve the registered economy and labor.

Spanish bank BBVA's CEO Francisco Gonzalez also said that growth should be the main target of all countries and facilitating access of SMEs to funding is another crucial target. "More data is required on SMEs and they need to become more recognized by banks," Gonzales said.

Emphasizing the importance of providing new funding tools for SMEs, Gonzalez also said financial regulations should be improved and a balance should be formed between growth and financial macro-stability.

The vice president of the China Council for Promotion of International Trade (CCPIT) and B20 China sherpa, Yu Ping, said that as next year's president, China should strive as hard as Turkey and many issues discussed this term will also be discussed at next year's B20 summit. Ping said they want the G20 to take a more active stance in certain areas and that the institutionalization of trade and investment cooperation is an urgent and crucial requirement.

The chairman of the Turkish Union of Chambers and Commodity Exchanges (TOBB) and the B20, Rifat Hisarcıklıoğlu, said at the Business 20 (B20)-Labor 20 (L20) Common Meeting titled "Main Session with G20 Leaders: More Comprehensive Framework for Growth and Employment," held with the participation of President Recep Tayyip Erdoğan and Canadian Prime Minister Justin Trudeau that an increase is required in global trade.

Hisarcıklıoğlu also said this is the first time in the history of the G20 that businessmen, labor organizations and leaders are discussing economic issues and that since citizens want welfare, economic progress is required, especially an increase in the global trade. He further said the growth in global trade this year will be 2 percent only, the same figures as during the global economic crisis.

He also said it is important for all countries to approve World Trade Organization's (WTO) Trade Facilitation Agreement and that currently the global economy needs more transparency, better infrastructure and advanced investment strategies. International Monetary Fund (IMF) Managing Director Christine Lagarde drew attention to employment and suggested more infrastructure investments to create jobs. Lagarde said infrastructure investments should be supported as they are a major force that drives economic growth forward in the short and long term and generates employment. Emphasizing that infrastructure is the short- and long-term propelling force behind economic growth in many countries around the world, Lagarde said all infrastructural investments, including the construction of bridges, highways, schools and hospitals, create employment anywhere in the world. Stressing that it is of great importance to incentivize infrastructure projects, Lagarde said international financial institutions will continue to work on infrastructure. It is significant to support Islamic finance, which might play a major role in growth, she said, adding: "It is important to bring together the public and private sectors for cooperation on infrastructure projects. Such cooperation, which is traditionally low in number, should be boosted."