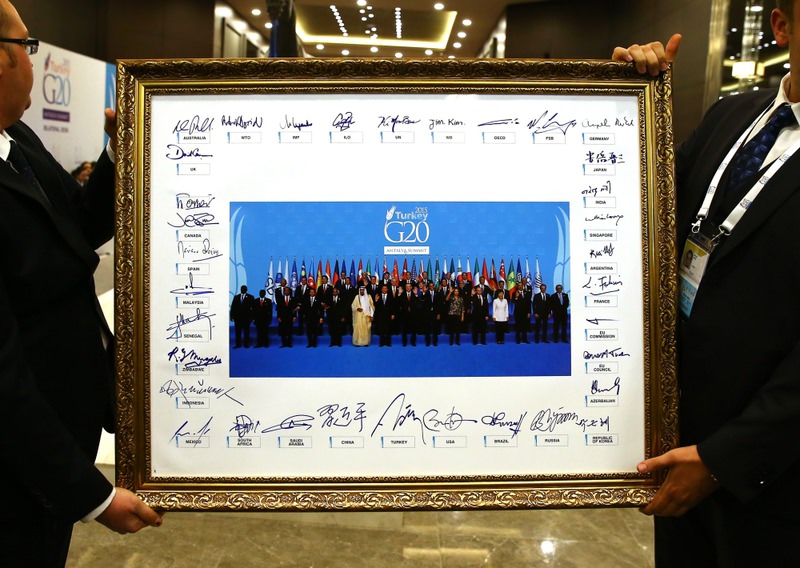 G20 leaders signed their family photo along with the final declaration of the summit held in Antalya.
by Daily Sabah with Wires
Nov 17, 2015 12:00 am

G20 leaders gave the message of remaining united in combating terrorism to ensure a stronger global economy and sustainable development. Inequality, tax systems and climate change were also emphasized in the final declaration

In the wake of the attacks in Paris on Friday, world leaders at the summit of the Group of Twenty (G20) largest economies in Antalya said greater security and stability are needed if the world economy is to grow. "We remain united in combating terrorism. The spread of terrorist organizations and significant rise globally in acts of terrorism directly undermine the maintenance of international peace and security [as well as] endangers our ongoing efforts to strengthen the global economy and ensure sustainable growth and development," G20 members said in a draft statement released yesterday.

In a second draft communique, the leaders of the world's 20 most powerful countries vowed on Monday to increase collective actions toward achieving strong, sustainable and balanced growth.

The heads of G20 are determined to ensure that economic growth is robust and inclusive, and delivers more and better quality jobs. "We recognize that advancing inclusive growth and entrenching confidence requires the use of all policy tools and strong engagement with all stakeholders," the draft said. "We remain resolute to continue our collective action to lift actual and potential growth of our economies, support job creation, strengthen resilience, promote development and enhance inclusiveness of our policies," the leaders added.

"In pursuing our objectives, we have adopted a comprehensive agenda this year around the three pillars of decisive implementation of our past commitments to deliver on our promises, boosting investments as a powerful driver of growth and promoting inclusiveness in our actions so that the benefits of growth are shared by all" the draft said. Investment, inclusiveness and implementation are the three priorities of the Turkish presidency of the G20 this year.

The leaders said that they will "carefully calibrate" and "clearly communicate" their actions, "especially against the backdrop of major monetary policy decisions, and other policy objectives, to mitigate uncertainty, minimize negative spillovers and promote transparency."

ECONOMY: "Global economic growth is uneven and continues to fall short of our expectations," the leaders said. The G20 countries reaffirmed last year's goal of a collective 2 percent increase in their gross domestic product (GDP) by 2018, compared to 2013 values, and say they are more than one-third of the way there.

INEQUALITY: Inequality was also a major issue stressed by G20 leaders. "Rising inequalities in many countries may pose risks to social cohesion and the well-being of our citizens," the G20 summit statement said. President Recep Tayyip Erdoğan said on Sunday jealousy is behind terrorist attacks and pointed to unemployment, poverty and inequality as possible reasons. As included in Turkey's G20 motto, to ensure inclusivity, he called on the business community to act more generously. The leaders say they want to create "more and better quality jobs," and, by 2025, reduce the share of young people "most at risk of being permanently left behind in the labor market" by 15 percent.

TAX AVOIDANCE: The G20 leaders endorse a joint plan to clamp down on corporate tax avoidance in order to "reach a globally fair and modern international tax system." The aim is to make sure that companies pay taxes wherever they make profits and investments. To this end, national tax authorities are to intensify their exchange of tax and banking information.

CLIMATE: The leaders reaffirm the goal of limiting a global rise in temperatures to less than 2 degrees Celsius, and show determination to agree a legally binding deal at next month's global climate summit in France. "The Paris agreement should be fair, balanced, ambitious, durable and dynamic," they said, but without referencing a contested review clause to keep track of progress. The text also includes no mention of plans to provide developing countries with 100 million euros a year from 2020 to mitigate the effects of climate change.
Last Update: Nov 17, 2015 1:30 am