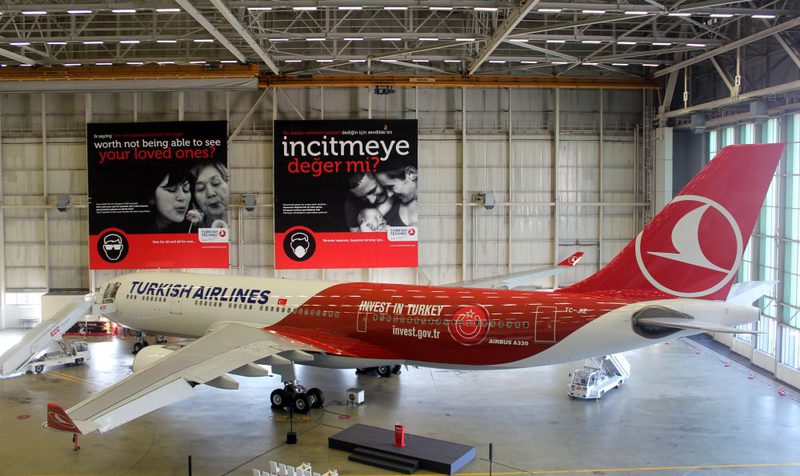 by Daily Sabah Nov 18, 2015 12:00 am
With the objective of attracting foreign investors to Turkey, Turkey's flag carrier, Turkish Airlines (THY), has made an unprecedented move and featured the logo of "Invest in Turkey" on the body of one of the Airbus 330-type planes in its fleet.

THY prepared the project taking the fact that the air carrier offers flights to 50 domestic and 233 foreign destinations into consideration. The logo-carrying plane was introduced by THY CEO İlker Aycı and the Prime Ministry Investment Support and Promotion Agency (ISPAT) President Arda Ermut, during a meeting held at Atatürk Airport's aircraft maintenance hangar.

Underlining that the project will make a major contribution to the promotion of Turkey abroad, Aycı said that the plane, which will fly to all THY foreign destinations, will attract the attention of foreign investors. This is THY's second message aimed at foreign investors, after the password of its wireless Internet was changed to "investinTurkey" in Atatürk Airport's international terminal, with the same objective. Ermut said the synergy between ISPAT, which promotes Turkey's investment environment to global business circles, and THY, which successfully carries the Turkish flag, is increasingly getting stronger.

According to Ermut, the founding of ISPAT "is a major step in Turkey's transformation over the past 12 years to the future and achieving an innovative, competitive and prosperous country" while the agency "endeavors to turn Turkey's potential into investment projects that have high added value and transfer technology." Underlining that the logo-carrying plane will promote Turkey, which is a haven of stability in its region, to international business circles and will create awareness about Turkey's investment environment, Ermut said "this is an opportunity that no investment agency in the world has." Ermut extended his thanks to THY authorities for enabling the agency to promote Turkey in an unprecedented fashion as an airline that flies to the greatest number of destinations in the world.
RELATED TOPICS