Saudi capital to rise in Turkey as political ties improve 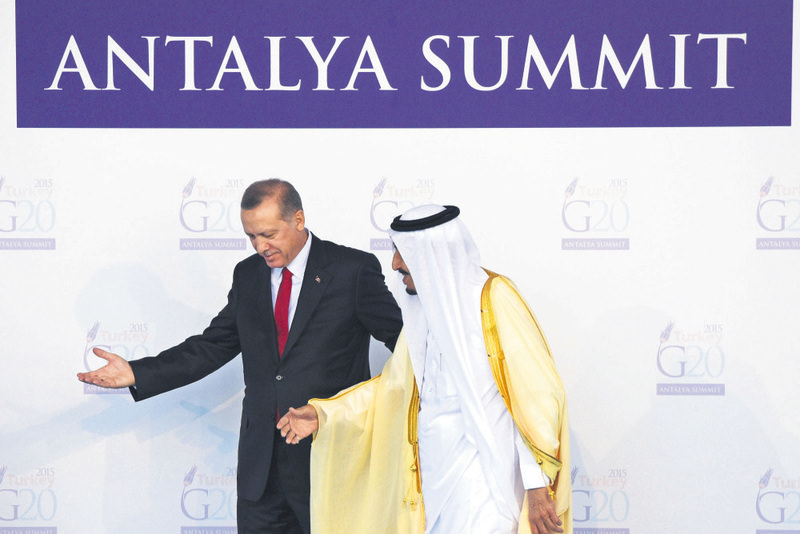 by Daily Sabah with AA
Nov 20, 2015 12:00 am
Turkish businessmen investing in Saudi Arabia said that some of the chronic problems between Turkey and Saudi Arabia were overcome during the G20 Leaders Summit in Antalya and that Saudi capital will take greater interest in Turkey in 2016.

Referring to the fact that the Saudi treasury has declined because of falling oil prices and rising military expenditures, Cevahir said Saudi Arabia will change its route toward Turkey, a stable country that will allow it to earn money securely. Cevahir said that strategic cooperation will function as a driving force in Turkish-Saudi economic relations, adding that the G20 Antalya summit enabled the two countries to overcome chronic problems that stemmed from their different policies on the Middle East. "We expect that Turkey, which is a stable country and a safe haven, will attract more state and private funds from Saudi Arabia as of 2016," he said.

Cevahir also said it is more likely that Saudi capital will flow into Turkey than that Turkish contractors will undertake projects in Saudi Arabia. He attributed this possibility to the fact that Turkey offers greater investment opportunities and has ongoing mega projects that appeal to foreign businessmen.

According to Cevahir, Erdoğan's scheduled visit to Saudi Arabia before the end of 2015 and in 2016 will pave the way for an increase in the number of Turkish construction companies that have the capability to undertake a large amount of knowledge-intensive business in Saudi Arabia. These visits will also help attract Gulf capital to Turkey, he added.

Turkey's consolidated stability will significantly invigorate the monetary activities of individual investors in the country, Mısırlı said, adding that this was clearly seen in a recent real estate fair where a great number of Saudi real estate companies joined in order to finalize their ongoing talks. In reference to the fact that Saudi Arabia is involved in cautionary military spending because of its concerns over Yemen and Iran, Mısırlı said Kuwait is the greatest purchaser in the Gulf region and Kuwaiti capital moves toward safe havens abroad.

Mısırlı said the invasion of Kuwait forced the Gulf's wealthy people to be cautious. Mısırlı said that Turkey is the sole safe haven for Saudi investors considering the uncertainty prevailing in the entirety of the Gulf region and concerns about Iran.

According to Mısırlı, the Gulf's capital holders learned a lesson from the experiences in Kuwait and wealthy people from Kuwait and Dubai are the ones who purchase the greatest number of houses and companies abroad. "They started to take a greater interest in Turkey after the Nov. 1 parliamentary elections ensured stability in the country," he added.

Claiming that all Qatari funds pass through Turkey, Mısırlı said state funds will also flow into Turkey with the increase in cooperation between Turkey and Saudi Arabia.

Turkey is looking to attract state-managed funds, as well as individual ones, Mısırlı said, adding that the visits of countries' leaders and bilateral agreements cause giant funds to flow into the country.