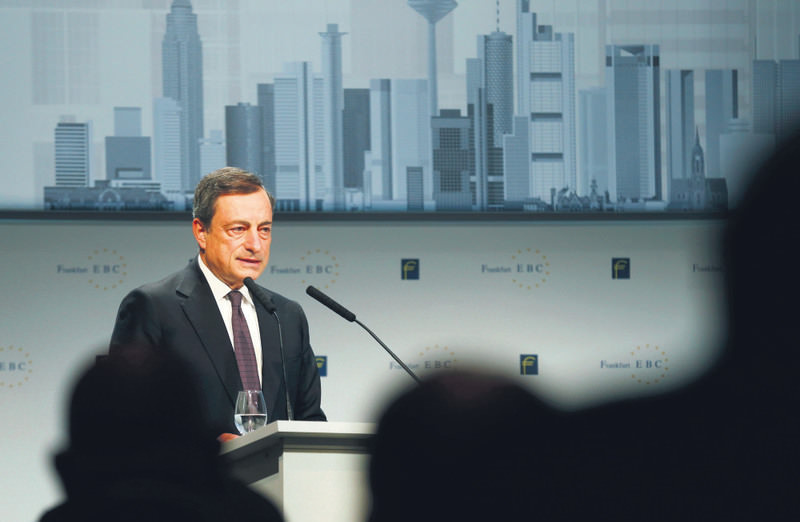 European Central Bank President Mario Draghi said the ECB will do its best to help the European economy recover, which pushed shares to a three-month high, signaling a possible expansion in the stimulus program if necessary

European Central Bank head Mario Draghi said the chief monetary authority for the eurozone "will not hesitate" to expand its stimulus program at its next meeting if needed to support the economic recovery. Draghi's speech at a banking forum in Frankfurt on Friday reinforced earlier statements taken by markets as a green light for the bank to take action at the Dec. 3 meeting of its governing council. He said the ECB needed to assess whether "if left to its own forces, the economy will be able to achieve a self-sustaining trajectory...If not, then it will require more monetary stimulus."

Europe's recovery is important for the troubled global economy, which has seen growth slow in emerging markets such as China even as Europe and the United States recover from the financial crisis of 2007-2009 and the eurozone's troubles over government debt.

The ECB could increase its 1.1 trillion euro ($1.2 trillion) program of bond purchases, which injects newly printed money into the economy. It could also lower its rate on money deposited at the ECB by banks farther into negative territory, a move that pushes the banks to lend more. Currently, that rate is minus 0.2 percent.

Draghi argued that the current stimulus has had a strong effect in supporting the economy, which has this year been growing gradually. He said the ECB's efforts have cut borrowing rates for companies and increased their access to the credit they need to do business and expand.

Lower fuel prices are also helping demand by putting more money in consumers' pockets. The 19 countries that use the euro currency saw economic activity grow 0.3 percent in the third quarter from the quarter before. That was less than expected, and unemployment remains high at 10.8 percent.

Draghi warned that the modest recovery is facing headwinds from an economic slowdown in emerging markets. And he said that increased growth has not led to a pickup in inflation, which at an annual 0.1 percent remains far below the ECB's goal of just under 2 percent. Draghi's remarks were countered by cautionary statements at the forum from stimulus skeptic Jens Weidmann, who sits on the ECB's policy-setting council by virtue of his job as head of Germany's national central bank, the Bundesbank.

Weidmann said current measures need time to work, and that weak inflation is largely due to low oil prices, which are a boost for the economy. "All things combined, I see no reason to talk down the economic outlook and paint a gloomy picture," he said.

Weidmann has only one vote on the 25-member governing council, and his views appear to be in the minority among the bank's leadership. But his stance carries weight because he's from Germany, the biggest eurozone economy. There, his outlook is shared by many economists, legislators and members of the public.

One consequence of more stimulus should be a lower euro against other currencies, especially the dollar. While not an explicit goal of the ECB, a weaker euro has been one of the major results so far of the bank's stimulus and has provided a boost to eurozone exporters.

The downward pressure on the euro versus the dollar is also coming from the Federal Reserve, which is expected by many to raise interest rates for the first time in years at a Dec. 15-16 meeting. Higher rates in the U.S. tend to raise the dollar's exchange rate against other currencies. Investors appear to have already priced in, or anticipated, more stimulus Dec. 3. That did not prevent the euro from edging down further on Friday, from around $1.0720 before Draghi's comments to around $1.0689.
RELATED TOPICS