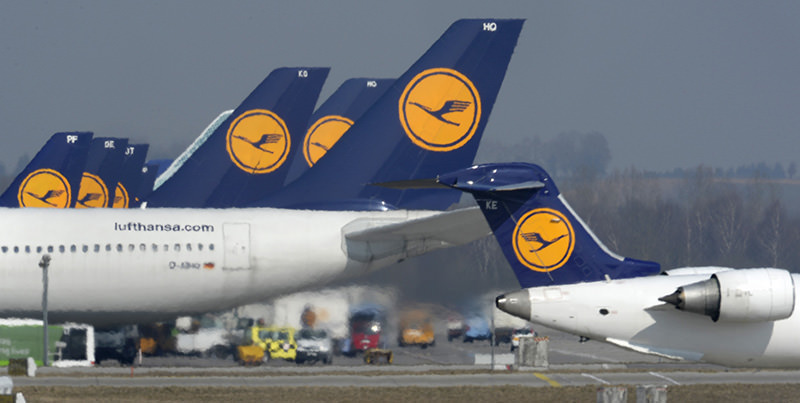 by Anadolu Agency Nov 23, 2015 12:00 am
Germany's Lufthansa is facing more industrial action as cabin crews get ready for a two-day strike later this week.

The UFO labor union said its members would go on strike between 26-27 Nov. in a long-running row over pensions. UFO staged a seven-day walkout earlier this month, forcing Lufthansa to cancel around 4,700 flights.

A statement from UFO on Monday accused the airline's management of failing to bring forward any new proposals to overcome the deadlock, despite the union's call last week for new talks. "Due to the lack of any improved proposal by the management on pension schemes and transitional care, UFO's board decided this morning to call for a walkout this week," said union official Birgit Weinreich.

UFO chief Nicoley Baublies said the walkout would not extend to Saturday and Sunday, due to the significance of Advent weekend for most of passengers. However, he also warned that strikes may continue early next week, if their demands are not heard by management.

Lufthansa criticized the move, accusing the union of an unwillingness to talk. "We are extremely disappointed that the union apparently has no willingness for dialog, while it is clear that we can only reach a solution through talks," Bettina Volkens, Chief Officer Corporate Human Resources, told German press agency DPA.
Last Update: Nov 23, 2015 7:33 pm
RELATED TOPICS