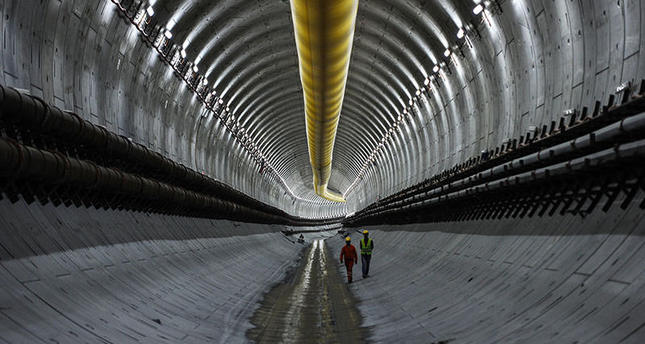 by Daily Sabah Nov 26, 2015 12:00 am
The Eurasia road tunnel project, regarded as one of the best engineering works in the world, is 85 percent completed as of Wednesday. Once finished, the tunnel will connect Istanbul's Asian and European sides through an undersea tunnel to run underneath the Bosporus strait.

Mustafa Demir, the mayor of Istanbul's Fatih district, attended a contact meeting on road expansion work between the Yenikapı and Yedikule neighborhoods on the European side. Following the meeting, he obtained information about the construction work from site manager Necil Engür. Demir said the construction of the Eurasian highway crossing tunnel, heralded as a "visionary project" by President Recep Tayyip Erdoğan, stands as a testament to Turkish engineering. He also noted that the project, which was imagined by the Ottomans 100 years ago but could not be actualized, is now being realized today, and this is a source of pride for the nation.

The construction of the tube tunnel is almost over, with approximately 85 percent of it having been completed. The interior structure of the tunnel has largely been completed and a total of 900 employees are working day and night to complete the tunnel. The tunnel consists of two layers, one going in each direction. The drilling work has been carried out with a giant digging machine designed specifically for such projects. The excavation work has been completed in a shorter time than scheduled thanks to the 120-meter-long and 13.4-meter-wide rotary excavator. The drilling machine, which is one of the largest of its kind, will help connect the Asian and European continents for the second time after Marmaray.
Last Update: Nov 26, 2015 2:09 am
RELATED TOPICS