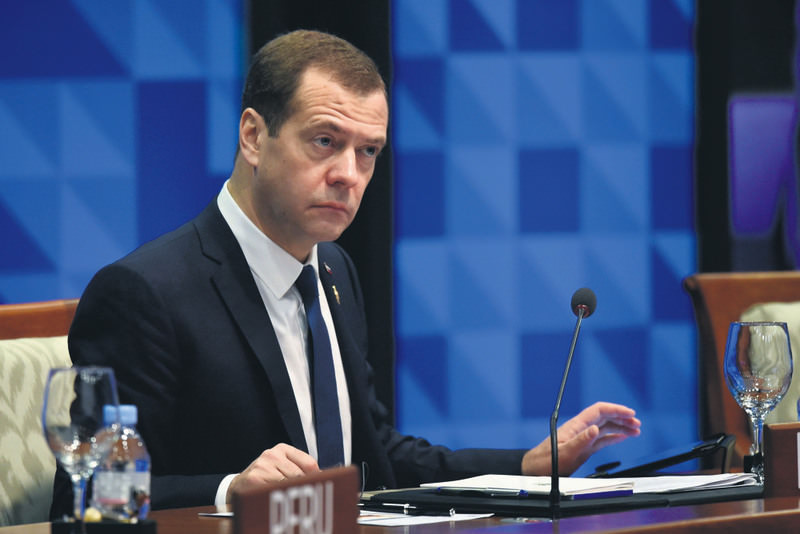 Russian Prime Minister Medvedev threatens Turkey on the consequences of downing the Russian warplane, which might result in the cancellation of joint projects. On the other hand, biding contracts and concern over keeping an already damaged reputation restrict overreactions

Russian Prime Minister Dmitry Medvedev said Wednesday that the downing of the Russian Sukhoi-24 fighter jet by Turkey could result in the cancellation of crucial joint projects. Medvedev said that the long-standing friendly relations between Russia and Turkey, including economic and cultural relations, have been undermined, according to a statement released on the Russian government's website. "This damage will be difficult to repair. The direct consequences are likely to be the renunciation of a number of important joint projects and the loss of Turkish companies' positions in the Russian market," added Medvedev. On the other hand, Russian Deputy Energy Minister Anatoly Yanovsky was more cautious on Tuesday, pointing out the financial benefits of binding contracts. Yanovsky stated that Russian gas supply to Turkey would continue without incident under the ongoing contract terms. Speaking to the official Russian news agency, TASS, Yanovsky said that no other option is currently being considered.

Early on Tuesday, a Russian Sukhoi-24 fighter jet that was violating Turkish airspace in southern Hatay province was downed by Turkish F-16 fighters. Turkish officials stated that they didn't know the jet belonged to Russia and that the country's right to protect its borders must be respected. Amid rising political tensions, the two countries economic relations reached the agenda. Last year, Turkey purchased 27.4 billion cubic meters of natural gas -- worth around $6.5 billion -- from Gazprom, which makes Turkey the biggest importer of Russian natural gas. The two countries are also collaborating to establish a new undersea pipeline crossing the Black Sea to carry Russian natural gas to Europe via the Turkish-Greek border, dubbed Turkish Stream, along with the ongoing Akkuyu Nuclear Plant project in southern Mersin province.

Russia is still trying to achieve an economic recovery after being hit by decreasing oil prices. Since half of the country's revenues depend on oil and natural gas, losing its reputation as a reliable supplier, would not benefit Russia, according to experts.

Speaking to the Anadolu Agency (AA), Dr. Erdal Tanas Karagöl said that economists do not expect energy relations to be effected by the situation. "I don't believe that Russia would set international agreements at naught and cut the gas supply to Turkey. This would mean committing hara-kiri," said Karagöl. Even if Russia were to act unexpectedly, Turkey would cover its natural gas demand with liquid natural gas (LNG) from Qatar and Algeria, according to Karagöl. However, the risk of losing its biggest customer as well as its reputation is a risk that the struggling Russian economy is unlikely to take. Russia's reputation as a reliable supplier has already been damaged since European countries began working on different projects to diversify suppliers, thus reducing their dependency on Russia. Turkey and Russia's economic relations do not rely solely on natural gas. The nuclear power station in Akkuyu, a district in the southern province of Mersin, is being built by Russia's nuclear agency, Rosatom. Turkey launched the construction of its first nuclear power plant in April, a $20 billion project, to establish self-sufficiency in the energy sector. Russia currently has $3 billion invested in Turkish banks for the project.
RELATED TOPICS