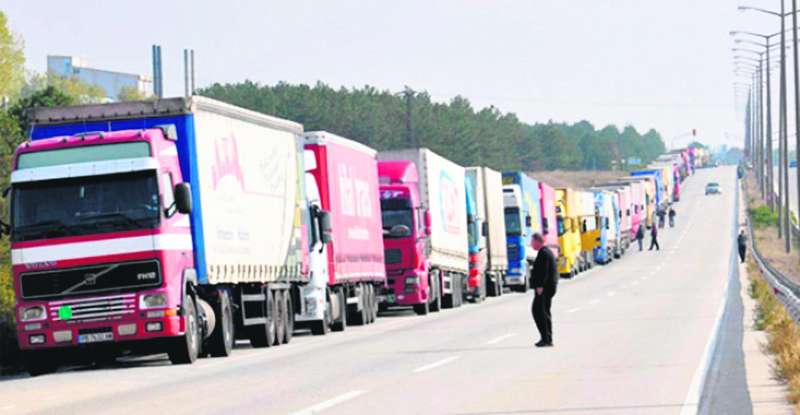 by Daily Sabah Dec 08, 2015 12:00 am
Russia has been imposing harsh economic sanctions to put pressure on Turkey over the past week. Meanwhile, according to an announcement made by Economy Minister Mustafa Elitaş, Turkey's ally Azerbaijan decided to give a 40 percent discount on transportation fees incurred by Turkish trucks traveling between the two countries. Accordingly, the discount will come into effect as soon as possible. Elitaş said that he expects that the 40 percent discount in transportation fees will be start this week, adding that per the request of the Prime Minister Ahmet Davutoğlu and President Recep Tayyip Erdoğan, the preferential trade agreement between Turkey and Azerbaijan will hopefully be put into effect this month.

Azerbaijan gave a 40 percent discount for trucks with high tonnage traveling to Turkmenistan and Kazakhstan while making a 20 percent discount for the Ro-Ro ships to use the Caspian route in order to reach Kazakhstanis port as a result of the decision taken by the Azerbaijan Transit Transportation Council. Hence, according to the new regulations, the one-way Ro-Ro transportation cost will be $1,200 and the two-way transportation cost will be $2,100. Also, as Elitaş declared, the minor procedural problems arising from visa requirements will also be terminated. Regarding the issue, Foreign Minister Mevlüt Çavuşoğlu previously explained the situation to his Azeri counterpart Elmar Memmedyarov, who later discussed it with Ilham Aliyev. Aliyev showed his support for Turkish exporters with plans to ease visa procedures and not impose penalties on trucks which do not have transit documents. In addition, after Russia closed its roads to Turkish trucks to spite Turkey for the downing one of its warplanes, Turkish trucks have had to wait for days at the Georgian-Russian border.

Azerbaijan President Aliyev ordered the routes to be opened for Turkish trucks who aim to reach Central Asia. The Azerbaijan-Caspian Sea-Turkmenistan route, which is actually a shortcut for the vehicles, may become a permanent rout as well. In response to this favor, Elitaş also thanked Aliyev. Furthermore, Economy Minister Mustafa Elitaş said "as an outcome of our negotiations with the natural gas and oil exporting countries such as Qatar, Azerbaijan, Northern Iraq and other countries, we have been working on minimizing our energy dependency on Russia."
RELATED TOPICS