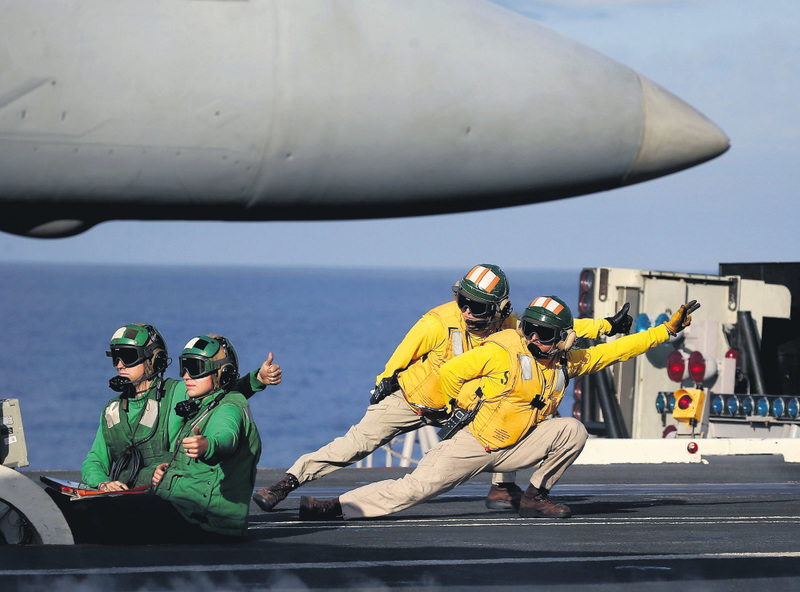 A flight deck crew prepares to launch an F18 Super Hornet from the deck of the US Eisenhower off the coast of Virginia, December 10, 2015 in the Atlantic Ocean.
by Anadolu Agency Dec 12, 2015 12:00 am

Historical GDP data, which indicates a notable increase throughout the war years, raises a question about whether wars serve the U.S. economy instead of typically causing economic recession

U.S. Gross Domestic Product (GDP) is on the rise, and as the U.S. boasts the largest defense sector in the world, war strengthens its economy instead of causing stagnation. Normally war damages a country's economy, but the U.S. seems to be an exception. According to data collected by Anadolu Agency (AA), in the U.S., which has spent only 31 years out of the last 115 not at war, GDP increased every time the country went to war.

The U.S. entered World War I in 1917 and its GDP increased 9 percent that year. All the other countries involved in the fighting went through recessions. The economies of France, Austria and Germany shrank by 36 percent, 26.7 percent and 18 percent, respectively.

While the U.S. did not actually enter the Vietnam War, being fought 19,000 kilometers away from U.S. borders until 1965, it had been providing financial support and military materials to South Vietnam since 1954. On average, GDP increased 3.9 percent during these 10 years during which time the U.S. was passively involved in the war. As soon as the country joined the war, the average GDP increase picked up to around 4.2 percent between 1965 and 1973. The U.S., which was defeated in Vietnam, was also involved in wars in Zaire, Grenada, Panama, Haiti, Somali, Iran and Iraq. Further, American soldiers also partook in the Bosnia and Kosovo wars together with NATO and United Nation forces. The country's economy seems to grow during periods of war, suggesting that wars revive the U.S. economy.

The U.S. entered the war with Afghanistan - the longest war in U.S. history - after the al-Qaida attacks on Sept. 11, and war was declared on terrorism. The war, which lasted around 13 years, ended on Dec. 28, 2014 when Osama Bin Laden, the leader of al-Qaida, was killed by the U.S.

The war with Iraq was declared in 2003 as the U.S. accused Saddam Hussein of possessing weapons of mass destruction and despite the fact that the war officially ended in 2011, the U.S., this time, could not pull itself from the mire it created in the region.

Possibly the main reason for the U.S. economy thriving during these times instead of going into recession is that the wars tend to take place millions of kilometers from U.S. borders. Thus, there were only a limited number of casualties and no harm to America's production and infrastructure facilities. More importantly, the U.S. defense industry - the number one supplier of all kinds of military equipment and ammunition - grew enormously and contributed to economic growth.

Along with having the biggest defense industry in the world, the U.S. reserved a larger budget for its military expenses than the next 14 highest-spending countries' budgets combined. The defense sector employs 3.5 million people and is the locomotive of the U.S. economy.

Due to the significance of the defense sector for the country's economy, questions asking if wars are the locomotive of U.S. industry or if America depend on wars to grow are often raised. As no nuclear warheads were discovered in Iraq, that many weapons possessed by al-Qaida and DAESH are American-made and that there is an interest group deemed the "war lobby" in the U.S., there are strong arguments to reply in the affirmative to these questions. This data implies that there may actually be economic reasons behind the fact that the U.S. joins wars in different parts of the world.
RELATED TOPICS